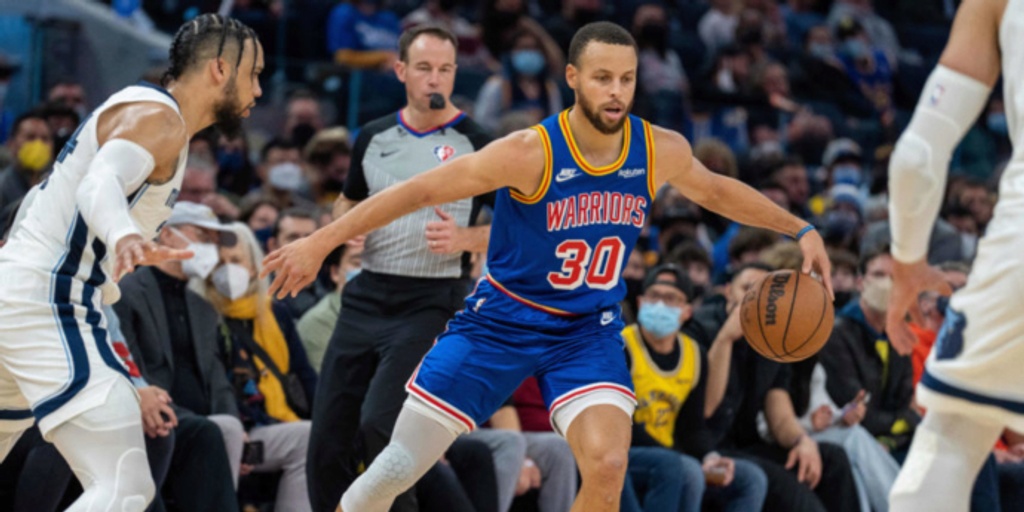 Stephen Curry scored 46 points and made eight 3-pointers, Gary Payton Jr. added a clutch 3-pointer late in the fourth quarter and the Golden State Warriors held off the Memphs Grizzlies 113-104 on Thursday night.

Payton finished with 22 points and Draymond Green had nine assists to help the Warriors improve an NBA-best 16-2 record at home. The Warriors (26-6) remain one-half game behind the Suns (26-5) for the best record in the NBA, with the teams set to meet on Christmas in Phoenix.

“That’s about as good as it gets against a very physical defense with great size,” Golden State coach Steve Kerr said. “Over the last 10-12 games, Memphis had the best defensive rating in the league. For Steph to go out and get 46, he showed every bit of his talent tonight. This was his most efficient game in a couple weeks, for sure.”

The Warriors led comfortably most of the second half before the Grizzlies made a late push and tied it at 102-all on De’Anthony Melton’s layup. But Juan Tosco-Anderson scored on a reverse, Payton made his fourth 3 and Curry scurried past three defenders in the key for a layup to help Golden State pull away.

Curry and Green both noted the significance of the win, citing the Grizzlies victory over the Warriors in the play-in game last season.

“Definitely wanted this one,” said Curry, who twisted his ankle in the fourth quarter but noted he was OK. “Definitely felt like it was one (we) cant let slip by because of the history but also because knowing what it’s going to take to win a game like this. You carry that chip on your shoulder and understand this is our home court.”

Ja Morant had 21 points for Memphis, which had won its previous six road games.

“We got a ton of good looks in the paint, missed 30 shots, couldn’t get our 3-ball going,” Grizzlies coach Taylor Jenkins said. “They’re a hard team to beat. They played really well tonight.

“He had a great offensive night,” Green said. “He found space tonight. Guys did a good job of trying to get him the ball and not forcing it. You let a guy like that get clean looks, it starts an avalanche.”

The Grizzlies got off to a fast start, connecting on 13 of their first 19 shots to take a 10-point lead.

Golden State, which blew a 19-point lead when the two teams played in October, came back to tie it at 51 following Tosco-Anderson’s one-handed dunk and two free throws from Curry.

Curry got the Warriors rolling in the third, making three 3s, including one as he fell flat on his back. The NBA’s 3-point king also made four free throws, fed Payton with a no-look pass for a 3-pointer then added a steal and layup.

“Greatest shooter of all time,” Morant said. “We know he’s going to make shots. We just have to make it very tough for him to get it off. We had some mental lapses during the game and he made us pay for it.”

Grizzlies: Brooks was whistled for a technical late in the second quarter and Kyle Anderson got one while sitting on the Memphis bench early in the second half. … Jarrett Culver has entered into the NBA’s COVID-19 health and safety protocols. … Brandon Clarke missed his 11th game with right knee soreness. … Santi Aldama (right calf soreness) sat out his fourth consecutive game.

Warriors: Curry was four points shy of his season-high of 50. … Green got his sixth technical of the season in the fourth quarter. … Golden State had assists on 16 of its first 19 made shots. … Andrew Wiggins, Jordan Poole and Damion Lee went into the COVID-19 health and safety protocols. … Golden State signed free agent guard Quinndary Weatherspoon to a 10-day contract.

Grizzlies: Face the Kings in Sacramento on Sunday.

Warriors: Play the Suns in Phoenix on Saturday. The two teams have split a pair of games this season, with the home team winning each.