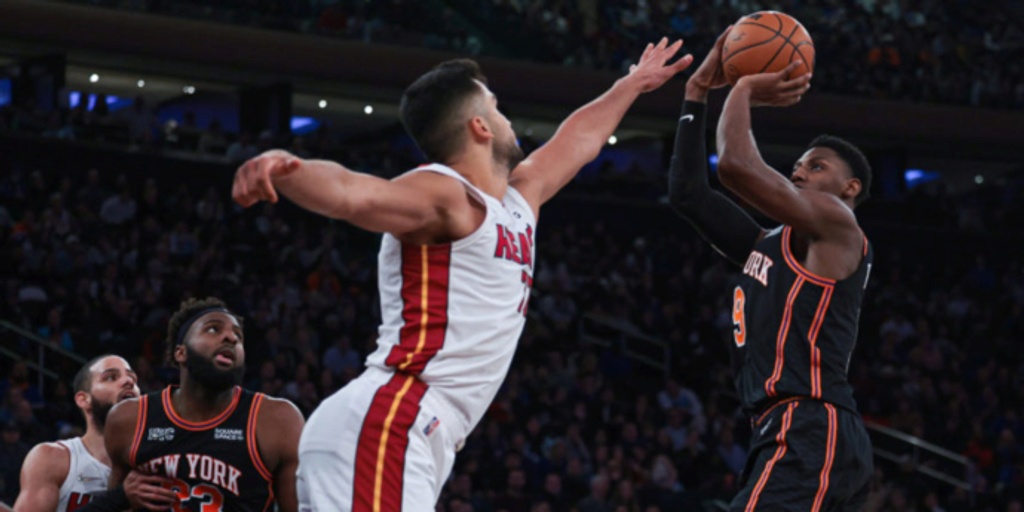 Kyle Lowry added 19 points in the Heat's first game after the All-Star break after they were tied with Chicago for the best record in the Eastern Conference going into it. Bam Adebayo finished with 16 points and 16 rebounds.

Miami started a little slowly in the resumption of its schedule, then shut down most of the Knicks beyond Barrett to run its road winning streak to a season-high six games.

Barrett made six 3-pointers and grabbed nine rebounds in his return from a four-game absence with a sprained left ankle, and his best game as a pro would have been even better if not for 14-for-22 shooting from the free throw line. Julius Randle had 11 points, eight rebounds and eight assists, but shot just 2 for 15.

The Knicks dropped their fourth straight and fell to 25-35. They hoped they were close to getting Derrick Rose back from ankle surgery, only to instead announce he had another procedure on the ankle Friday.

The Knicks were within one with 40 seconds left in the third, but Lowry made four free throws to make it 90-85 heading to the fourth. Miami then opened the quarter by outscoring the Knicks 11-5, with Herro getting two baskets, to go up by double digits again at 101-90.

New York came out of the break 12th in the East and potentially a team that will transition to focusing on its youth. It was decided this week that Kemba Walker, who had been the starting point guard, will shut down for the season and rest his troublesome knee.

Heat: Butler was fined $25,000 by the NBA for failing to comply with media availability obligations during All-Star weekend and not complying with the resulting league investigation. ... Coach Erik Spoelstra said C Dewayne Dedmon practiced Thursday but his back tightened up, so he didn't play.

Knicks: Rookie Quentin Grimes left in the first quarter with right knee injury, the team saying it was a subluxation of the right patella. ,,, MSG broadcaster Walt “Clyde” Frazier got a big ovation in the first quarter when he was recognized as the Naismith Memorial Basketball Hall of Fame's Curt Gowdy Electronic Media Award winner. The two-time champion with the Knicks will become the first player inducted in the Hall of Fame as a player and a broadcaster.

Rose had recently begun practicing fully after he had surgery on his ankle in December. The procedure Friday was because of a skin infection. Coach Tom Thibodeau said Rose was in discomfort but not pain, and there was no timetable for his return.

“He actually went through practice pretty well,” Thibodeau said. “So, just one of those things.”