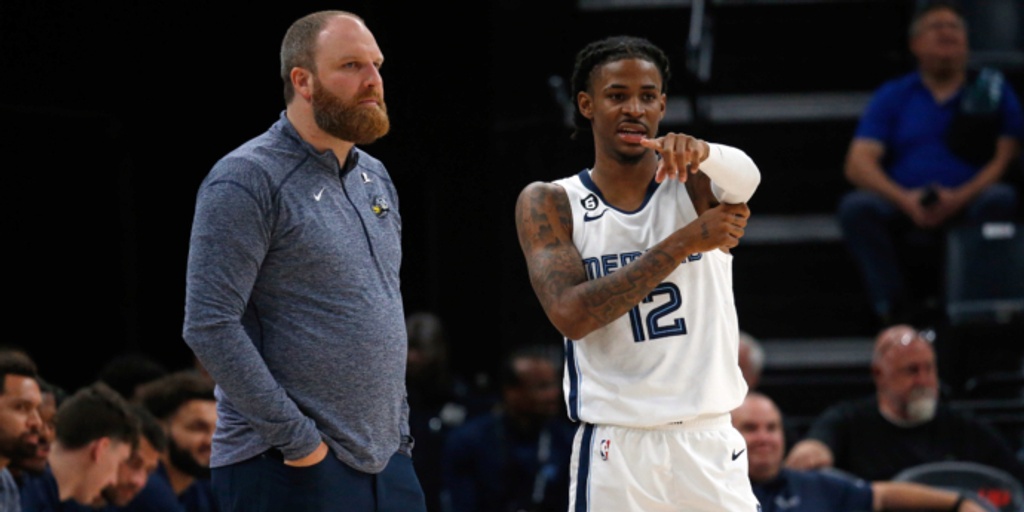 MEMPHIS, Tenn. (AP) — Ja Morant and the Memphis Grizzlies have more experience now along with some painful postseason heartbreak.

What matters most for these still very young Grizzlies? What's next. And they want it all.

"It's no pressure for us,” Morant said. “We didn't win the championship. So for us, it’s pretty much going to the next level, continuing to improve and go win a championship.”

Sounds simple enough for a team that got every point last season from players not yet 30 and still posted the NBA's second-best record. The Grizzlies beat Minnesota in six games for their first playoff series win since 2016.

They lost to Golden State in the Western Conference semifinals in six games, the last three with Morant sidelined by an injured knee. The Grizzlies took that loss as an eye-opening look at just what it takes to play deep into the NBA postseason.

“We understand the habits and the foundation and things we have to develop in order to make that run and make it happen,” guard Desmond Bane said.

Memphis set a high bar. The Grizzlies won a franchise-record 56 wins and their first division title while also locking up the No. 2 seed in the Western Conference.

The point guard has gone from NBA Rookie of the Year to an All Star and Most Improved Player in his third season. He wants much more, though Morant will only say stay tuned for opening night Oct. 19 against the New York Knicks to see exactly what he spent this offseason working to improve.

Morant has talked about trying to build up his body to better survive driving to the bucket. Coach Taylor Jenkins said Morant came to the the staff at season's end with a list of areas he had targeted, including 3-point shooting.

The All-Star also has seen the player rankings and made very clear he's not satisfied.

“I got eight more spots to go,” Morant said. “That’s another one of my motivation coming in at nine. I’m trying to be No. 1.”

Center Steven Adams got a two-year extension early in training camp. Dillon Brooks and Brandon Clarke are in the final years of their contracts. Kleiman said the team feels strongly about those players.

“We view them as as potential long term pieces of this group, and we’ll see how things play out,” Kleiman said.

With Jaren Jackson Jr. recovering from surgery to fix a stress fracture in his right foot, the Grizzlies will need a fill-in for the power forward coming off his best season yet. Options include Santi Aldama, Brandon Clarke or possibly rookie David Roddy.

Jenkins mentioned top draft pick Jake LaRavia as an option when Memphis goes with a smaller lineup. When Jackson returns, he has a big goal for himself: Being voted Defensive Player of the Year after being named to the NBA’s All-Defensive first team.

The 30th pick out of TCU in the 2020 draft finished fifth in the voting for Most Improved Player in his second season. Bane leads the NBA shooting 46.4% outside the arc with a minimum of 600 attempts since he entered the league.

“The way he’s built it doesn’t look like he should be a basketball player,” Green said. “But he’s very effective. It’s crazy to see that he shoots shoot the ball very well with, you know, how strong he is and how compact he is.”