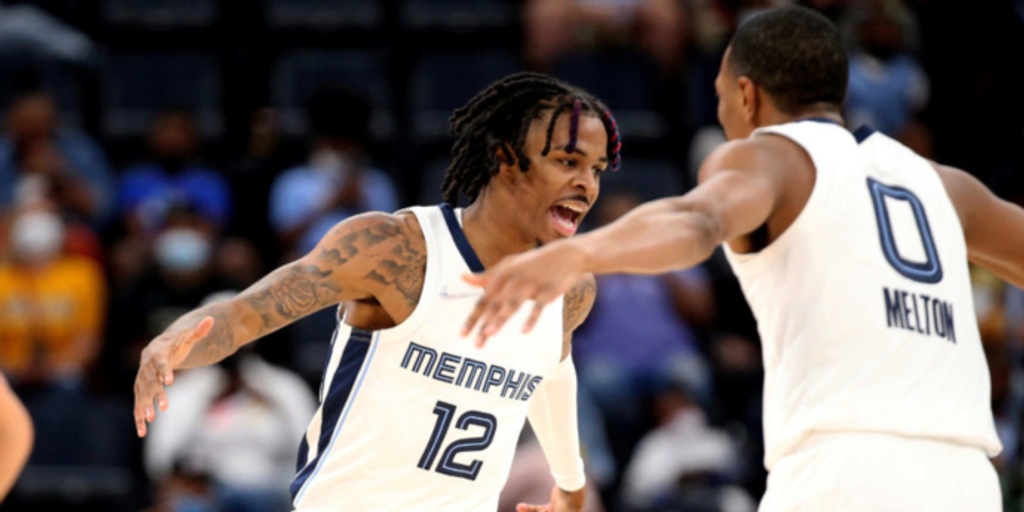 The Memphis Grizzlies are in no mood to linger over winning not one, but two NBA play-in games just to reach the playoffs for the first time in four years.

These young Grizzlies have so much more in mind with winning championships the eventual goal.

“We want to do that in Memphis as soon as we possibly can," general manager Zach Kleiman said. "I’m not going to be unrealistic and put timeframes on that. But there’s a lot of belief in this group. And we want to continue to build off of last season. And I have a lot of confidence that this group will be able to.”

The Grizzlies beat San Antonio, then Golden State to earn the No. 8 seed in the West. Then they beat Utah to open their first-round series before losing in five games. Memphis spent the summer healing and preparing for a pivotal season.

Whether the Grizzlies improve on their 38-34 record of last season will depend largely on the continuing development of their two young stars.

Jaren Jackson Jr. just turned 22 last month but played only 11 games last season as the Grizzlies went cautiously with his recovery from knee surgery. Ja Morant turned 22 in August, and the point guard who led Memphis in scoring with 19.1 points a game last season has much more in his sights this season.

No matter what happens, the Grizzlies potentially have three first-round draft picks next summer with the team's books in good position with the salary cap to further tweak the roster.

The Grizzlies see the 6-foot-11 Jackson, the fourth overall draft pick in 2018, as a cornerstone piece of this franchise. Morant is the other, though they haven't played that many games together yet through two seasons. They spent plenty of time together this offseason to hone their chemistry.

“He's able to do so much on the floor,” said Morant, the 2020 NBA Rookie of the year. “We weren’t able to play a lot due to injuries. Both our goals this offseason was to work on our bodies, make sure we’re healthy and have a healthy season, healthy career.”

The Grizzlies have a big decision on Jackson. They can extend him before Oct. 18 or see what Jackson does over a full season. A member of the NBA All-Rookie team, he improved his scoring and minutes before a knee injury knocked him out of the NBA bubble at the end of his second season.

Jackson has heard all the talk of how much is expected of him.

Memphis had 16 players average at least 10 minutes last season, and the roster remains just as deep even with double-double regular Jonas Valanciunas now in New Orleans replaced by Steven Adams and Grayson Allen traded to Milwaukee. The Grizzlies moved Patrick Beverly quickly to Minnesota for Jarrett Culver, a first-round pick in 2019.

Then the Grizzlies traded up to select Ziaire Williams at No. 10 overall.

Coach Taylor Jenkins has to figure out how to use all the players on his roster, starting with how much to play Jackson at center and where to put Kyle Anderson who played at power forward much of last season with Jackson out. Anderson noted Utah, the NBA's top team last season, had a roster that easily went 10 deep.

“I think we have something very similar, if not better, over here than that," Anderson said.

Dillon Brooks goes into his fifth season with Memphis targeting a spot on the NBA's All-Defensive team. He loves to talk trash and aggravate the person he's guarding into just a miserable night. And Brooks usually is guarding the opponent's best player like the playoffs when he guarded Donovan Mitchell.

The Grizzlies open the season Oct. 20 hosting the Cleveland Cavaliers before going on a four-game road swing. The challenging portion will be January with nine road games and February with seven away from Memphis and only three at home. They conclude the schedule with two home games, including the season finale against Boston on April 10.