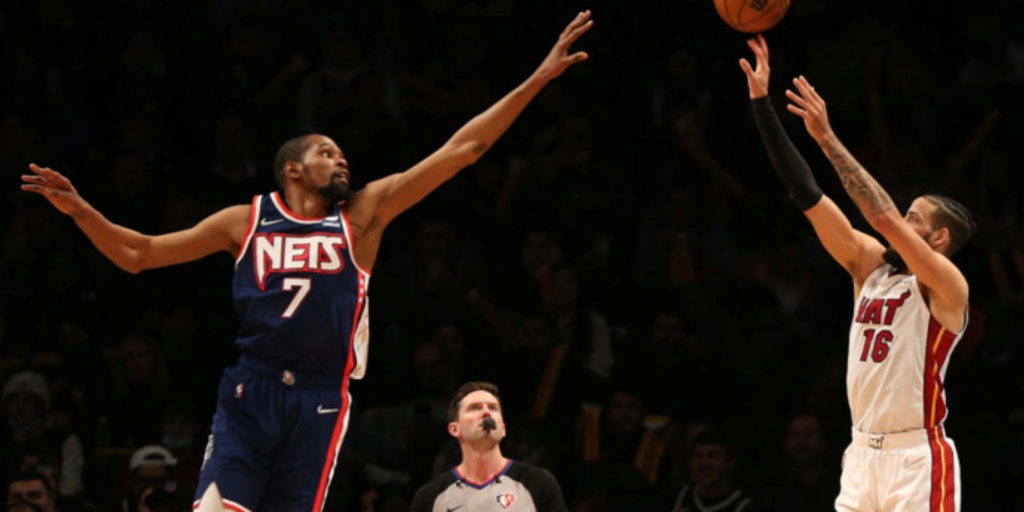 Kevin Durant's return couldn't stop the Brooklyn Nets' slide, as Bam Adebayo had 30 points, 11 rebounds and six assists to lead the Miami Heat to a 113-107 victory on Thursday night.

Tyler Herro added 27 points for the Eastern Conference-leading Heat, who bounced back from a tough loss in Milwaukee a night earlier with an impressive victory despite missing some of their top players.

Durant had 31 points in his first game since Jan. 15 and his return from a 21-game absence inspired the Nets to a 16-point lead. But Miami tightened up its defense in the second half and held off a late surge by the Nets.

Durant had a 3-point attempt from straightaway that would have given the Nets the lead go in and out with 57 seconds left, and the Heat worked it inside to Adebayo on the ensuing possession for a 111-107 advantage with 35 seconds to go.

The Nets were 5-16 without Durant, tumbling all the way from second place in the Eastern Conference to eighth. Only the Knicks (3–16) and Rockets (3–15) had been worse since Jan. 16, according to the Elias Sports Bureau.

Brooklyn was still without Kyrie Irving and Ben Simmons on Thursday, so even Durant wasn't enough against the Eastern Conference leaders. Bruce Brown scored 21 points.

Caleb Martin added 22 points for Miami, and Max Strus had 21.

The Heat were without Jimmy Butler (left big toe), Kyle Lowry (personal reasons) and P.J. Tucker (left knee) on the second night of a back-to-back. They fell 120-119 in Milwaukee, a game they lead by 14 point lead midway through the fourth quarter.

Durant missed 3-pointers on his first two shots, then made his final four of the first quarter for nine points and a 35-23 lead.

He still had those nine points with under 2 1/2 minutes remaining in the half, then converted a three-point play, knocked down a jumper and a 3-pointer for eight points in a minute as Brooklyn took a 67-60 lead to the break.

Heat: Miami shot 51.9% from the field. ... Duncan Robinson missed all three shots but had seven assists.

Nets: The Nets announced in a statement that Joe Harris would have another surgery on his left ankle and miss the remainder of the season. Harris, who led the NBA in 3-point shooting percentage in two of the last three seasons, has been trying to return after having surgery on the ankle Nov. 29. Brooklyn used its 36th different starting lineup, most in the NBA this season.

Simmons' back began acting up as he tried to build up his conditioning after not playing at all this season for Philadelphia. General manager Sean Marks said in an interview with team broadcaster YES Network that Simmons has been rehabbing the injury for the last week or so and would next move to individual work.

“Hopefully by the end of next week he’s getting more into the team environment and then we can really ramp up and start him getting into sort of game shape and so forth,” Marks said, adding there was no timetable for when Simmons could play.