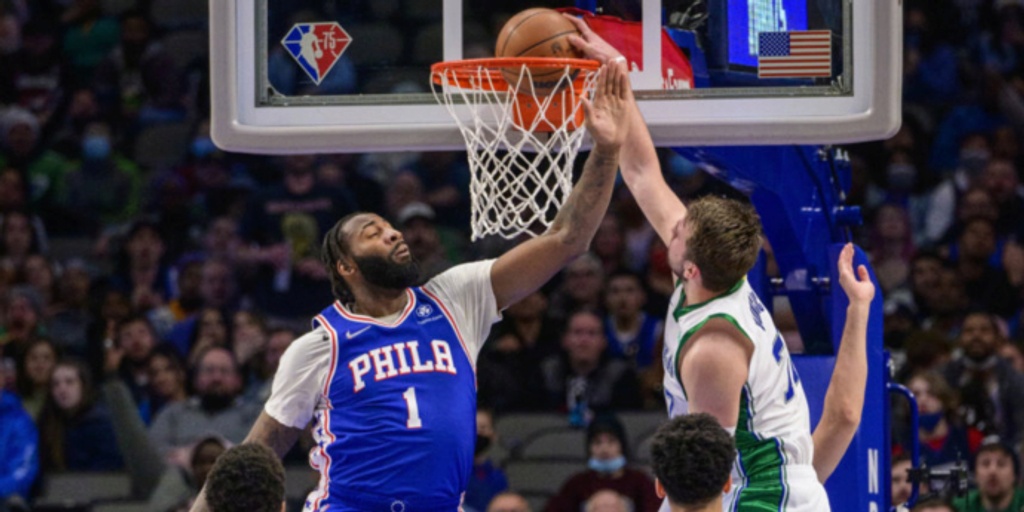 DALLAS (AP) — Luka Doncic had 33 points, 13 rebounds and 15 assists for his 44th career triple-double as the Dallas Mavericks rallied from a 16-point, second-quarter deficit and beat the Philadelphia 76ers 107-98 on Friday night.

The game was delayed 44 minutes midway through the first period when one of the rims was determined to be crooked.

Reggie Bullock scored 20 points, including two clutch 3-pointers down the stretch, for Dallas. Jalen Brunson added 19 points for the Mavericks, who snapped a two-game losing streak.

“To stay with it and to understand that the game wasn’t won or lost in the first couple of minutes coming back just shows a lot of character for that group in there,” Dallas coach Jason Kidd said.

Joel Embiid had 27 points and 13 rebounds for the 76ers, who have lost two straight games for the first time since a three-game skid in mid-December. Dallas native Tyrese Maxey added 18 points.

“We should have really blown them out,” said Embiid, who had his 23rd double-double in 40 games this season. “We gave them life.”

After trailing 63-53 at halftime, a Dallas lineup missing big men Kristaps Porzingis and Maxi Kleber because of injuries outscored Philadelphia 54-35, thanks in part by employing a zone defense.

“We didn’t practically do the zone this whole season,” Doncic said. “It was amazing to see people talking. If you talk, you’re going to do great on defense, and that’s what we did tonight.”

“A few times this year we’ve been pretty bad against the zone,” said Seth Curry, the former Maverick who led Philadelphia with 3-for-6 shooting from 3-point range. “We’ve got to figure out ways to attack. Obviously after tonight, we’re going to see it again.”

With Philadelphia leading 89-88 midway through the fourth quarter, Dallas went on an 8-2 run that included Bullock hitting consecutive 3-pointers for a 96-91 lead that it never relinquished.

Bullock made his 14th start of the season, his first since early January, with big men Kristaps Porzingis and Maxi Kleber out due to injuries.

It was the eighth triple-double this season for Doncic, who was selected Thursday as an All-Star reserve after starting the previous two games. He broke a 10th-place tie with “Fat Lever” for career triple-doubles and matched a season high with 15 assists.

The delay took place with 6:03 left in the first quarter when one of the baskets came out of alignment. Before the arena maintenance crew went to work, 7-foot-4 Boban Marjanovic of Dallas unsuccessfully tried to yank it back in place. The entire hoop, backboard and stanchion had to be replaced.

“It was enough time for us to get our defense right,” Bullock said.

76ers: Philadelphia shot 56.4% during the first half. … Embiid’s 12 free throw attempts (nine made) in the first half exceeded his average of 11.1 per game, but he shot only two in the second half. … Seth Curry returned to the 76ers’ lineup after missing the previous game with back spasms.

Mavericks: … Brunson scored all 11 of his first-half points in the second quarter.

76ers: At Chicago on Sunday. They’re 2-0 against the Bulls this season.

Mavericks: Host Atlanta and Trae Young, whom they traded to acquire Doncic during the 2018 draft, on Sunday in the third game of a season-long six-game homestand.