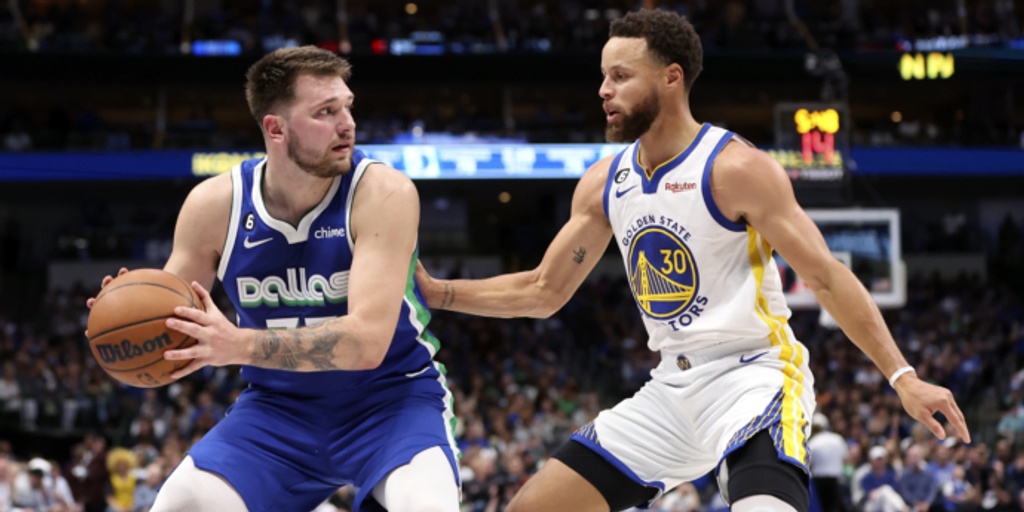 The fourth quarter had plenty of playoff intensity as the Mavericks ended a four-game losing streak, their longest in two seasons under coach Jason Kidd.

The Warriors, who beat the Mavericks in five games last spring on their way to the title, lost for just the second time in seven games after a slow start to their season.

Stephen Curry scored 32 points for Golden State, including a quick-draw 3-pointer over Maxi Kleber for a 110-108 lead, but Dallas responded by scoring the next five points to go ahead for good.

The Warriors were down two when Curry was called for traveling — the 10th of the game between both teams — with 10 seconds remaining.

Golden State had one more chance after Dorian Finney-Smith missed one of two free throws to keep the deficit at three. Klay Thompson got a good look off for 3, but the shot was short as Curry's Splash Brother finished 1 of 6 from deep with five points.

Doncic had 12 rebounds in his 51st career triple-double.

Jonathan Kuminga had 14 points and 10 rebounds for Golden State, which trailed by 17 in the first quarter but took its first lead before halftime.

Spencer Dinwiddie scored 14 points for Dallas before he was ejected for a flagrant-2 penalty when his elbow hit Jordan Poole in the face on an offensive foul early in the fourth quarter.

Warriors: Kuminga and Anthony Lamb had eight points apiece off the bench in the second quarter, combining to go 7 of 8 from the field. Lamb hit consecutive 3-pointers early in the quarter. Lamb scored 11. ... Draymond Green had his third consecutive double-figure game with 12 points.

Mavericks: Four-time All-Star G Kemba Walker signed, but the timeline for him to play is uncertain. The club hopes to get him on the court for practice Wednesday. The 32-year-old with a history of knee issues was unsigned the first six weeks of the season.

Warriors: Chicago visits Friday to start a three-game homestand. The Warriors have a 10-game winning streak in the series.

Mavericks: A two-game trip starts Thursday in Detroit before the first meeting with former Dallas guard Jalen Brunson and the New York Knicks in a Saturday matinee game.