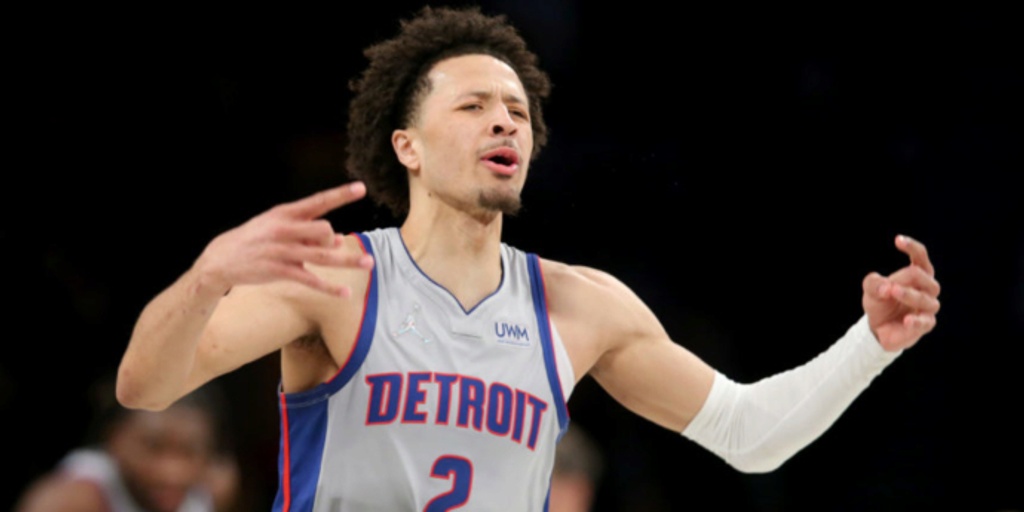 Cade Cunningham was one of the only players on the court more than an hour before a recent game, dribbling at different paces to practice moves to his right and left while pulling up for jumpers at varying distances.

Even though Cunningham's future with the Detroit Pistons is secure as the No. 1 pick from the 2021 draft and as a leading candidate to win NBA Rookie of the Year, he was breaking a sweat as if he was trying to keep his job.

Clearly, the 6-foot-6 guard knows he has a lot of work to do.

The three-time championship franchise does, too.

Detroit was 23-59 this season, finishing ahead of just Houston and Orlando at the bottom of the league standings. While the Pistons are mired in a rebuilding project that has lasted longer than a decade, picking Cunningham was a choice that has panned out and provided at least one reason for hope.

He overcame an ankle injury that stunted the start of his career to average 17.4 points to lead all rookies, ranked second in his class with 5.6 assists a game and fifth with 5.5 rebounds over 64 games.

Cunningham's coach, Dwane Casey, vowed that the former Oklahoma State star would not be a bust before the season started. The savvy first-year player proved his coach was right — and surprised him, too.

“I knew he was a basketball junkie, but I didn’t know he had the knowledge of what everybody was supposed to do on the court," Casey said.

Cunningham had a simple explanation when asked about the compliment, saying it was a relatively easy accomplishment compared to playing football.

“As a quarterback, you have to know what 10 guys are doing," he said.

“He’s done an incredible job in his first year,” Kidd said. “He’s probably the favorite to win Rookie of the Year. To be a point guard and do what he does on a nightly basis is impressive.”

Jerami Grant scored 19.2 points per game, leading the team in scoring for a second straight season. The 28-year-old forward, though, was limited by injuries to just 47 games.

Grant is eligible for a contract extension, entering the last season of his three-year, $60 million deal. If the Pistons don't give Grant a new deal, they may want to trade him.

Saddiq Bey, in his second year, broke a single-season franchise record with 211 3-pointers. The 6-8 forward made 20 more shots beyond the arc than Allan Houston did during the 1995-96 season. Bey was also the only player on the team to play in all 82 games, 11 more than center Isaiah Stewart.

The Pistons were pleased with Marvin Bagley III in the 18 games he played after acquiring him from Sacramento in a four-team trade two months ago. The former Duke star averaged 14.6 points with the Pistons, falling just short of his career high from his rookie year three years ago, along with 6.8 rebounds.

Detroit can make Bagley a restricted free agent by giving him a qualifying offer, and Casey sounds as if he would like the 6-11 forward to stay.

“He’s a talent," Casey said “He was drafted No. 2 (overall) for a reason and he showed all of that for us. His ability to score in the low post is uncanny."

The Pistons won just 28% of their games, barely improving upon last year’s clip, but they were better over the last two months of the season. After starting 12-45, Detroit was 11-14 and that included a season-ending, three-game losing skid.