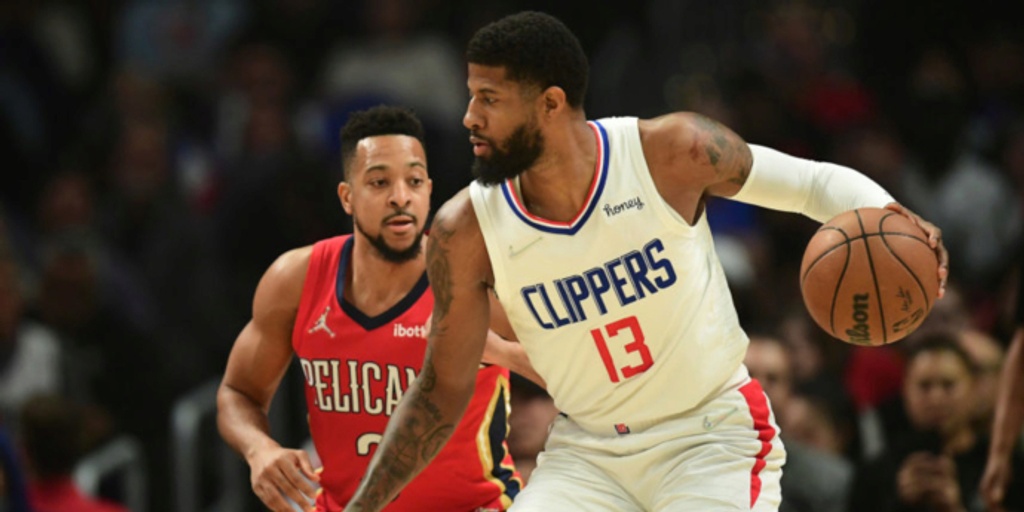 Clippers looking to eke out playoff berth vs. Pelicans

From their first-ever Western Conference Finals appearance to a last-gasp play-in game, the Los Angeles Clippers have been a surprisingly resilient bunch.

They finished two games above .500 despite not having superstar Kawhi Leonard all season and losing Paul George for a big chunk of it. They traded for Norman Powell in February, only to lose him to injury days later.

George and Powell recently returned within days of each other and sparked the Clippers to a five-game winning streak to end the regular season.

They're not ready to head home for the summer.

The Clippers are a four-point favorite against the New Orleans Pelicans in their play-in elimination game Friday night, according to FanDuel Sportsbook.

The Pelicans advanced with a 113-103 victory over the San Antonio Spurs. The Clippers lost to the Minnesota Timberwolves 109-104, which cost them the No. 7 seed and a first-round matchup against Memphis.

“I definitely hope that we keep our spirits high, that we understand we still got another one on Friday, that we control our own destiny,” Clippers guard Reggie Jackson said.

The winner earns the No. 8 seed and a first-round meeting with the NBA-leading Phoenix Suns. The Clippers lost to the Suns in six games in last year's conference finals.

Both teams will be without their superstars.

Leonard continues to work his way back from surgery for a partial tear of his right ACL that occurred in the second round against Utah last year. The team has honored Leonard's penchant for privacy and provided little information about his status.

However, he has maintained a presence around the team and will be on hand Friday.

“Even when PG was out, just having those guys around means a lot to this team, especially a young team,” coach Tyronn Lue said Thursday.

Zion Williamson is progressing in his recovery from a foot injury that has kept him out all season for the Pelicans and has been participating in controlled scrimmages. However, the 2019 top overall draft pick isn't expected to play against the Clippers, although he did steal the show with a pair of windmill dunks during warmups Wednesday.

Even without Williamson, the Pelicans have still got a potent Big Three, so to speak, as the Spurs found out.

CJ McCollum, acquired in a midseason trade, center Jonas Valanciunas, acquired in a trade before the season, and incumbent wing Brandon Ingram combined for 81 points against San Antonio. Valanciunas also had 14 rebounds.

“We have to ride those guys,” coach Willie Green said. “When you get to this point in the season, you’ve got to bump their minutes up a little but more. We’re going to run more plays that go through them and allow them to create for others, and they did a heck of a job” against San Antonio.

George's return to the lineup has positively impacted his teammates.

Ivica Zubac produced double-doubles in his last four regular-season games, averaging 12.3 points and 9.4 rebounds. The 7-footer has been a big factor on the defensive side as well.

Luke Kennard didn't make the trip to Minnesota because of a sore right hamstring, which he had treatment on Thursday. He leads the league in 3-point percentage at 44.9 and averaged 15.8 points in his last six games.

George has been showcasing his playmaking skills, averaging a career-high 5.7 assists. Double-teaming George hasn't been an answer for opponents since he can kick it out to Kennard and 7-footer Isaiah Hartenstein, who is showing a deft touch from long range.

Green guided the Pelicans to a 36-46 record after starting 1-12 in his first season as coach. Now, he faces off against his old team for a playoff berth.

Green was a shooting guard with the Clippers from 2012-14, averaging 5.7 points while playing 16 minutes a game on a team that featured the Lob City trio of Blake Griffin, Chris Paul and DeAndre Jordan.

Green ended his 12-year playing career after the following season in Orlando.

He owns two NBA championships as a Golden State assistant. He was an assistant with Phoenix before taking the Pelicans job.

The Pelicans' rookie trio of Herb Jones, Trey Murphy and Joe Alvarado passed their first postseason test, setting the stage for them to play significant roles against the Clippers as well.

Jones, a second-round pick out of Alabama, guarded Spurs All-Star Dejounte Murray and held him to 16 points on 5-of-19 shooting and five assists. He could wind up on George next.

Jones also scored 12 points, as did Alvarado, an undrafted rookie out of Georgia Tech. Murphy, a first-rounder out of Virginia, had a relatively quiet night but still played 22 minutes and has been an explosive scorer in recent weeks.