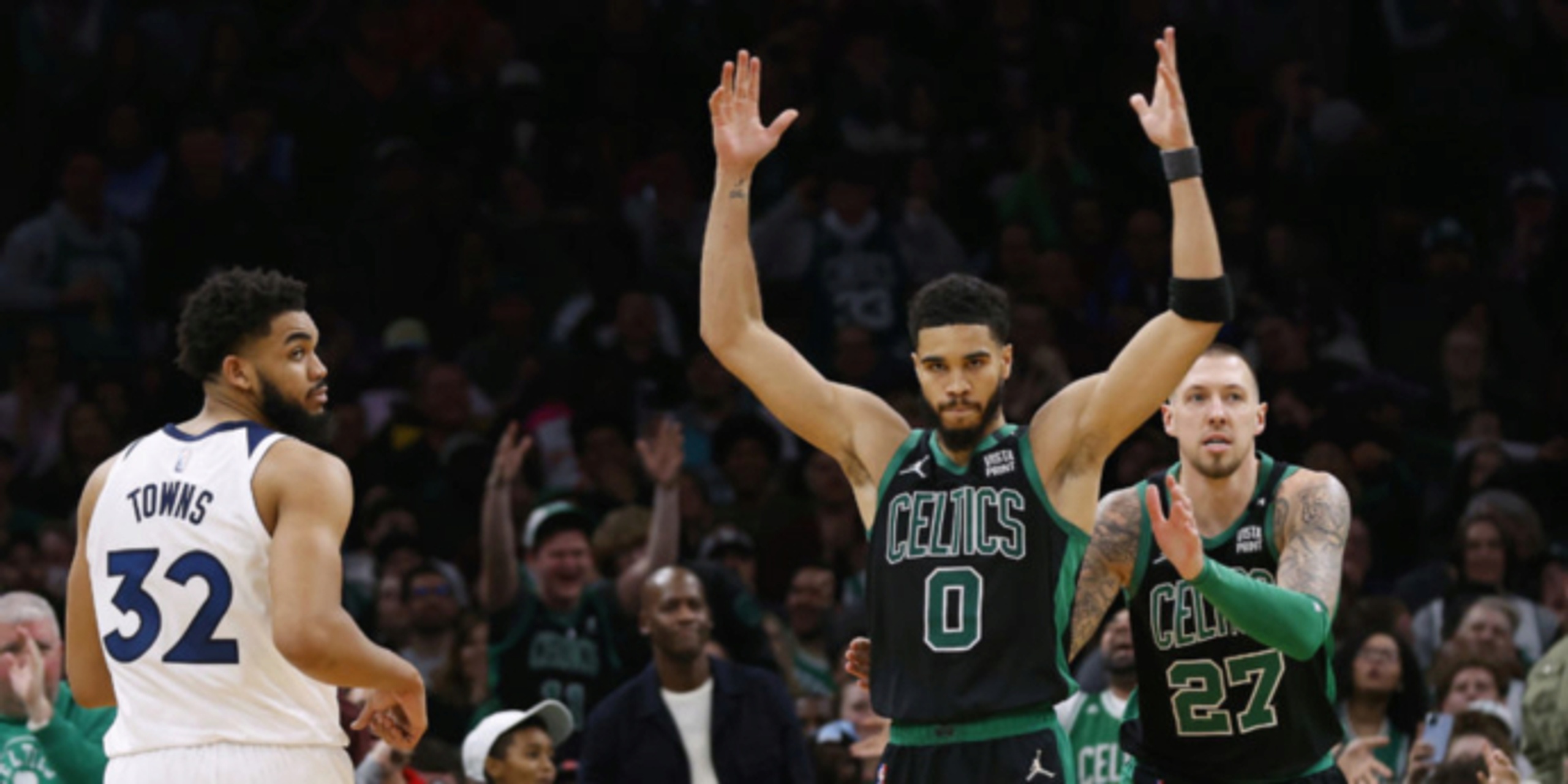 BOSTON (AP) — Celtics coach Ime Udoka has his priorities set for the final push to the playoffs, and trying to figure out Boston's best matchup isn't among them.

“Teams manipulate where they want to play. We’re not concerned about that,” the rookie head coach said on Sunday after the Celtics cruised past the Minnesota Timberwolves 134-112 and climbed to the top of the Eastern Conference.

“There’s too much closeness to try to manipulate things and pick an opponent," Udoka said. “Home court advantage is the main thing, and let the chops fall where they’re going to fall.”

Jayson Tatum scored 34 and Jaylen Brown had 31 points and 10 rebounds to lead Boston to its sixth straight win. The Celtics won for the 24th time in their last 28 games and, combined with the 76ers loss to Phoenix, took over the No. 1 spot in the East.

Boston and Miami have the same record at 47-28. The Celtics have beaten the Heattwice this season, and the teams meet again Wednesday.

“It’s been a journey,” Tatum said. “We had to find our identity. Lost some teammates; got some new guys. We’ve had to battle, but it’s been fun. We had some tougher times, but we’ve benefited from it, and made us better."

This win came at the expense of the team that until recently had been the one of the hottest in the NBA: Minnesota is 12-5 since the All-Star break, winning 10 of 11 before back-to-back losses to Phoenix and Dallas this week.

Anthony Edwards scored 24 and Karl-Anthony Towns added 19 as the Timberwolves opened a four-game road trip with a loss — their third in four games.

The Celtics scored 13 of the first 15 points in the second quarter to open a double-digit lead they never relinquished. It was 72-49 at halftime.

By that point, the only question was whether Tatum would move into the NBA lead in scoring. He did, finishing the day with 1,923 points to pass Atlanta's Trae Young (1,915) for the top spot.

The Celtics star already has one of the top 15 scoring seasons in Celtics history and has seven games left to become the seventh player in franchise history to top 2,000 points in a season. He would join John Havlicek, Paul Pierce, Larry Bird, Isaiah Thomas, Kevin McHale, Sam Jones.

The Celtics were without forward Al Horford, who missed the game for undisclosed personal reasons and is unlikely for Monday night in Toronto. Minnesota missed Malik Beasley, who left Friday night’s game with a sprained ankle.

Brown and Tatum both tested their sore knees before the game and were cleared to play. Robert Williams III, who had 13 points and 10 rebounds, limped off the court at the end of the third quarter with the Celtics up 26, and did not return.

The team said he had a left knee sprain. Udoka said Williams had “quite a bit of pain” but the team would know more after seeing a scan on Monday.

Udoka said some players might sit out against Toronto in the second game of a back-to-back on Monday night — even with the East's top four seeds within a half-game of each other. (Boston and Miami were 47-28, with Milwaukee and Philadelphia at 46-28.)

“As far as rest goes, that’s the main thing,” Udoka said. “We’ve got some guys who’ve got some nicks now and you have to be smart about it.”

The NBA fined Timberwolves forward Taurean Prince $15,000 on Sunday for making an obscene gesture on the court in their 116-95 win over Dallas. At end of the third quarter of Friday night’s game, Prince and Dallas’ Luka Doncic both got technical fouls for exchanging words.

Towns was removed for a substitute late in the third quarter. He walked off the court and straight to the locker room. ... It’s the seventh time this year Tatum and Brown have scored at least 30 apiece.

Timberwolves: At Toronto on Wednesday night.

Celtics: At Toronto on Monday night.