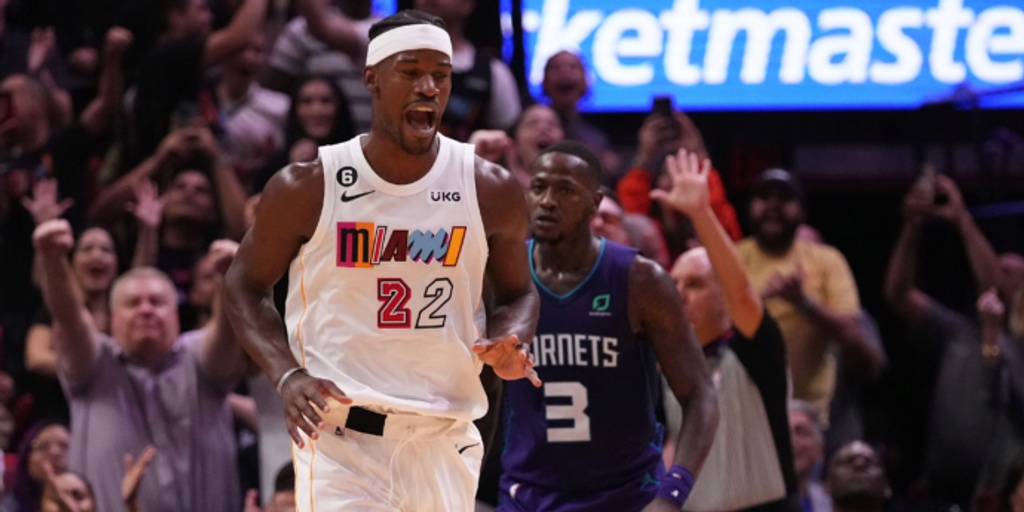 Butler also had 10 rebounds and eight assists for Miami. Bam Adebayo scored 18 points and grabbed 14 rebounds, while Max Strus and Gabe Vincent each had 12 points for the Heat.

Kelly Oubre Jr. scored 29 points for Charlotte, which got 22 from Terry Rozier and 16 from Jalen McDaniels.

Butler scored Miami’s last eight points of regulation, and the Heat played their sixth consecutive game decided by single digits — their longest such streak since a run of eight games in January 2020.

Miami had 30 points off turnovers to Charlotte's 10.

Charlotte got a Miami stop late in overtime and called time, down by one. But the Hornets’ ensuing possession went nowhere — Oubre traveled with 13.1 seconds left almost immediately after the ball was inbounded, Vincent made a pair of free throws to push Miami’s lead to three.

And Charlotte’s next inbounds play was equally disastrous. Rozier threw up a desperation 3-pointer with about 8 seconds left on the clock, the ball bouncing off the side of the backboard, and there went Charlotte’s last good chance.

“I’ve been around teams that didn’t care that much,” Hornets coach Steve Clifford said. “We have a good group. Is it concerning? We’re in a tough spot. I mean, we have no room for error. We have to knock it out of the park here to win right now with what we have. And yet, we’ve done it a couple of times and we can do it again.”

They almost did it Thursday.

The Hornets for 14 seconds in the game’s opening moments, and for the next 3 1/2 quarters, the lead was held nonstop by Miami.

Until midway through the fourth.

Miami led by 12 going into the final quarter and quickly wasted every bit of that edge. A 12-0 run by the Hornets tied the game, and a three-point play by Plumlee with 6:50 left in the fourth put Charlotte up 90-89 — its first lead since 3-0.

The Hornets would lead by as many as four, but couldn't finish it off.

Heat: Basketball enthusiast — and pretty good pickup player — Adam Sandler, the actor and comic who performed shows in South Florida earlier in the week, watched the game from a suite. ... It was Miami’s first overtime game of the season. They were one of nine teams who hadn’t gone to OT entering Thursday.

As Hurricane Nicole was making landfall in Florida on Wednesday night, the Hornets were flying in from Charlotte — their flight path taking them over the storm. But the team barely felt Nicole’s effects and landed in Miami without incident.