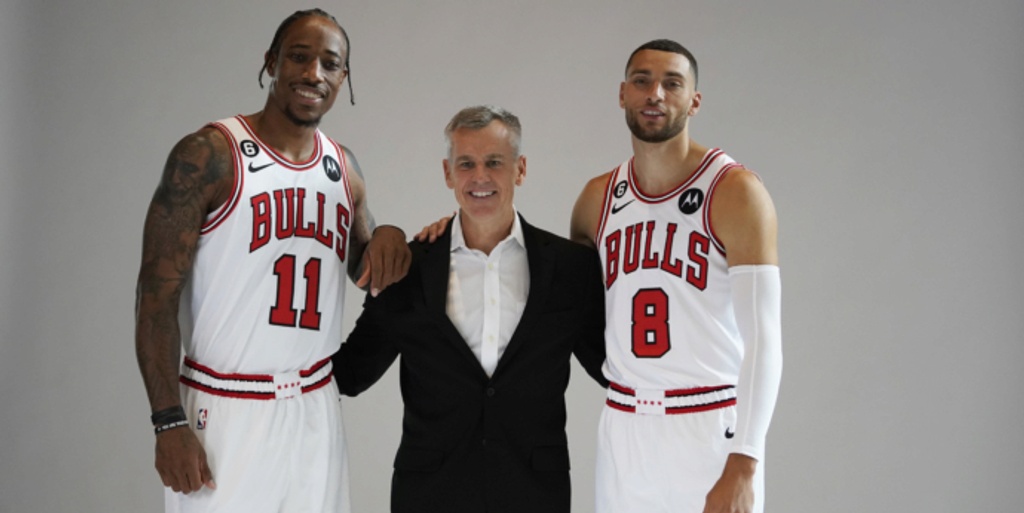 CHICAGO (AP) — The Chicago Bulls made the playoffs for the first time in five years last season and led the Eastern Conference for a little bit.

They have the high-scoring duo of DeMar DeRozan and Zach LaVine and believe they have the talent to compete, even though the Bulls stood pat while the teams around them loaded up.

Still, they're a bit of an unknown — even to themselves.

“I think we need time to see this group play together longer to have any type of conclusion,” executive vice president of basketball operations Arturas Karnisovas said.

Though the Bulls ended a string of four consecutive losing seasons in reaching the playoffs for the first time since 2017, a long line of injuries caught up to them down the stretch. Chicago finished sixth in the Eastern Conference at 46-36 and got knocked out in the first round of the playoffs by Milwaukee.

This season, Chicago is banking on better health and developing more chemistry and cohesion. They are down one key player: Point guard Lonzo Ball will miss at least part of the early season because he needed left knee surgery for a second time this year.

Ball has not played since Jan. 14 and when he will again is anyone's guess. He said prior to the late September operation that he couldn’t run full speed or jump and experienced pain climbing stairs.

He was to be evaluated four to six weeks after the most recent surgery — the third in his career.

Ball had surgery last season for a torn meniscus a few weeks later and experienced setbacks when he tried to ramp up basketball activities. The Bulls had him rest for 10 days at one point, hoping it would resolve the issue and allow him to return. But he felt pain again when he started preparing to play.

Though LaVine averaged more than 24 points and made his second straight All-Star team, the Olympic gold medalist wasn't quite as explosive.

He had arthroscopic surgery on his left knee in May and is looking forward to playing at full strength.

“Man, it could be very, very exciting and scary for other people at the same time,” DeRozan said of LaVine. “I can't tell you how many times I talked to him this summer, just checking on him, just getting that leg back together. I want to be with a healthy Zach. I want him healthy as well.

"A full year of that is something I dream about every single night.”

The Bulls are basically running it back with the same core.

Though they made no splashy offseason moves, they do have a few new faces after drafting Dalen Terry with the No. 18 pick and signing Dragic along with fellow veteran Andre Drummond.

They added some experience and offense in the backcourt with the 36-year-old Dragic and some missing toughness with the arrival of Drummond, a two-time All-Star and four-time rebounding champion.

The Bulls hope the third season is the charm for Patrick Williams.

They want the Florida State product to be more aggressive on offense rather than defer, as well as contribute on both ends of the floor on a more consistent basis than he has since he was the No. 4 draft pick in 2020.

Williams has shown flashes, but a wrist injury that limited him to 17 games last season didn't help.

The Bulls will be tested at the start.

Three of their first four games are against Miami, Cleveland and Boston. They open with a road game against Jimmy Butler and the Heat on Oct. 19. They then visit Washington before hosting Cleveland on Oct. 22 and Boston two nights later.