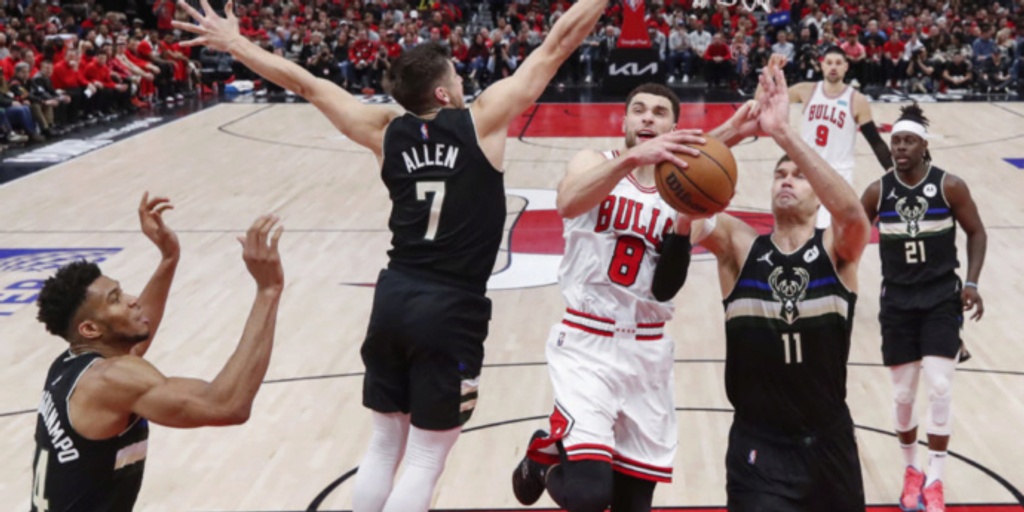 Grayson Allen made five 3-pointers and scored 22 points and the Milwaukee Bucks dominated the Chicago Bulls 111-81 on Friday night to take a 2-1 lead in the first-round playoff series without the injured Khris Middleton.

Giannis Antetokounmpo added 18 points, Bobby Portis had 18 points and 16 rebounds and the defending champion Bucks made it look easy coming off two shaky performances at home.

Coming off two shaky performances at home, Milwaukee quieted a raucous crowd watching Chicago’s first playoff game at the United Center in five years almost as soon as it started. The Bucks led by 24 in the second quarter and remained in control the rest of the way.

Middleton is expected to miss the rest of the series after spraining his left knee in Wednesday night in a loss. Game 4 is Sunday in Chicago.

Antetokounmpo scored all but two of his points after the first quarter. The two-time MVP finished with nine assists and seven rebounds.

Jrue Holiday added 16 points to help the Bucks beat the Bulls for the 18th time in 20 games.

Nikola Vucevic led Chicago with 19 points. Zach LaVine had 15 and DeMar DeRozan finished with just 11 after setting a career playoff high with 41 in Game 2.

The Bucks had it going right from the start, racing out to a 60-41 halftime lead even with Middleton sidelined.

Allen helped squash the “Let's go Bulls!” chants, nailing four 3s and scoring 14 in the half. That had to make it even tougher for fans still upset about his hard foul that resulted in a broken wrist for Alex Caruso during a game in Milwaukee in January. They showered him with boos but couldn't throw him off his game.

Antetokounmpo started a 13-0 run early in the second quarter with a 19-footer and dunk. And Allen finished it with a driving layup that bumped the lead to 46-22.

Bucks: Portis wore goggles after missing most of Game 2 with a right eye abrasion. He took a hit to the face from Chicago’s Tristan Thompson late in the first quarter Wednesday as both players were going after a rebound. ... G George Hill (abdominal strain) missed his fourth game in a row. And coach Mike Budenholzer said he doesn't appear close to returning. ... Milwaukee has won 12 of 13 at the United Center dating to the 2016-17 season

Bulls: The Bulls have not won a home playoff game since beating Cleveland in Game 3 of the 2015 Eastern Conference semifinals. Chicago lost that series in six games. ... Assistant coaches Chris Fleming and Damian Cotter were back with the team after missing the first two games because of COVID-19. Assistant Maurice Cheeks, however, was out because of a non-COVID illness, coach Billy Donovan said.