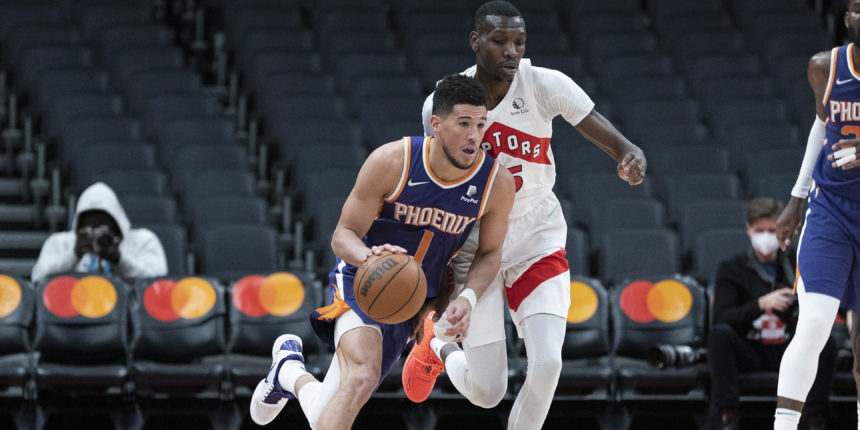 TORONTO (AP) — Devin Booker scored 16 points, including the go-ahead basket with 1:02 remaining, and Chris Paul had 15 points and 12 assists as the Phoenix Suns beat Toronto 99-95 on Tuesday night to snap the Raptors' longest winning streak of the season at six games.

Jae Crowder scored 19 points, Deandre Ayton had 16 and Mikal Bridges added 12 as the Suns improved to 31-9, matching the franchise's best record through 40 games.

OG Anunoby scored 25 points, Pascal Siakam had 22 and Fred VanVleet added 21 for the Raptors, who lost for the first time since Dec. 28 against Philadelphia.

Chris Boucher had 13 points and 16 rebounds for the Raptors, who played without injured starters Scottie Barnes and Gary Trent Jr.

Trent missed his second straight game because of a sore left ankle, while Barnes sat out with a sore right knee.

Booker fouled Anunoby as they scrambled after a loose ball with 1:41 left, and the Toronto forward made both to put the Raptors up 90-89.

After three missed 3-pointers by the Suns, Booker hit a go-ahead jumper with 62 seconds left and, after Siakam missed, Paul’s pull-up jumper made it 93-90 with 32 seconds remaining.

Anunoby cut it to one with a driving basket, but Booker restored the three-point cushion with a pair of free throws.

Toronto’s Khem Birch and Paul each converted a pair of free throws and the Suns sent VanVleet to the line with four seconds left. He made the first and missed the second, but Phoenix’s Jalen Smith grabbed the rebound and Ayton pushed the lead to four with a pair of free throws.

VanVleet scored 10 points in the first as Toronto led 31-23 after one, but Crowder answered with 13 points in the second as the Suns cut the deficit to 48-46 at halftime.

Siakam hit a tiebreaking jumper with 8.8 seconds left in the third to give the Raptors a 71-69 lead heading to the fourth.

Suns: F Cam Johnson (left ankle) was not available after being injured in Saturday’s loss to Miami. … G Landry Shamet returned after missing the past three games while in the health and safety protocols. … F Justin Jackson (personal) did not travel to Toronto. Phoenix coach Monty Williams said Jackson could rejoin the team Friday in Indiana. … F Ish Wainwright (health and safety protocols) was not available. … Phoenix signed C Bismack Biyombo for the remainder of the season.

Raptors: Siakam had four assists in the first quarter. He finished with seven. … Yuta Watanabe missed the previous four games after entering the health and safety protocols.

Raptors: Begin a five-game road trip at Detroit on Friday.