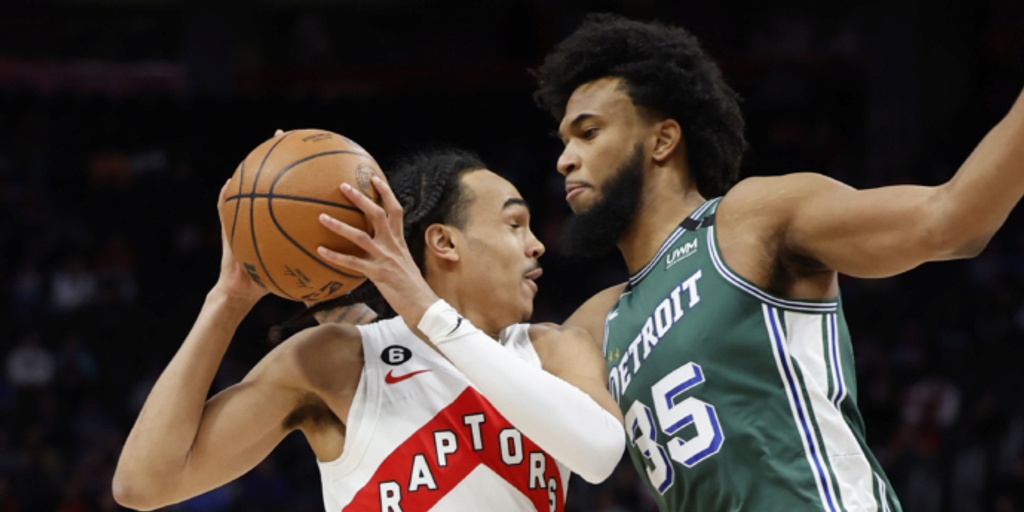 DETROIT (AP) — Dalano Banton scored 27 points and Chris Boucher added 20 as the short-handed Toronto Raptors snapped a three-game losing streak with a 115-111 win over the Detroit Pistons on Monday night.

Detroit trailed by as many as 14 point before Hamadou Diallo hit two free throws with 7:37 remaining to cut the deficit to 94-93. Banton hit a 3-pointer that put the Raptors up six with 4:54 remaining before Isaiah Livers' 3-pointer made it 103-100.

But, the Pistons committed a key turnover — their 19th of the game — and missed their 12th free throw, slowing their rally.

Pistons coach Dwane Casey juggled his lineup, going with two bigs in Isaiah Stewart and Marvin Bagley III, and using Saddiq Bey as a scorer off the bench. Stewart, though, played only 13 minutes before leaving with a sprained right foot.

The Raptors led 58-51 at halftime, thanks to 14 points from Banton and 13 from Boucher. Toronto then scored the first seven points of the third quarter. They led 88-77 going into the fourth quarter, aided by 10 missed free throws from the Pistons.

Raptors: Toronto won despite shooting 29.6% on 3-pointers and committing 17 turnovers that led to 24 points by Detroit.

The Pistons debuted their green jerseys designed to pay tribute to the mats on the walls of the gym at St. Cecilia's Church, located about five miles from Little Caesars Arena. The “Saint” opened in the 1960s and became the center of the Detroit basketball scene when Hall of Famer Dave Bing trained there during a holdout. He was followed by local stars like Magic Johnson, Isiah Thomas, George Gervin, Chris Webber and Glen Rice. It even hosted multiple generations, with Pistons star Jimmy Walker playing there in the 1970s before his son, Jalen Rose, arrived in the 1990s.