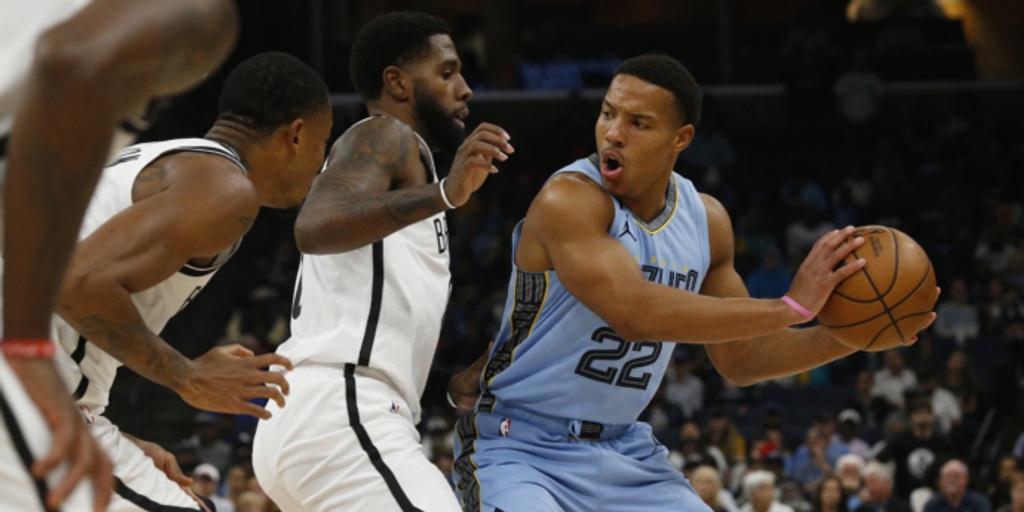 MEMPHIS, Tenn. (AP) — Ja Morant and Desmond Bane scored 38 points each to lead the Memphis Grizzlies to a 134-124 victory over the Brooklyn Nets on Monday night.

Morant and Bane also each had seven assists each. Bane, who struggled shooting to start the season, was 14 of 21 overall and 8 of 11 from 3-point range, the eight 3-pointers a career-high. Santi Aldama scored 17 points for Memphis.

Kevin Durant and Kyrie Irving each scored 37 points for the Nets, Nic Claxton finished with 16 points.

Memphis broke open a close game with a 17-2 run early in the third quarter. Bane scored 19 in the period. Durant was able to keep the Nets close but had little help as the Grizzlies extended their lead to as many as 15. Despite Durant’s 17 in the quarter, Memphis outscored the Nets 45-28 in the third.

Memphis never relinquished its lead in the fourth.

Things got testy in the second quarter as Durant and Dillon Brooks began chirping at each other enough to draw double technicals, two of several in the first half. Those and a pretty steady stream of foul calls kept the game from gaining any pace.

Through the half, the Nets relied on its two-pronged scoring attack with Irving and Durant, along with inside help from Claxton. Morant with an assist from Aldama fueled the Grizzlies offense.

Neither team would build its advantage to double digits before halftime.

Nets: Durant passed Alex English (25,613) for 20th on the NBA’s all-time scoring list. … Have a seven-game losing streak to Memphis. …Markieff Morris was out for personal reasons. Coach Steve Nash said Morris would not be available for Wednesday’s game at Milwaukee. “We’ll see him when we get back home.”

Grizzlies: F Dillon Brooks, listed as questionable before the game with a sore left thigh, made his first appearance of the season. …Bane’s previous career-high for 3-pointers was in February against Portland. .Entering the game, Bane was 8 of 28 from 3-point range. …C Steven Adams had 13 rebounds

Nets: Play the Bucks in Milwaukee on Wednesday.

Grizzlies: Start a four-game road trip on Thursday in Sacramento against the Kings.