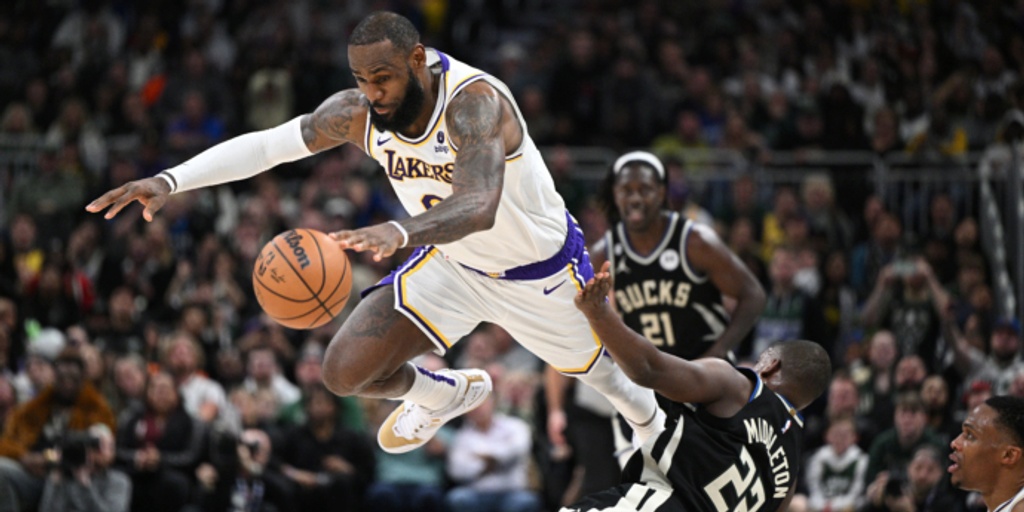 Davis and James helped give Lakers coach Darvin Ham a triumphant return to Milwaukee. Ham worked on Bucks coach Mike Budenholzer’s staff from 2018-22, and the former colleagues shared a big hug before the game.

The Lakers withstood a 40-point night from Milwaukee’s Giannis Antetokounmpo, who also had seven rebounds and five assists. The Lakers also spoiled the seasondebut of Milwaukee’s Khris Middleton, who had 17 points and seven assists in his return from offseason wrist surgery.

During a fourth quarter that featured three ties and six lead changes, James put the Lakers ahead for good by sinking a tiebreaking 3-pointer with 3:22 left.

James finished with 28 points, 11 assists and eight rebounds. He improved his career assist total to 10,144 and moved into sixth place on the list, ahead of Johnson (10,133).

LeBron James has officially passed Magic Johnson for the 6th most assists of all-time.

History for the 👑 pic.twitter.com/tE5s3gSqSg

Heat scoring leader Jimmy Butler returned to the lineup and had 25 points in 36 minutes after missing the previous seven games with a sore right knee. He added 15 rebounds.

Kyle Lowry chipped in with 20 points before fouling out in OT for the Heat, who sent Boston to just its second loss in 16 games.

Brown sent the game to overtime by banking in his long 3 with 1.7 seconds to play in regulation. He finished with 37 points.

Boston star Jayson Tatum scored just 14 points on a cold shooting night, going 5 of 18 from the floor, including 0 of 7 on 3-point attempts. He had 49 points in the Celtics’ 134-121 victory on Wednesday night.

PHOENIX (AP) — Jalen Green scored 21 of his 30 points in the second half and Houston overcame a 16-point deficit to stun short-handed Phoenix.

Houston won after blowing a six-point lead in the final two minutes. Devin Booker and Cameron Payne made back-to-back 3-pointers to tie it at 121, but the Rockets pushed ahead by a point when Green made one of two free throws with 28.8 seconds remaining.

That set up a frantic final possession that included four missed shots by the Suns, including a 16-foot jumper by Booker at the buzzer.

It was one of the few blemishes for Booker, who led the Suns with 41 points on 15-of-25 shooting. The three-time All-Star is in the midst of one of the best scoring stretches of his career. He had 44 points at Sacramento on Monday night and 51 against Chicago at home Wednesday night.

Rookie center Walker Kessler scored a career-high 20 points on 7-of-7 shooting and had 11 rebounds for Utah. Jordan Clarkson had 19 points and Collin Sexton added 18 as the Jazz shot 55% from the field and matched a season high for points.

Myles Turner scored 18 points for Indiana. The Pacers lost for the third time in four games on their trip.

Denver star Nikola Jokic, the two-time defending NBA MVP, had just four points in the first half on 2-of-5 shooting, but finished with 24 points, 10 rebounds and eight assists.

The Hawks were riddled with injuries before the game with Young, their leading scorer, sidelined by soreness in his right shoulder and John Collins out at least two weeks and De’Andre Hunter out at least one week. In all, Atlanta had eight players listed on the injury report.

P.J. Washington had 21 points and Mason Plumlee added 17 points and 10 rebounds for the Hornets. They have won three of their last four.

Beal scored 33 points, but turned the ball over twice and missed an open jumper in the final minute with Washington trailing by one.

NEW YORK (AP) — Kyrie Irving scored 27 points and Brooklyn built a huge lead in beating Toronto for its fourth victory in a row.

Brooklyn led by 36 points midway through the second quarter and held a 93-72 advantage at the start of the fourth.

Kevin Durant had 17 points and Nic Claxton added 15 for the Nets.

Jonas Valanciunas added 21 points and 11 rebounds for New Orleans, which has won three straight and eight of 10 to remain atop the Southwest Division ahead of Memphis.

Popovich was at the AT&T Cente.r but missed the game due to a minor medical procedure. He will also miss a home game Sunday against Phoenix. Former Philadelphia coach Brett Brown coached the Spurs in Popovich’s absence.

The Grizzlies led by 18 early in the fourth, but the 76ers had another push left, cutting the Memphis lead to single digits with about five minutes left and to 111-106 with three minutes to go.

Mitchell poured in 16 points in the first nine minutes, outscoring Orlando himself by one, and the Cavaliers never relinquished control. Cleveland eventually led by 20 in winning for the 10th time in 11 home games this season.