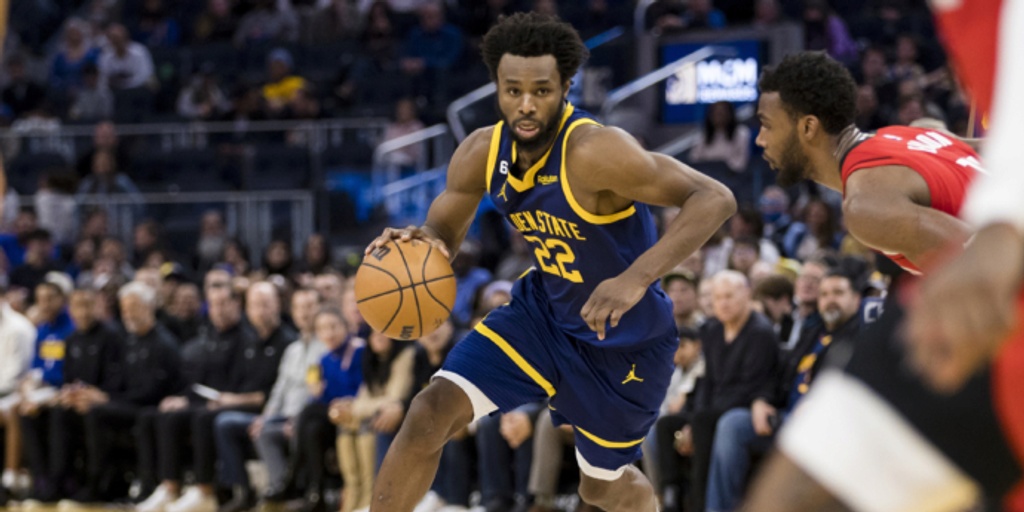 SAN FRANCISCO (AP) — Andrew Wiggins shoots more than 100 three-pointers most practices, as many reps as needed “until I feel good.”

The ball is smooth coming out of his hand, he's in position, the ball is going through the net.

On Saturday night, Wiggins almost made his career-best ninth three-pointer, but his foot was on the line.

He dazzled from beyond the arc, scoring a season-best 36 points and matching his career high with eight threes, leading the Golden State Warriors past the Houston Rockets 120-101 in the second game of back-to-backs for both teams.

“I felt like I was just flowing,” Wiggins said. “My shot felt good, my teammates did a great job finding me and getting me open shots and good looks.”

Stephen Curry scored 30 points with eight threes of his own to go with 10 assists. Jordan Poole started in place of a resting Klay Thompson and added 21 points and five assists, one night after a 30-point performance off the bench with a season-high seven threes.

Wiggins knocked down consecutive threes midway through the third quarter and shot 14-of-19 overall as the Warriors won their 10th straight at home.

Jalen Green added 13 points but missed all five of his tries from long range a night after the 20-year-old guard had 30 to help fuel a 16-point comeback in the second half of a stunning 122-121 win at Phoenix. The Rockets were sluggish from the start in this one.

Golden State became just the second team in NBA history to make 20 three-pointers in four of five games, according to the Elias Sports Bureau. The Jazz did so from Nov. 27-Dec. 8, 2021.

The Warriors raced to a 22-4 lead, making their initial seven shots, as Houston began 2 for 11. Golden State led 39-23 after one quarter.

“It was a phenomenal first 18 minutes, I thought that was maybe the best stretch we’ve had all year to start the game and then halfway through the second quarter, maybe eight minutes left in the second quarter we didn’t have any turnovers, we had like 16 assists, we were defending, rebounding, doing everything right and then we just lost our focus,” Warriors coach Steve Kerr said. “That’s our biggest challenge right now is trying to maintain our focus long enough to not give up leads and allow teams back in and I thought that’s what happened tonight.”

A DAY FOR KLAY

Thompson sat on the second game in consecutive nights, as has been standard practice for him to not play both contests — for now, that is. This marked the Warriors' fifth back-to-back of 15 total.

“The hope is that he will play back-to-backs later this year. Today, he will go through really good court work to try and simulate as best we can what a back-to-back would feel like for him,” Kerr said.

Warriors: Kevon Looney grabbed 12 rebounds. ... Curry, Poole and Wiggins combined for 10 threes in the first half. ... The Warriors committed no turnovers and only two fouls in their 39-point opening quarter. ... Golden State improved to 11-1 at home and the unbeaten run is the best for the team on its home floor since 11 in a row from Oct. 30-Dec. 3, 2021.