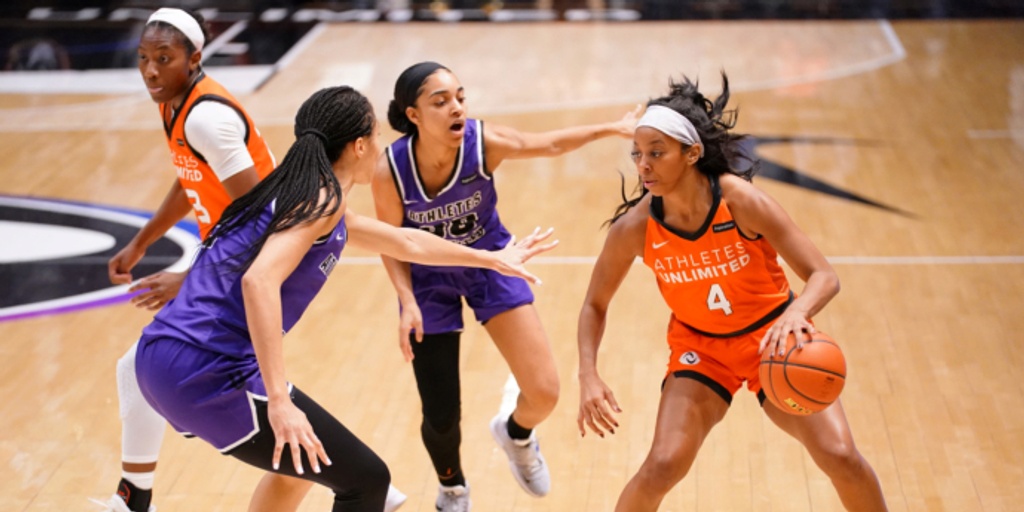 “We have been advisors for AU since the very beginning, and we're excited to be a part of this
capital raise. Athletes Unlimited is at the forefront of women's sports and an inspiration for how
sports leagues can thrive with an athlete-first business model," Durant said.

"Every pro sports league should take note of what AU is doing, especially the pathway for athletes to have a
financial stake in their own leagues," Kleiman added.

The league serves as a way to keep WNBA players stateside during the offseason and provide opportunities to grow their games, and gives free agents the ability to pitch themselves to other teams.

Los Angeles Sparks guard Lexie Brown, for example, performed well during AU's circuit last season — shooting a blistering 46.9% from three and nearly topping the leaderboard in steals (38). Brown carried that momentum into the regular season, doubling as one of the most prolific three-point shooters in The W last season — and an odd snub for the three-point contest — by canning 39.8% of her triples on roughly four attempts per contest and being an active defender.

Brown has spoken glowingly of the league, highlighting the power its given female athletes.

"Another sign of progress has been Athletes Unlimited, providing female athletes with a voice and a new model which affords us another opportunity to compete. Not just that, but it puts the power in our hands as we govern our own affairs on and off the court," Brown said. "Athletes Unlimited has played a major role in rejuvenating my WNBA career. AU gave me a platform and visibility to showcase the work I had been putting in. I was given opportunities and exposure that I have never gotten and possibly will never get in the WNBA. We need more examples like it."

"To have a league here, to establish another league here in the States, where women don’t have to go overseas and be away from their families, where they don’t have to put their bodies through year round-play. Just five weeks playing competitive basketball," Cloud said. "It means everything for me to be an intricate part of bringing this here, because it’s a progression of women in sports. When we talk about investing in women, believing in women, valuing women and what they bring, AU is a prime example of that."