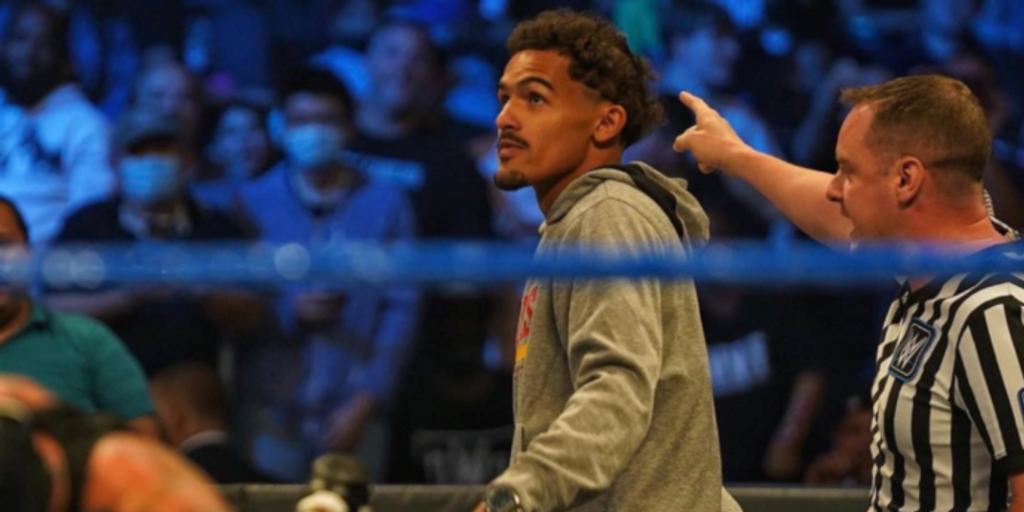 Trae Young back at MSG — this time playing a wrestling heel

Trae Young was back at Madison Square Garden.

Once again, he played the heel.

Atlanta’s star guard made a surprise appearance at “WWE Friday Night SmackDown,” returning to the arena where he led the Hawks to an NBA playoff victory over the New York Knicks.

Wearing a gray Hawks hoodie, Young was the perfect wrestling villain after getting under the skin of Knicks fans with his stellar performance in a sport that’s not scripted.

Young was introduced to the crowd of more than 14,000 by wrestler Sami Zayn, who said he “arranged for a very special guest to be in our corner tonight, someone who actually knows what it takes to win at Madison Square Garden.”

Trae Young pulled up to WWE Smackdown at the Garden 💀pic.twitter.com/aCRJL5ZKhD

Young hit a game-winning shot against the Knicks in Game 1 of the playoffs, sparking the Hawks to a five-game upset victory. He seemed to thrive on the raucous boos of the New York faithful, which culminated in an ugly incident where a fan spit on Young.

Which, of course, provided the perfect setup for Young to play a bad-guy role in wrestling.

He soaked up his boos on the way to the ring and clearly seemed to the relish the setting, though a rough encounter with a referee ended his night.

From outside the ring, Young grabbed fan favorite Rey Mysterio as he was hanging over the ropes in an apparent choke hold, prompting the ref to eject Young from the match.

“The ref said, ‘Hey, Trae, you’re not that special, pal,’” crowed WWE commentator Pat McAfee, a former NFL punter. “That’s what Trae’s gonna do. Trae wins at all costs. You can’t do that around here. You have rules.”

In the Eastern Conference final, Young sustained an ankle injury when he inadvertently stepped on an officials’ foot. That forced him to miss two games in a series the Hawks lost to the eventual NBA champion Milwaukee Bucks.

It was the same ending in the ring.

After Young was tossed, the team he was supporting wound up losing their match when Zayn was pinned by Big E.

“It was fun,” Young said in a tongue-in-cheek interview with WWE. “It definitely felt like maybe the fans are still upset with what happened in the playoffs. But maybe when we can go back to Atlanta January 1 it will be a lot different, the reaction, for sure.”