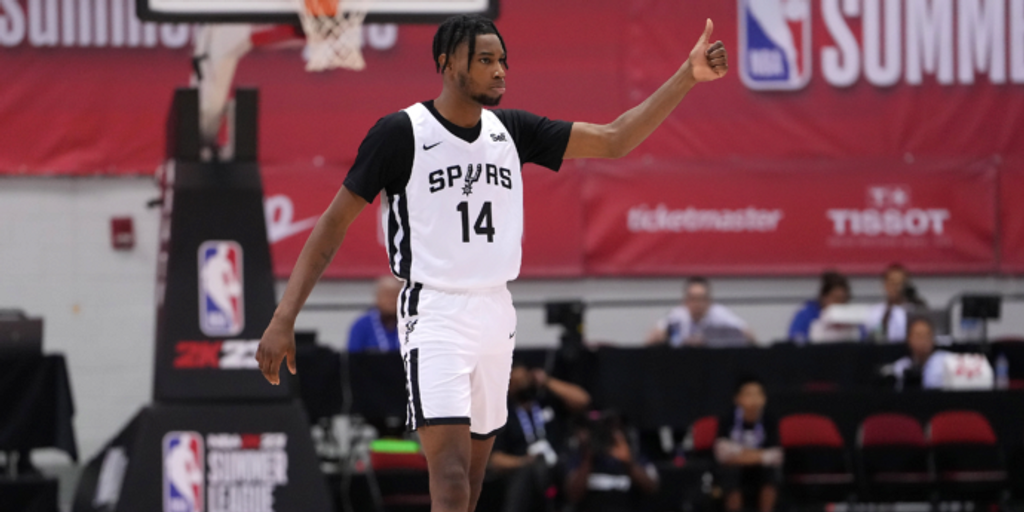 We had healthy double-doubles, game-winners and undrafted surprises throughout the day. So why waste time harping on those who struggled when we can highlight those who excelled?

Instead of the usual "Studs and Duds," I'm going all-in with 10 studs for today's recap.

Take a look at the wide variety of impact players from another great day of hoops:

Davison hasn't played poorly by any stretch, showing great passing instincts and active, if a bit reckless, defense. But he was missing a breakout scoring performance, and it all came together beautifully against Memphis. He drilled four triples, including some off the dribble, which is an exciting sign considering Davison has struggled from deep throughout most of his hoops career.

He also attacked when he wanted to and displayed impressive chemistry on lobs with Bostons' bigs. The energy Davison brings to the court is electric, and so when he's on his game, he truly dazzles the audience.

Wesley has admittedly been snubbed from a few of these daily roundups. He gets his moment here with another great performance as a lead playmaker. Wesley dished out skip passes, transition dump-offs and connecting feeds, as he's done all summer for San Antonio. He also showed improved efficiency as a self-creator after some rougher shooting splits. If you're picking a value 2022 Draft pick off of Summer League alone -- which I strongly advise not to do, but anyway -- Wesley might be the one.

Fantastic sequence on both ends from Dalen Terry.

As long as he continues to cut and plays the defense we know he's capable of, he'll have an important role. pic.twitter.com/yJuNisfI4F

Like with Wesley, I've been close to sticking Terry on the "Studs" list multiple times, and he finally breaks through here. Terry hit both spot-up attempts from distance and capitalized on some timely cuts. His passing didn't shine in this game, but Terry has shown fun court vision throughout Summer League.

Terry continues to be at his best on defense with his length, and also used that length to finish off a tough bucket through contact. His defensive acumen and passing give him a stable floor, and these scoring moments hint at the upside for the first-round rookie.

Deuce drives baseline and finds Feron Hunt cutting down the lane then jumps the hand-off and finishes on the other end.

Fantastic sequence from Deuce McBride and the Knicks start another Summer League game on a run. pic.twitter.com/DYxsbo1lQb

McBride is already an exemplary pull-up and perimeter shooter. We saw this on display against the Magic, but we also got to see him play a bit more aggressively as a driver. McBride took two attempts to the basket, hit two floaters, and had a nice jump stop turn into a fadeaway score. He still doesn't get all the way to the hoop quite as much as you'd like. However, he's improving his confidence attacking, in addition to the rest of his positive moments on both ends.

As a 24-year-old, undrafted graduate student from St. Mary's, Kuhse carried little expectation into Las Vegas, but he broke out with Thursday's performance. He was methodical with his offensive possessions, taking advantage of space and driving lanes the defense gave him. Kuhse relocated for open threes, probed for mid-range pull-ups and attacked for layups. He also frequently found himself in the right place at the right time for steals.

Moses Wright is everywhere today for the Mavs.

Hits the trailing C&S 3 and then in the next possession dunks home the put-back! pic.twitter.com/MFhjxiuAwf

Wright overpowered the Bucks, who could not match his physicality in the frontcourt. He did damage rolling to the basket on hand-offs and screens against a Milwaukee defense that was consistently late getting over to help. Wright also knocked down a three-pointer as a trailer and battled on the boards. The 6-foot-9 big man played 14 combined minutes with the Clippers and Mavericks last season and mostly suited up for the Agua Caliente (now Ontario) Clippers in the G League. Dallas should want to hang onto Wright as a physical presence.

Lindell Wigginton & Sandro Mamukelashvili combined for 44 points while both shooting better than 50% from the field in the @Bucks win!@Lwigginton5: 25 PTS, 4 AST, 3 STL@Mamukelashvili5: 19 PTS, 6 REB, 2 STL pic.twitter.com/Xb6R8iMB2e

Wigginton has been rock-solid all week, and this was another stellar performance for a player who deserves a long-term home. His smooth scoring and creative passing have been present in several games. Wigginton also jumped passing lanes to create steals and displayed some quality defensive activity. He appeared in 19 games for the Bucks last season, and hopefully Milwaukee recognizes how valuable the second-year player can be to their guard depth.

Tyson Etienne For the Win! pic.twitter.com/B4mXrUpwOU

Etienne's got some serious range. The 22-year-old canned several triples from well beyond the arc with confidence. But his biggest moment came at the rim, when Etienne exploded on a drive to the basket and finished an off-balance layup to win the game 87-86 against the Spurs. A 6-foot-2 guard who went undrafted this June, Etienne brings a fun mix of speed and shooting, and I'd imagine the Hawks want to keep him around in some capacity.

Johnson still has peaks and valleys as a creator, but man, are the flashing exciting. His confidence is rising as a pull-up shooting, and Johnson knocked down some threes when defenses played him conservatively. He remains an electric player in the open court and a constant threat to attack and throw down a massive dunk. Consistency is everything with the 2021 first-round pick at this stage, but it's great to see meaningful progression in his scoring development.

Sharpe was an absolute monster in Brooklyn's dominant win to close the night. His four blocks included one impressive play where he stuck to Minnesota's Josh Minott on a drive and stuffed a long-reaching layup attempt. The center held his own on multiple switches and was more mobile than I expected him to be.

Sharpe's passing is one of his hallmark skills, and he showcased it on one eyebrow-raising whip pass out of the post to David Duke Jr. in the opposite corner. He flashed some savvy as a low-post scorer and even knocked down a corner three. Cam Johnson has rightfully gotten much of the Summer League attention out of Brooklyn, but Sharpe's game was one of the best by a Nets player this week.