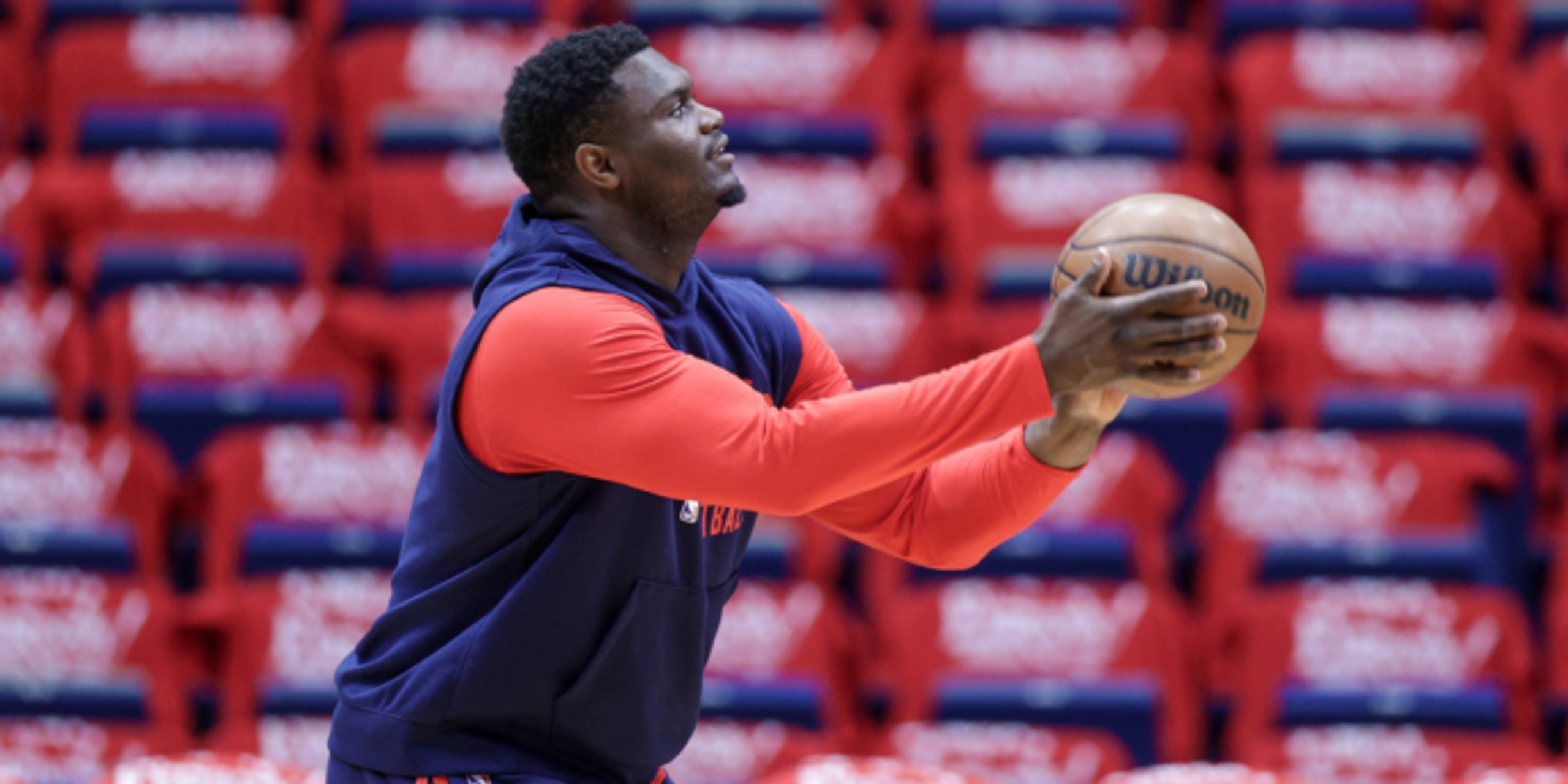 Should the Pelicans sign Zion Williamson to a max contract?

The New Orleans Pelicans are a team on the rise.

Despite stumbling out of the gates this season (losing 12 of their first 14 games), the Pels were able to right the ship and advance to the postseason. Over the second half of the 2021-22 campaign, New Orleans finished in the top 10 in both Offensive and Defensive Efficiency. Their Net Rating of plus-4.7 in the 23 games played after the All-Star break was tied with the Miami Heat for the sixth-best mark in the NBA.

After beating both the San Antonio Spurs and Los Angeles Clippers in the Play-In Tournament, the Pelicans gave the Phoenix Suns a battle in the first round of the playoffs before bowing out in six games.

The addition of CJ McCollum at the trade deadline paid immediate dividends for New Orleans, as he averaged over 24 points per game to go along with 5.8 assists, 4.5 rebounds and 2.7 made three-pointers after coming over from Portland. McCollum also quickly established himself as a team leader on and off the floor. Jonas Valanciunas is another respected veteran still producing at a very high level as well.

The rest of the roster is teeming with promising young players. Brandon Ingram, who is still just 24 years old, was a beast in the postseason, averaging 27.2 points, 6.2 rebounds and 6.2 assists while shooting over 40% from downtown in the series vs. Phoenix. The team's three rookies — Herbert Jones, Trey Murphy III and Jose Alvarado — were all significant contributors too.

Jones exceeded even the loftiest of expectations, immediately establishing himself as an elite defender. The 35th overall pick in the 2021 NBA Draft, he led all rookies in total steals with 130 (50 more than Scottie Barnes, who ranked second) and was third in blocks. According to Basketball-Reference, he is the only rookie in New Orleans franchise history and just the seventh first-year pro in league history to tally more than 125 steals and 50 blocks. Jones' terrific all-around play earned him a spot on the NBA's All-Rookie Second Team.

Jaxson Hayes, who just celebrated his 22nd birthday last month, is coming off the best year of his young career. Despite an up-and-down season with different roles, Devonte' Graham still averaged double-figures.

And, remarkably, 14 of the 15 players on the Pels roster to end the season are under contract for at least one more season. The only free agent on the team is Tony Snell, who didn't log a single minute for New Orleans in the playoffs.

So, it'll be a stress-free summer for the Pelicans front office, as they don't have any significant decisions to make this offseason, right?

On the contrary, the Pels have to make one of the most important determinations in the history of the franchise. As of next month, Zion Williamson will be eligible to sign a five-year, $181 million max rookie extension, which could increase by an additional $36 million, all the way up to $217.5 million, if he were to be named to an All-NBA team next season.

Let's start by recognizing that, dating back to high school, Williamson has been utterly dominant on both ends of the floor whenever he's been healthy enough to step foot on a basketball court.

During his lone season at Duke, Williamson was the consensus National Player of the Year. He tied for the ACC lead in scoring with 22.6 points per game, was third in rebounding (8.9 rebounds), second in steals (2.1) and fifth in blocks (1.8) on average. He also shot 68.0% from the floor, which led the ACC and was second nationally. Zion is the only NCAA player ever to average over 20 points a night and tally at least 70 steals and 50 blocks in the same season.

As a rookie in New Orleans, Williamson averaged 22.5 points and 6.3 rebounds per game, and gave glimpses of the enormous potential he possesses thanks to his almost unimaginable combination of size, strength and athleticism.

In 2020-21, his age-20 season, Zion averaged a whopping 27.0 points (including over 20 points per game in the paint — the most since Shaquille O'Neal in 1999-00), 7.2 rebounds and 3.7 assists, while shooting over 61% from the floor. In the process, he became the first player in NBA history to average at least 27 points on 60-plus% shooting for an entire season. Williamson tallied ​​20 or more points in 25 straight games, which is the longest streak in NBA history for a player under 21 years old.

He was named to the 2021 NBA All-Star Game, becoming the 10th player in league history to earn All-Star recognition before celebrating his 21st birthday and becoming the fourth-youngest player in NBA history behind only Kobe Bryant, LeBron James and Magic Johnson.

Through his first 60 career games, Williamson scored 1,457 points, trailing only Michael Jordan (1,664) for the most in the last 40 seasons.

Zion Williamson will go off next season!

So, given this nearly unprecedented production, signing him to a max contract in order to lock him up immediately is a no-brainer for New Orleans, right?

While Zion has been unguardable when he's on the floor, his inability to stay on the court has been a recurring concern.

Since being drafted No. 1 overall in 2019, Williamson has appeared in just 85 out of a possible 226 games. He missed the first 44 contests of his rookie season after tearing his meniscus, dealt with a thumb sprain, a fractured left ring finger and right knee soreness as a sophomore and sat out the entire 2021-22 season following surgery to repair a broken foot.

Over the last 30 years, the only top pick to play fewer games over his first three years in the league is former Portland Trail Blazer big man Greg Oden.

In addition to the injury issues, there have been reports about Williamson's unhappiness in New Orleans. Yet, when he was asked back in April if he would agree to sign a max offer from the Pels, Zion responded: "Of course, I couldn't sign it fast enough."

However, Pelicans executive vice president David Griffin acknowledged that contract-extension talks with Williamson would be difficult.

"Obviously, that conversation is going to be one that will be a challenge," Griffin said early last month. "When it's time to have that, we'll have it. And right now what we're focused on is him being healthy, and (being in) kind of elite condition to play basketball, and we'll start there."

Williamson has one year left on his rookie-scale deal, which will pay him $13.5 million in 2022-23. If Zion and the Pels don't agree on an extension this offseason, he will be a restricted free agent next summer. In that scenario, both sides would be carrying considerable risk. Williamson would be gambling on not having his future earning power crippled by a career-altering injury, while, at the same time, the Pels would risk potentially losing a franchise-altering talent via free agency.

Meeting in the middle probably makes the most sense for both parties. When discussing the parameters of a compromise, the agreement between the Philadelphia 76ers and Joel Embiid back in 2017 provides a blueprint.

After sitting out the entirety of his first two NBA seasons due to a devastating foot injury, Embiid suited up for only 31 games in his third year. Although Embiid looked fantastic when he was finally cleared to play, the Sixers were understandably hesitant to commit massive sums of guaranteed money to the injury-prone big man.

Thus, that offseason, Philadelphia and Embiid agreed to a five-year, $148 million extension, but the deal included offset language that protected the team if the player could not stay healthy. If Embiid missed 25 or more games or played fewer than 1,650 minutes in any of the final four seasons of the extension, Philadelphia had the right to waive him and get out of paying the remaining years of his contract.

As it turned out, Embiid avoided the injury bug and established himself as one of the league's premier players, finishing second in MVP voting in each of the past two seasons. Last summer, he inked a four-year, $196 million supermax pact that will keep him with the 76ers through the 2026-27 season. His entire salary is fully guaranteed.

From what I have been told, the Pelicans, at this point, are not willing to offer a full five-year guaranteed deal. A lot of it is flowing down from ownership. Gayle Benson, the owner, is also the owner of the New Orleans Saints. And I have been told they're going to take a football-style, Saints-style mentality with this contract negotiation. They will offer him a huge contract, but will not guarantee all of it.

It's possible such an approach by the Pels could offend Zion and lead to a standoff between the two parties. But the alternative (signing a max deal with no protections) seems like a non-starter for New Orleans ownership. So, even if the Pels front office were willing to gamble with the team's cap space, Benson likely wouldn't be willing to roll the dice.

Again, a compromise appears to be the most reasonable and plausible outcome. In this scenario, Zion would still bank north of $90 million if he was unable to stay healthy.

It's difficult to imagine a player who hasn't set foot on an NBA court during an actual game in over 13 months turning down that type of payday.