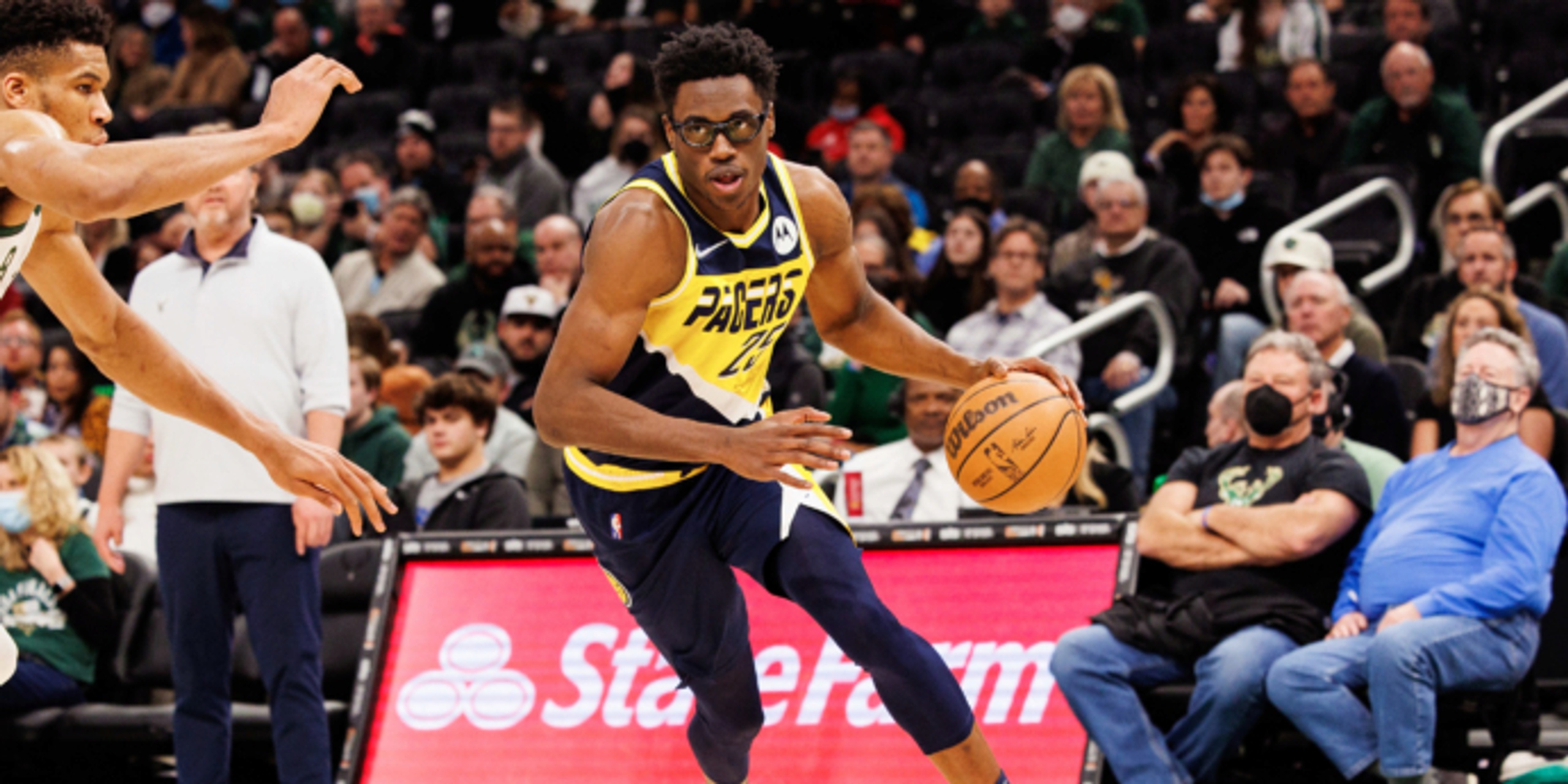 Pacers thrilled to re-sign Jalen Smith: 'He was priority No. 1'

In 2020, Smith was drafted No. 10 overall by the Phoenix Suns, who had just acquired future Hall-of-Fame point guard Chris Paul days earlier. With Phoenix focused on contending, Smith’s development was placed on the back-burner.

Smith experienced immediate team success, witnessing an NBA Finals run as a rookie. However, his involvement was limited, as he played a total of 17 minutes during that postseason. Eventually, the Suns made the stunning decision to decline Smith's third-year team option, even though he hadn't been given many chances to showcase his skill set and prove he belonged in the league.

It was clear that the 22-year-old wasn't part of the Suns' long-term plan, so it was no surprise when Phoenix dealt him to the Indiana Pacers for veteran wing Torrey Craig in February. Phoenix even attached their 2022 second-round pick to Smith’s expiring contract in the deal.

The Pacers' front office and coaching staff made it a priority to ensure that Smith felt welcomed, and he felt an instant connection to the organization upon his arrival. The change of scenery was the best thing that could've happened to Smith, who made the most of his increased playing time.

After the trade, Smith averaged 13.4 points, 7.6 rebounds, 1.4 threes, 1.0 block and 0.4 steals in 24.7 minutes. He scored in double figures in 18 of his 22 games with the Pacers, playing the best basketball of his career right before hitting free agency.

The Pacers re-signed Smith on a two-year, $9.7 million deal this week. A league source confirmed to Basketball News that Smith’s new deal doesn’t include a player option after next season, meaning the Pacers will get to keep the lottery talent for multiple seasons.

On Wednesday, the Pacers hosted a re-introductory press conference for Smith and he officially signed his new contract. Even though Smith received significant offers from other teams, he didn't want to pass up the opportunity for long-term growth in Indiana.

At the start of the press conference, Pacers head coach Rick Carlisle announced that Smith will be Indiana’s starting power forward moving forward. While he has limited experience as an NBA starter (with just 17 starts under his belt), Smith has consistently flashed when given heavy minutes. In eight starts last season, Smith averaged 14.6 points, 7.8 rebounds and 1.0 block in just 24.3 minutes — while shooting a remarkably efficient 45.5% from three-point range.

Even though Smith was seen as a “reach” on draft night when he was selected at No. 10 overall, there’s no denying his two-way talent. With his ability to space the floor and provide flashes of above-average defense at the rim, he's a perfect fit for the modern NBA and the Pacers are thrilled to watch him develop alongside their young core.

“I’m having a hard time not being giddy because today is a fantastic day for the organization...” Pacers president of basketball operations Kevin Pritchard said. "When we made the trade not too long ago, we were super excited. We just didn’t know how good this guy was. The sky is the limit, so [we're] super excited.”

Indiana’s new timeline is centered around point guard Tyrese Haliburton, who was acquired from the Sacramento Kings around the same time that Smith joined the team. Right away, it was clear that Haliburton and Smith had on-court synergy, which led to some fun moments between the inside-out duo. Carlisle noted that Haliburton’s presence makes a world of difference for players like Smith.

“I think it’s important to point out that having Tyrese Haliburton here is another reason he played so well down the stretch of the season,” Carlisle said. “And having Haliburton, [T.J.] McConnell and now [Andrew] Nembhard, we have three really tremendous facilitating, pass-first point guards that I think probably weighed a little bit into Jalen’s long-term thinking. He’s going to be playing with some guys that can get him the ball in the right places offensively. Again, the trade for Tyrese, this is another trickle down of that.”

As the Pacers embark on their first major rebuild in over 30 years, their front office has assembled an intriguing young core that features Haliburton, Smith, Bennedict Mathurin, Isaiah Jackson, Chris Duarte, Kendall Brown and Oshae Brissett among others. Entering his third NBA season (and his first as a full-time starter), Smith has an opportunity to solidify himself as a building block in Indiana.

“It’s not going to change my work ethic,” Smith said. “My work has always been hard, it’s just how I’ve been raised. My father, my mom always told me if I’m going to do something, do it to the fullest. Obviously coming into a starting role is a huge responsibility, a lot more responsibility, but I’ve been taught responsibility my whole life.”

Indiana stumbled into a gem with Smith, and they found a way to keep the big man around for multiple years. This deal seems like a perfect fit for both sides given where they're at, with Smith checking all of the boxes for the Pacers and vice versa.

“The second the draft was over, Coach and I and Chad Buchanan, the management staff and the coaches, were like, ‘How do we keep Jalen in a Pacer uniform?’ It became this team effort. We just knew that he was priority No. 1,” Pritchard said. “This was somebody we wanted badly. As you build a team, you want to get players in the right position. You went them sorta on the same timeline and you just want to let them grow. We’re in this great position now. It’s about growth and development. He is right at that curve, and I think his game will really take a notch up, and I think he’s got as much growth as anybody. So, we’re excited and thankful more than anything.”

All of a sudden, the pieces are falling into place for the Pacers. After stagnating and getting eliminated in the first round year after year, a rebuild was long overdue. Now, the Pacers currently have 13 players who are age-25 or under, all of whom are on the same timeline moving forward.

This season, Smith will have an opportunity to establish himself as a long-term fixture for the Pacers and develop alongside the rest of the team's promising core. All Smith needed was an opportunity, and he happened to land in the ideal situation for his career trajectory.