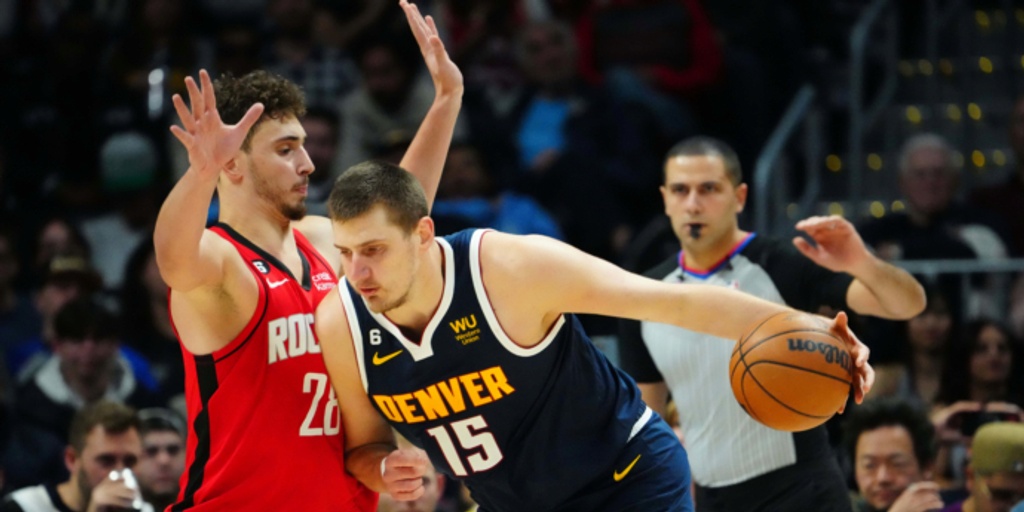 Prior to Monday night’s game between the Houston Rockets and Denver Nuggets, 20-year-old center Alperen Şengün expressed his excitement about playing against two-time NBA MVP Nikola Jokić – whom he has looked up to for years.

“It makes me happy when they compare me to him because he is my idol,” Şengün told reporters before the game.

Şengün admitted to being a bit starstruck, saying after the game: “I forget everything when I get on the court [with Jokić].” This was just the second time that the centers have faced off, and it marked the first time that Sengün started and played a lot of minutes against his idol. (In last November's showdown, Şengün came off of Houston's bench and played just 14 minutes).

"I was excited to play against him. I played well, he played well,” Şengün added. “It was a good game for us, we have to look forward to the next game… I'm learning. He's a good post-up player, and I'm learning how I can guard when they play the post-up."

Like Jokić, Şengün is a skilled passer who’s capable of having an offense run through him. In fact, Jokić believes that Houston needs to run things through their center more often.

"I think he’s really talented,” Jokić said of Şengün after the game. “Maybe this is going to sound weird, but I think they need to play a little bit more through him. Sometimes they look a little bit more stagnant with all their threes. The guy has the talent. He can pass the ball, he can post up, he has the touch around the rim. You can see some different moves that he’s made."

Şengün has had some really impressive performances this season. He filled the stat sheet in a win over the Oklahoma City Thunder three nights ago, finishing with 21 points, 19 rebounds, 7 assists, 3 steals and 2 blocks on 58.8% shooting from the field.

Kevin Porter Jr. recently raved about his Rockets teammate, referring to Şengün as “Baby Joker” and talking about how talented he is.

"I loved it,” Porter Jr. said of watching Şengün face Jokić. “That's his idol. That's someone that he matched his game after. It's good going against people like that, especially for AL-P. It's the MVP at the end of the day. Definitely a good matchup for him."

Şengün and Jokić won't have to wait very long to face off again; Denver and Houston face each other again on Wednesday at 9 p.m. ET.