March Madness: Sweet 16 recap, looking ahead to the Elite Eight

The Elite Eight is set! After two more days of madness, nail-biters, and upsets, eight programs will meet this weekend to earn trips to the Final Four. Here's the breakdown of Thursday and Friday's results:

Saint Peter’s def. Purdue 67-64, will face North Carolina
Happy National Peacock Day! Shaheen Holloway and the Saint Peter's Peacocks have stunned another powerhouse, defeating the No. 3 seed Purdue Boilermakers 67-64 to advance to the Elite Eight. They have now beaten Kentucky, Murray State and Purdue en route to becoming the very first No. 15 seed to make the Elite Eight in NCAA Tournament history. Daryl Banks III led them in scoring with 14 points, while Doug Edert provided 10 huge ones off the bench.

Arkansas def. Gonzaga 74-68, will face Duke
In a fast-paced game for most of the night, JD Notae, Jaylin Williams and Trey Wade knocked off the No. 1 overall seed. Williams said after the game, "We've been disrespected the whole year, so it's just another thing for us.” Notae led the way with 21 points on 9 of 29 shooting from the floor, while Drew Timme posted 25 points in (potentially) his final game for the Zags. This one had the internet buzzing - what a win for Eric Musselman and co. 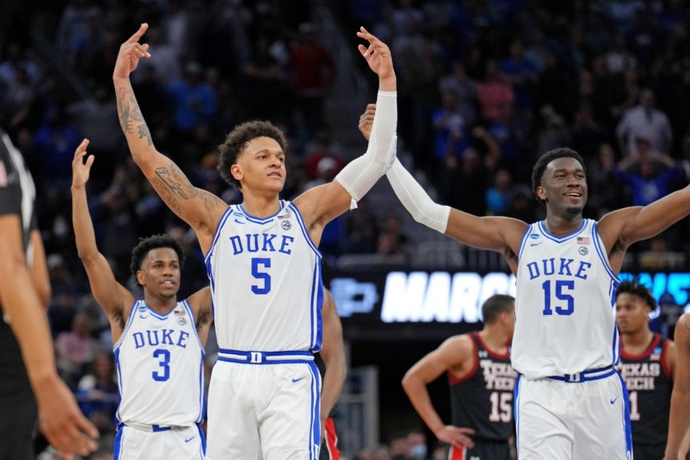 Duke def. Texas Tech 78-73, will face Arkansas
This game was a heavyweight fight from start to finish. Texas Tech held a four-point lead at the half, but Paolo Banchero took over down the stretch, finishing with 22 points in the win. Jeremy Roach also played a huge role in this one with 15 points and 5 assists. Coach K and his Blue Devils survive and advance to a meeting with Arkansas. Must-see television ahead.

Houston def. Arizona 72-60, will face Villanova
Kelvin Sampson is having, arguably, the best coaching season in America. He and the Cougars led wire-to-wire in this one to defeat the Wildcats, whom many had as their championship pick. Jamal Shead led the way with 21 points while Kyler Edwards posted 19. Another ‘Culture Win’ for the Cougars as they will meet Collin Gillespie and Villanova in the Elite Eight. 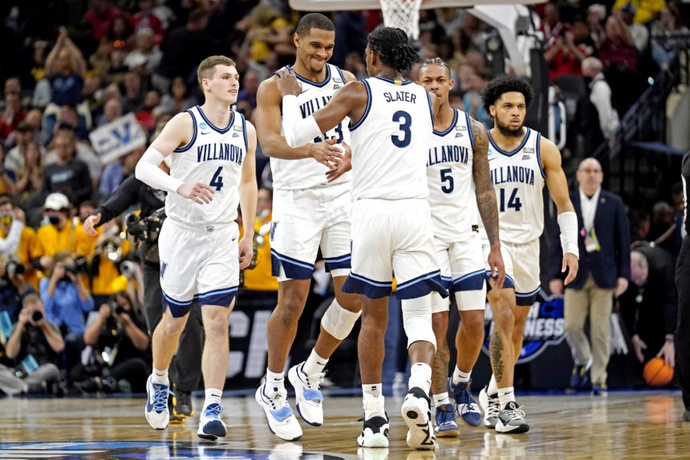 Villanova def. Michigan 63-55, will face Houston
The Wildcats took the lead with 3:42 to go in the first half and never looked back. They remained in control the rest of the way behind 22 points from Jermaine Samuels and 15 from Justin Moore. This ends the Wolverines' run, which has been nothing short of impressive. Villanova will now meet Houston in the Elite Eight in a matchup of two of the most disciplined, well-coached teams in the country.

Kansas def. Providence 66-61, will face Miami (FL)
The Jayhawks advance to their first Elite Eight since 2017 behind Remy Martin’s 23 points, a season-high for him. They only got 19 combined points from Ochai Agbaji, Christian Braun and David McCormack, but were able to hold on down the stretch. The Jayhawks are the only No. 1 seed remaining in the NCAA Tournament, and they are currently the betting favorites to win it all. 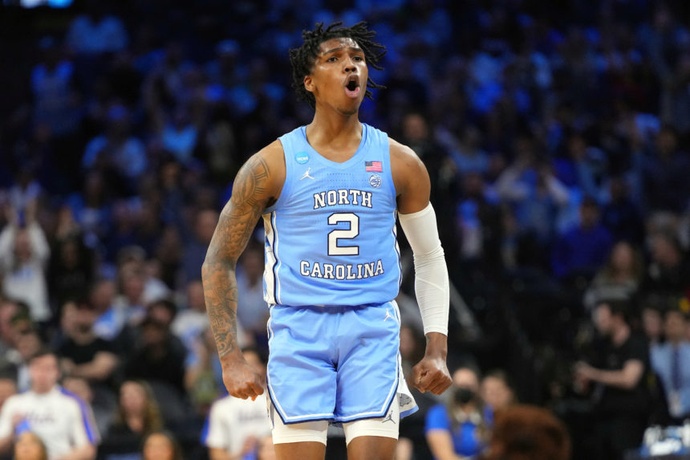 North Carolina def. UCLA 73-66, will face Saint Peter’s
UCLA led 64-61 with 2:08 to play, but Caleb Love had other plans. He would catch fire from deep and hit two huge shots with just under a minute to play, giving his team the 67-64 lead. Armando Bacot would add a putback with 0:15 to play to make it a five-point game. That would be enough to hold off the Bruins. Love led the way with 30 points in an incredible performance, propelling the Tar Heels into a meeting with Cinderella, the Peacocks from Saint Peter’s.

Miami (FL) def. Iowa State 70-56, will face Kansas
The Hurricanes have advanced to the first Elite Eight in their program's history. Senior guard Kameron McGusty led all players with 27 points in this one, something he’s accustomed to. A Sam Waardenburg three and Jordan Miller alley-oop extended Miami's the lead to 13 points with under 2:00 to play, which sealed the deal. Jim Larranaga and co. will play the final No. 1 seed in the field, Kansas, for a spot in the Final Four.