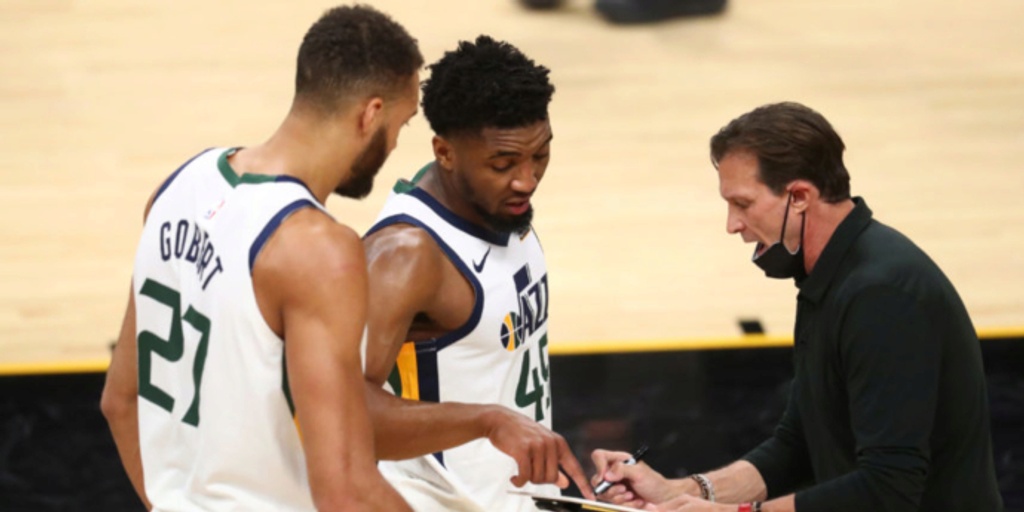 A little over six weeks ago, the Utah Jazz were humming at full speed with no bumps in the road with a 28-10 record. Then, a dip happened, and they seemingly went off of radars everywhere for a little bit. Thanks to countless injuries, which included Donovan Mitchell and Rudy Gobert both missing multiple games, Utah had a 2-11 stretch.

Utah was right there alongside the Phoenix Suns and Golden State Warriors atop the Western Conference standings before that pile of losses, but they may have reset the calculus for the team.

In February, the Jazz are 8-1, with their lone loss being a road defeat at the hands of LeBron James’ Los Angeles Lakers. Impressive wins over the Denver Nuggets, Dallas Mavericks, Warriors and Suns all stand out, as the Jazz have finally turned it back on recently.

If not for the bad luck in January with injuries, the national conversation around Utah would feel very different right now.

“I think the biggest thing for us is that it feels different, it looks different,” Mitchell said after Utah’s 118-114 win over the Suns. "Like I’m excited because you walk off the floor and you feel gassed, like everything was just let out by everybody. Everybody on our bench was a plus in the plus/minus, like contributed something well and did something positive and found ways to win every way possible.

"Like it just feels different. I don’t have a word for it, but just finding effort and competing, that’s the biggest thing, whether it was one shot or two stops to knowing a play through the nine, someone hustling back on defense, we dealt with the ball three different times in one possession, like that’s what its going to take, to get a win like tonight. It’s pretty solid and I think we can continue to build on that as well.”

Donovan Mitchell is on a HEATER late in the fourth! 🔥

Mitchell is not the only one in Salt Lake City breathing a huge sigh of relief with the Jazz’s latest turnaround effort.

Before losing 11 of those 13 games last month, Utah ranked top five in both offensive (117.0 ORTG) and defensive efficiency (107.2 DRTG). Outscoring teams by 9.8 points per 100 possessions, the Jazz were a well-oiled machine at one point that made it so hard for any opponent to crack their code. With Mitchell’s scoring barrages alongside Gobert’s special rim protection on the other end, Utah already is one of the Association’s toughest outs on a nightly basis.

Recently, those marks have bounced back up to best in the NBA levels. Once that maintains, Utah is well on its way to securing home-court advantage for the first round of the playoffs. In the meantime, it’s all about taking care of business prior to the postseason, where the Jazz can finally prove of being more than a regular-season juggernaut at times.

“I think in some ways, its affirming, you know its not discounting that [Chris Paul] didn’t play, but regardless the way that we played, the way we played the other night, that’s the important thing,” Jazz head coach Quin Snyder said of the team bouncing back strong. “The fact that you won, reinforces that, which I think is important.

"To come off, like I said, I mentioned this in earlier of the year, even though you have a roster that looks very similar, that doesn’t necessarily mean your team is going to be successful playing the same way and some of the adjustments and some of the injuries, it’s taken us a while to evolve and sculpt a different identity with different players and to have games like this, tough games, close games against teams that are really good and really disciplined and play defense, something that can help us and I thought our execution down the stretch in particular was solid.”

With the Jazz recapturing their momentum, there’s a quick way to glance the advanced metrics to confirm this turnaround is legitimate. The early-season Jazz are back and better than ever as of late:

This is no surprise, but the impact Gobert has on the Jazz’s defense and overall system is incredible. Gobert’s game-changing defense in drop coverage helps deter drives to the rim, making it a tough task trying to weave around his lanky 7-foot frame along the way. As you can see above, Gobert’s absence was felt in a huge manner while he sat out last month. Now, with him and Mitchell back, plus the Jazz improving their overall depth during this past offseason, this team feels ready to roll for a deep postseason push.

“I think more than the wins, just on Wednesday, the way we compete defensively and the way we played together offensively, is one thing we can take away and we know that when we play that way, we’re going to be in a good shape every night,” Gobert said. “The goal is to keep getting better and better.”

If this keeps up, not only will the Jazz get better and better, but they will have a compelling argument to play spoiler atop the Western Conference hierarchy in a few months.