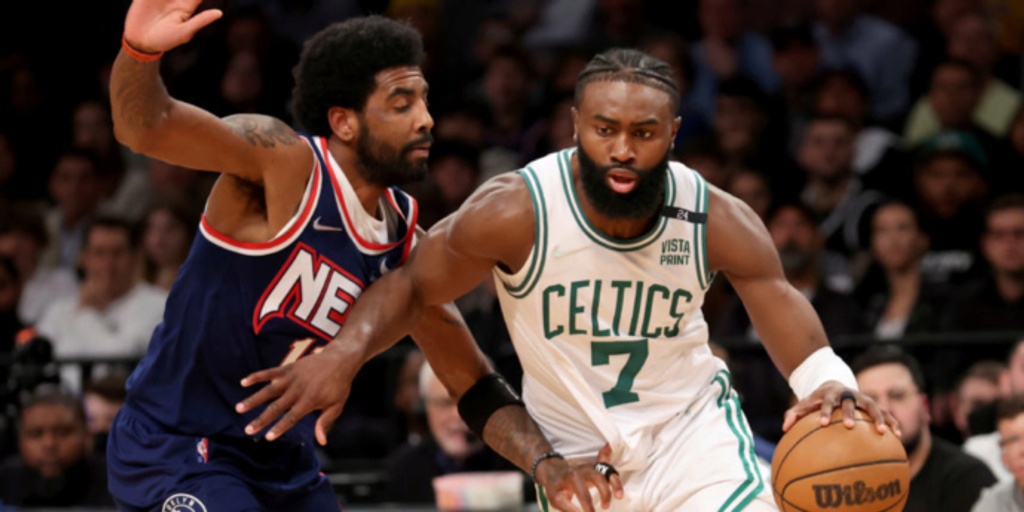 Jaylen Brown feasted on his matchup advantage against the Nets

It's the fourth quarter of Game 3 between the Boston Celtics and Brooklyn Nets last Saturday. Boston carries a slim 81-76 advantage with 9:30 left in the contest. Jayson Tatum has drawn the Nets' attention, and though he would ultimately finish with 39 points, had made just 8 of 21 shot attempts through the first three frames.

Jaylen Brown decides to take over.

In quick succession, Brown attacks Goran Dragic in transition, then cooks Blake Griffin with a step-back three and a downhill drive. Just over a minute later, he powers through Patty Mills before stopping on a dime for a pull-up two-pointer. Brown is radiating assurance in these two minutes, as he did throughout most of the series.

The 25-year-old posted four nearly identical box-score lines in four straight games, averaging 22.5 points, 4.3 assists and 5.3 rebounds per game. Those are great base numbers alone, and Brown has come alive in the Celtics' late-game surges. He's tied for the third-most points per game (8.5) in the fourth quarter among postseason players with at least four games played.

Entering the series, Brown's offensive matchup was a key battle to watch. Nekias Duncan and Steve Jones Jr. touched on it in their Dunker Spot preview. With top defenders Bruce Brown and Kevin Durant typically focused on Tatum, the Nets would be at a severe on-paper disadvantage placing just about anyone on Brown in man-to-man coverage and on straight switches. That translated to the court.

First, it's about the bag. Brown's handle has so vastly improved from his early years in the league that fans can watch video-game-like combos and expect the young star to pull them off. Brown shakes the smaller Seth Curry with a spin move, plants his weight on his left foot and rocks back for what becomes an open jumper. Simply filthy. Then, you add in immovable upper-body strength and balance, and get an elite downhill scorer.

Jaylen Brown sparked the final takeover run for the Celtics last night because he just couldn't be stopped attacking the basket. The contortion and balance on some of these... whew pic.twitter.com/AgXUHTbhzJ

Brown made 13 of his 20 field goal attempts on drives to the basket in the series. That 65.0% clip is tied for sixth among players who have tried at least 10 such shots this postseason. That's a small sample, but it's reinforced by his 51.3% rate in the regular season, which was good for 20th among 83 players who attempted at least 3 driving shots per game.

So far these playoffs, Brown has taken a whopping 38% of his playoff attempts within 4 feet of the hoop, in the 94th percentile among wings, per Cleaning the Glass. Is that partially due to Brooklyn's suspect perimeter defenders? Sure, but Brown has also capitalized on the hand he's been dealt.

The Celtics are helping make his life easier too. In Game 3, they slipped in some two-man actions with Brown and Tatum, and gave Brown some early off-ball screens to get him running.

In the above reel, you'll see Brown slip his down screen in the first clip, catching Brooklyn off guard and creating a wide-open half-court dunk.

In the second clip, Tatum gives Brown the down screen for him to cut with; this time Brooklyn switches well and forces a missed floater. Boston tried a similar play with Brown and Daniel Theis in Game 4; Brown sealed off Curry behind him and took his time against a switching Andre Drummond to nail a mid-range shot.

Then, in the third clip, Theis screens for Brown early, putting Curry behind on the handoff. Then, it's up to Brown's aformentioned strength to finish over Nic Claxton.

Perhaps the most promising wrinkle in Brown's recent play, though, has been his court vision on these drives. His 1.5 assist-per-game average via drives is tied for eighth in the postseason. The types of reads have varied greatly, from a strong-side kick to the corner, to a dump-off to a big, to a mind-blogging outlet pass.

Regardless of the method, Brown has consistently recognized where the Nets are helping on his drives and passed accordingly. Sometimes his reads are a bit too bold and result in turnovers. I appreciate the ambition and the pressure Brown applies, even if some mistakes slip through.

Not a make but Jaylen Brown is showing the full arsenal as an offensive catalyst right now pic.twitter.com/sDdJHt5iXj

We haven't even seen Brown fully tap into his ability as a perimeter shot-maker yet. He's drilled some ballsy step-back threes, but has also been prone to slumps and is shooting 21.1% from deep through one round of the playoffs. I expect Brown to find his footing as long as he keeps positioning himself for open looks.

It's one thing to bombard smaller matchups against a smaller Nets defense. Can Brown match the aggression against bigger units that Boston could face in Milwaukee or Chicago?

Taking control in transition is a safe way to establish a pace. The Celtics ran all over Brooklyn in the first round, averaging a postseason-high 1.46 points per possession and 24.0 points per game on transition plays. Brown's average of 5.0 transition possessions per game is the second-highest of any player this postseason behind only Giannis Antetokounmpo.

With Tatum doing his thing, Jaylen Brown should continue to receive more favorable matchups as the Celtics move through the playoffs. His responsibility is to keep ratcheting up the pressure on opposing defenses.