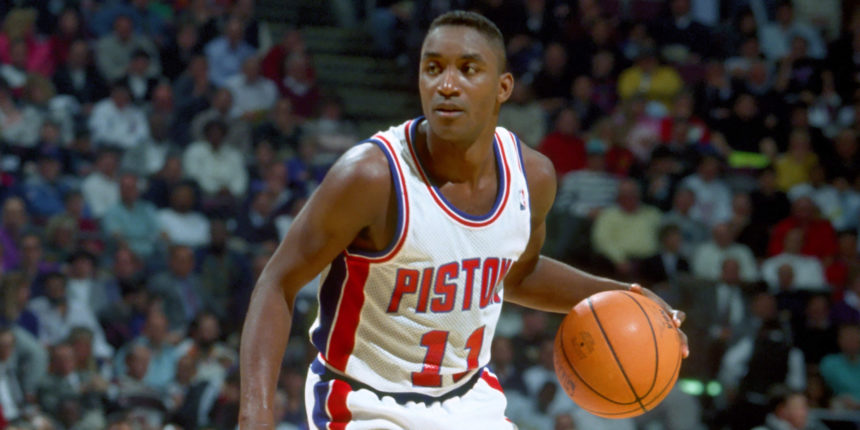 Isiah Thomas on MJ, Magic and Bird: 'My teams beat all of them'

There is a good reason the 1980s are called the golden era of NBA basketball. There were so many great teams and players entrenched in historic rivalries that it’s impossible to look past that time. From Larry Bird’s Celtics and Magic Johnson's Lakers, to Isiah Thomas' Pistons and the rising Bulls with Michael Jordan, the NBA didn’t lack star power.

While we often hear stories about MJ, Larry and Magic as arguably the best three players ever, one Hall-of-Famer that's typically (and surprisingly) left out of that tier is Thomas. Recently, Zeke made a point to remind everyone how he fared against the best players in the toughest era ever.

His Detroit Pistons are one of the best teams in NBA history, and their reputation preceded thems. The nickname “Bad Boys” was rightfully earned, as their rugged, physical and defensive-minded style of play frustrated opponents all over the league. Of course, the occasional cheap shot from bruisers like Bill Laimbeer, Rick Mahorn or Dennis Rodman didn’t help either.

But you had to give it to them. Near the end of the ’80s, those Pistons teams entered their prime and dominated the NBA, bouncing out Jordan’s Bulls numerous times, and even Bird’s Celtics. After a dramatic seven-game series loss in the 1988 Finals to Magic’s Lakers, the Pistons would come back with a vengeance, sweeping them the following year to win an NBA championship in 1989.

The year after that, in 1990, they dominated the Blazers to win their second one. If not for that dramatic loss to the Lakers that was majorly influenced by Thomas' ankle injury, the Pistons may have three-peated in 1991.

At the end of that year, Jordan and Pippen finally overcame the Pistons and became the king of the East, as Detroit slowly faded away.

The Bad Boys will be remembered in history as one of the most unique and fun teams in history, and everyone knew them for their defense and hacking style of play. But this team was much more than that. On the other side of the floor, they could light you up if needed; after all, Thomas was a part of the 1983 team that scored 186 points in a game.

Recently, Thomas spoke with Channing Frye and explained to people how good he and his Piston teams were by simply reminding him how he beat everyone’s favorite players in the ’80s:

“All them people that they say are the best to ever do it, my teams beat all them.”@IsiahThomas talked about his ‘Bad Boy’ Pistons teams with @channingfrye on an all-new ‘Full-Bodied’ 👀 https://t.co/N0wzkgGfw6

Zeke is right on point. Detroit's defense was its forte, but the Pistons wouldn’t have been so good for years if they didn’t have a talented, complete team.

When you talk about the 80’s Pistons and Isiah Thomas, you have to take a deeper look at their legacy and give them respect.