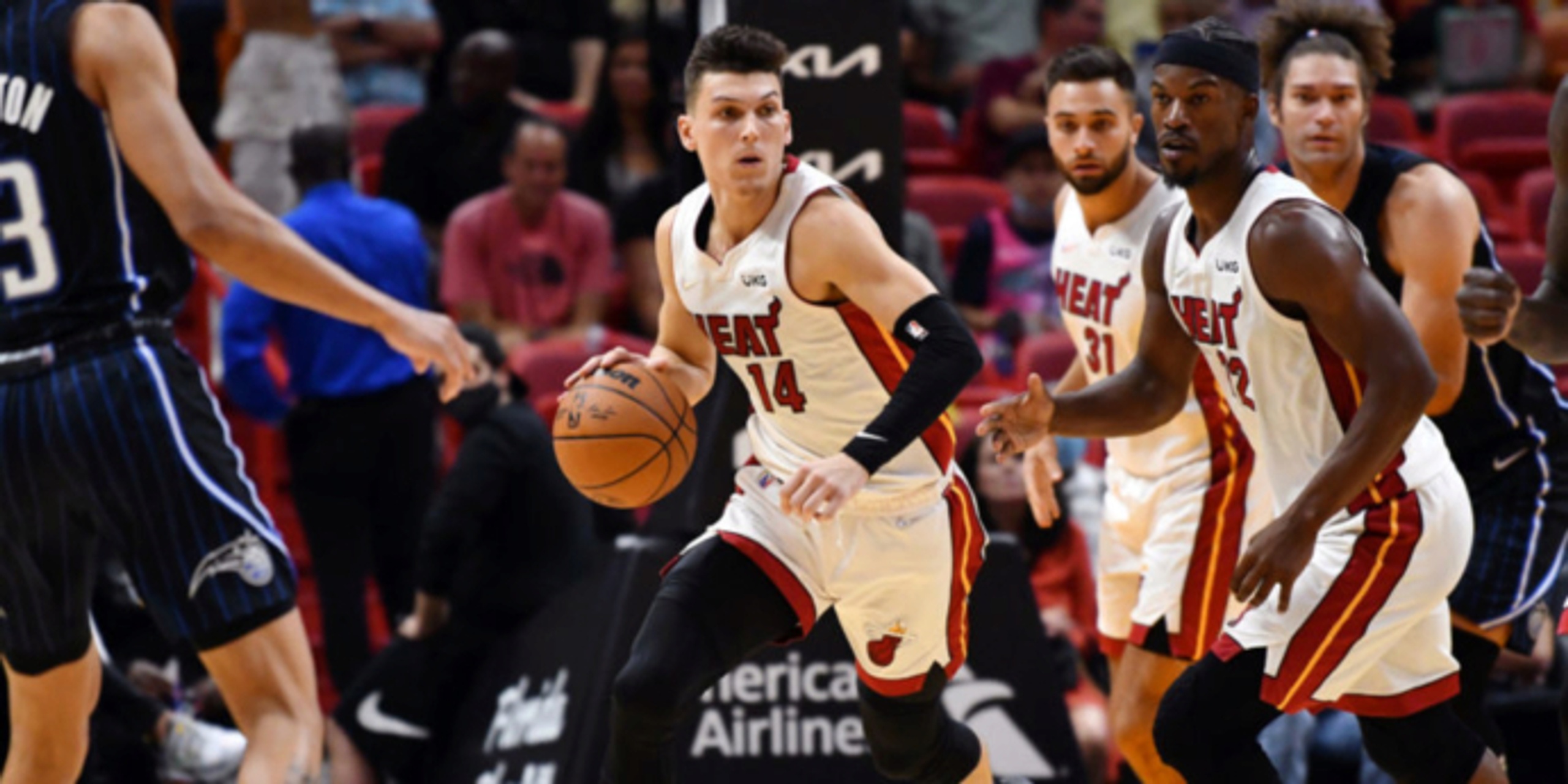 Heading into the 2021-22 NBA season, we knew two teams in the Eastern Conference sat atop the top tier. Now, early on, it looks like we should begin to make room for another one alongside the defending champion Milwaukee Bucks and Brooklyn Nets.

Say hello to elite status, Miami. Carrying a 4-1 record into a huge tilt in Memphis on Saturday night, the Heat have looked every bit the part of a team that’s figured it out quickly. We already knew Miami would be nestled within the top four or five seeds come playoff time, but the way they have performed thus far could lead to some early long-term calculus changes.

It's no surprise, but the Heat have the NBA’s best defensive rating, holding opponents to 93.6 points per 100 possessions. Kyle Lowry, who Miami acquired via sign-and-trade from the Toronto Raptors this offseason, fits like a glove next to Jimmy Butler. A grizzled, tough veteran in PJ Tucker forms a scary frontcourt combination with Bam Adebayo, as teams are learning early and often it’s going to be tough sledding every time down the floor offensively. In the 101 minutes Tucker and Adebayo have shared, they are carrying an incredible 87.0 defensive rating. On top of that, all of the top defensive combinations in the NBA include Tucker.

Miami not only hit a home run with Lowry and Tucker, but it’s looking like the bases were loaded and a grand slam is about to land in the balcony seats. Kudos to Pat Riley, because he crushed this past offseason for the Heat. After a disappointing 2020-21 campaign falling well below the expectations raised within the Orlando Bubble to a Finals run, Miami went out and sought win-now veterans who would raise the overall ceiling within the organization. You won’t find two better fits for “Heat Culture” than Lowry and Tucker as well.

Both have turned into the perfect low-usage complements next to Butler and Adebayo in Miami’s starting lineup. And although Lowry is struggling mightily with shooting the basketball right now — he has been dealing with an elbow issue — we all know that will soon rise into being a perfect third or fourth option for the Heat after years of carrying the torch in Toronto.

Having less creation burden on the shoulders of Butler has produced magnificent results thus far, too. Lowry being able to help distribute the rock has led to Butler being more energized as the two-way bulldog we all know him to be. Butler is averaging a career-high 25.0 points, 7.4 rebounds and 2.8 steals while carrying an outstanding 59.3% True Shooting percentage. The cherry on top has been how Butler’s assists number have maintained to a steady number since his arrival in Miami, only slightly dropping down from 7.1 to 5.2 with Lowry’s presence.

Speaking of less playmaking to worry about, Adebayo has been awesome to watch within this small sample size for the Heat. As the force down low, Adebayo can focus solely on punishing defenders around the basket and returning the favor on the other end. Averaging his lowest assist totals since his rookie season at 1.6 per game, it hasn’t hampered the all-around impact the fifth-year big provides. Now, Adebayo is growing into a 20-plus point-per-game scorer who is near the top of the NBA leaderboard in rebounds (14.0) as well. Adebayo has now consistently learned how to feast through contact, as his free-throw numbers have risen to a career-best 6.8 attempts while hitting 85.3% of those opportunities.

Miami has made the job easier on it’s lethal 1-2 punch in Butler and Adebayo, but the biggest storyline in the short and long-term coming out of South Beach right now is the ascension of Tyler Herro. Leading the pack early on for Sixth Man of the Year, Herro is averaging 22.0 points, 6.8 rebounds and 4.4 assists on a 57.6% True Shooting percentage. After a stagnant second season coming off an eye-opening role on a Finals team, this is easily the best Herro has looked. The Year 3 jump is real with the former Kentucky Wildcat, and dare I say he’s looking more and more like the player he idolized during high school and college: Devin Booker.

As did Booker, Herro knows how to snake around defenses and find the shot best utilized to proverbially break defenses backs on a critical possession. If you squint hard enough, the third-year comparison between Herro and Booker isn’t that far off (albeit on a very small sample size right now):

If Herro is indeed taking a similar leap like Booker did, Miami is in the driver’s seat. Herro becoming a Booker-like player would change their entire trajectory moving forward. Herro’s basketball IQ has taken a noticeable jump forward as well, which has been massive to his overall growth displayed for Miami. The next step in his evolution will be to find the free-throw line more often, which will take the 2019 No. 13 overall pick to a new stratosphere.

With one of the best head coaches in the Association, Erik Spoelstra, on top of a well-rounded rotation, the Heat seem like a team just now beginning to rev its engines for a fruitful regular season. The veteran additions have been excellent, and the primary young core is all experiencing individual leaps in development. Butler’s job is now much easier thanks to Lowry running the point.

Look out, everyone, because the Heat are officially back to being within the NBA’s elite tier. Now, if this continues on over the next few months, buzz will really begin to sizzle in South Beach about why the 2021-22 Heat are legitimate contenders to reach the NBA Finals.