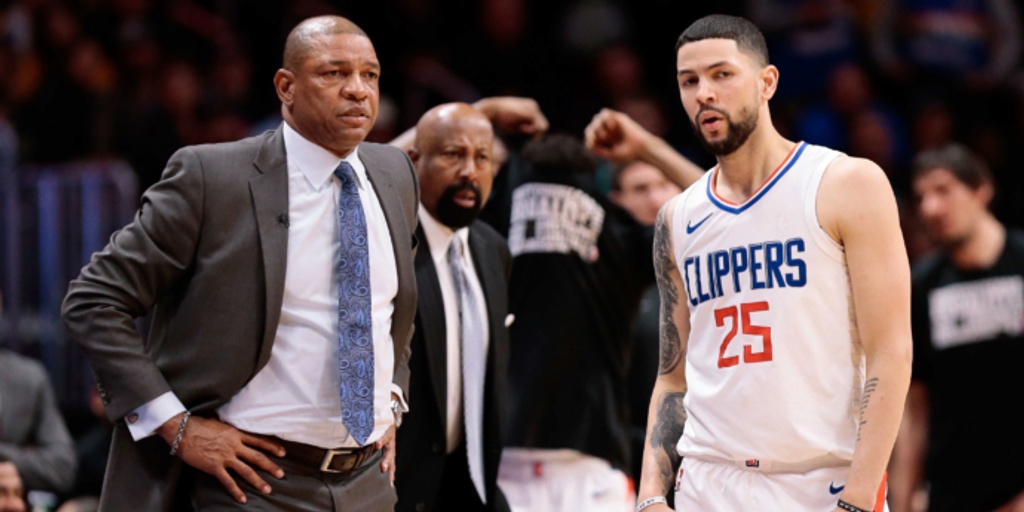 Doc Rivers opens up about trading his son, Austin: 'I was emotional'

During a new episode of “Back On the Record with Bob Costas,” Philadelphia 76ers head coach Doc Rivers opened up about coaching (and trading) his son, Austin Rivers, and son-in-law, Seth Curry.

Rivers admitted that he initially didn’t want to coach Austin, but several members of the Los Angeles Clippers’ front office – including former general manager Dave Wohl – pushed for it.

“It was hard. [With] Austin, Dave Wohl and a couple other guys thought it would be a good idea; I did not like it. I just thought, 'It's just too hard,'” Rivers said. “This is what you want: if you want to coach your son in the NBA, he’s gotta be the best player by a long shot or the worst player by a long shot. Being in the middle makes it hard, because the guy behind him thinks he should play in front of him, and the guy in front of him who he's pushing thinks there's favoritism. So you really gotta walk a fine line.

"It was difficult in a lot of areas. Austin and I were really close and he would come over, but [when I coached him], he didn't want to come over because, you know… It’s a lot of little things like that. But at the very end of it, it was awesome.”

While it was challenging, Austin played the best basketball of his NBA career while in Los Angeles. During the 2017-18 season, he averaged 15.1 points, 4.0 assists, 2.4 rebounds, 2.2 threes and 1.2 steals in 33.7 minutes per game (all of which were career-highs). Then, on June 26, 2018, the Clippers sent Austin to the Washington Wizards in exchange for Marcin Gortat.

“When we decided to trade him, I called him and I was emotional, you know? I'm trading my son. And he saved me,” Rivers said. “He saved me. He was like, 'Dad, I'm all good. I had my best year of my career last year under you. We got to do something that no one else has done! Whether it worked or not, Dad, when we look back on that, who cares? I was coached by my dad in the NBA!’ And that was cool.”

In Philadelphia, Doc had the opportunity to coach his son-in-law, Seth Curry. Seth also had a career-year under Rivers (putting up almost the exact same stats as Austin), averaging 15.0 points, 4.0 assists, 3.4 rebounds and 2.2 threes per game.

Last season, the 76ers dealt Curry to the Brooklyn Nets (along with Ben Simmons, Andre Drummond and two first-round picks) in exchange for James Harden and Paul Millsap. Rivers’ daughter, Callie, wasn’t as understanding as Austin when she heard the news.

“Trading Seth, I had to deal with my daughter... who had two young babies. That's a completely different thing,” Rivers explained. “The night before, because there was a rumor it was going to happen, I get a call from my daughter. 'Listen! Are you gonna do it or not?!’ And I said, 'You know, Callie, I can’t…’ [She says], ‘I’M YOUR DAUGHTER!’ I said, 'Well, Callie, I don't know. I can't...' 'I'M YOUR DAUGHTER!' That was a tough one.

“Well, she ended up in Brooklyn and she is the happiest ever. And for me, I can still get in my car and in 90 minutes, I can be in Brooklyn, so it turned out okay.”