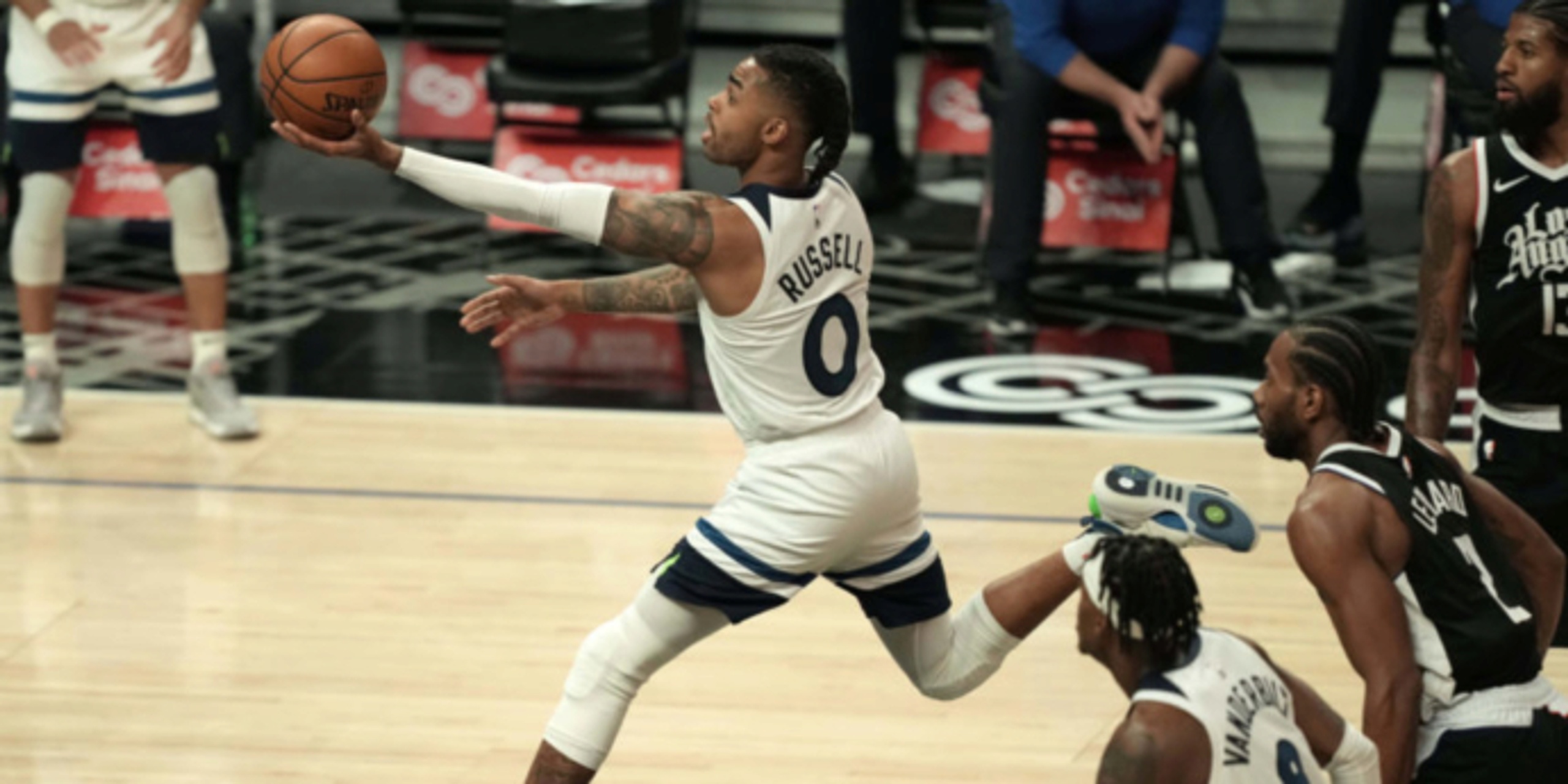 D'Angelo Russell is fitting right in

D'Angelo Russell trots up the floor with a little over two minutes left against the Utah Jazz. A couple of pitches -- from Russell to Ricky Rubio, then from Rubio to Karl-Anthony Towns -- set the stage for Russell to make yet another play.

Russell and Towns flow into a pick-and-roll with an empty corner, putting Rudy Gobert in an impossible situation. Help too far on Russell, and he'll leave a window for Towns. Hang too tightly to Towns, and Russell will have a driving lane to attack. That dilemma puts the onus on Royce O'Neale to help from the "nail" to prevent Russell from waltzing into the lane.

As O'Neale shifts his attention to Russell, Anthony Edwards senses an opportunity. With nobody to track him, he cuts from the left wing. Russell, with Mike Conley on his hip and O'Neale in his area, shovels a pass to the cutting Edwards for a tough finish over Gobert.

This is the vision. Edwards flying into space, pressuring the rim. Russell manipulating defenders with his cadence and court vision. Towns, an all-world scorer, leveraging his gravity to make all of this possible.

We've seen progress of the Edwards-Towns partnership throughout the season. Their pick-and-roll chemistry has grown; subtle screen flips from Towns, pace-changing from Edwards. The result: a two-man game resulting in a lot of buckets.

The Wolves have posted a 114.3 offensive rating when Edwards and Towns have shared the floor without Russell on the floor, a number on par with a top-10 offense. From there, a natural question is presented: how would Russell fit into these plans?

Would he slot in seamlessly as a playmaker and shot-creator, or would the lack of rim pressure hurt, while taking away developmental reps from Edwards in the process?

The early returns point to the former.

Russell's jumper, pull-ups or otherwise, add a dynamic that's been missing with this Wolves group. His quick trigger and deep range put a ton of strain on defenses. Fail to close off his space -- in pick-and-roll, in transition, or even off of sideline inbound passes -- and Russell can make you pay.

The threat of his jumper forces defenders to creep up. From there, he has enough craft as a ball-handler to run his defender into screens and manipulate helpers.

Just peep the layers in that clip. Russell is able to escape to his left, running Conley into the screen. Gobert ventures out past the three-point line to cut off a potential drive or pull-up from Russell. Russell counters with an in-and-out dribble to move Gobert, opening up a wider passing window to a rolling Josh Okogie.

A fun wrinkle that's been popping up: using Russell as a screener to force defenders into uncomfortable positions. The Wolves used the gambit to generate their game-winner against Utah on Monday night.

Again, it's an example of the Wolves using their core in tandem. Edwards flies downhill off a Towns screen with O'Neale trailing him. Gobert drops to offer some support, but that leaves him susceptible to the screen Russell sets.

The Jazz are then tasked with two choices: either switch the Russell screen and leave Conley matched up with Towns, or keep their base matchups and try to recover. They clearly choose the latter; Gobert jets to the perimeter to stay attached to Towns, leaving Russell open for the cut.

The Wolves have now played 160 minutes with Russell, Edwards, and Towns on the floor. They're posting an absurd 119.8 offensive rating in those minutes, one of the league's highest marks among high-minute trios. Their net is negative because of the defense: a 121.9 defensive rating won't cut it.

In order to make things work long-term, the Wolves will need to find the right combination of forwards to complement the group defensively. Okogie and Jaden McDaniels have most frequently been paired with those three, and the lineup has a 96.1 defensive rating in 51 minutes. The sample is obviously small, but that blend of length and athleticism is the blueprint to make things work.