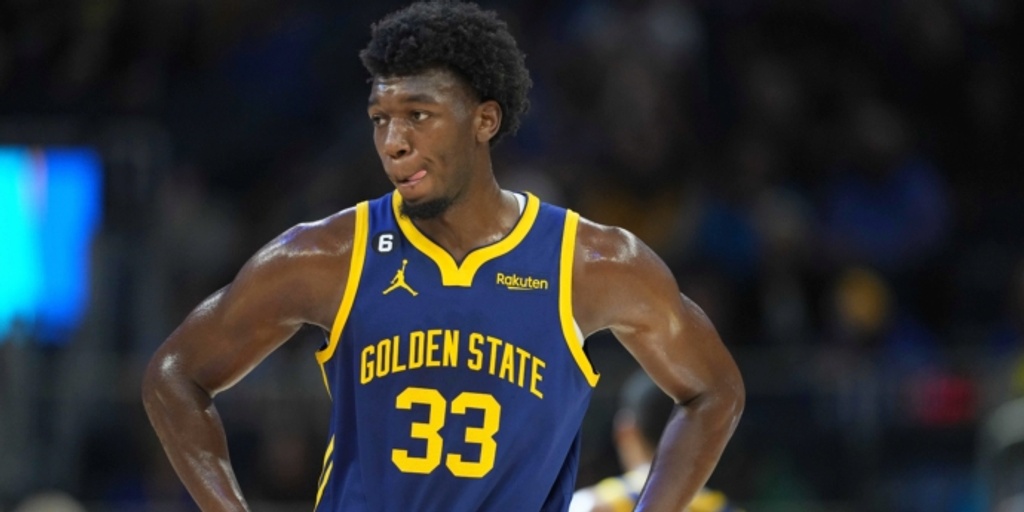 A James Wiseman-Warriors split would be best for both parties

This is not a declaration that James Wiseman is a bust, or some irredeemable player. He is not the only issue with the Golden State Warriors, or even the Warriors' bench unit.

Conversely, this won't be a Warriors slander piece. If you were looking for either of those conclusions, you can close the tab (and thank you for the click).

Now that we have that out of the way: Wiseman being with the Warriors doesn't appear to benefit either party right now. A center with enough face-up and shooting flashes to raise your brow probably shouldn't be relegated to only screen-and-roll duties.

And a win-now team spearheaded by one of the greatest players of all-time in Stephen Curry, who's still playing at an all-time level, shouldn't be tasked with being superhuman because the team bleeds points every time he sits.

It's important to note that point isn't solely on Wiseman; we're all waiting on Jordan Poole to regain his form (53.5% True Shooting, 59.8% TS last season) and confidence, for example. Head coach Steve Kerr has recently alluded to leaning on more experienced role players like [check notes] Anthony Lamb and Ty Jerome instead of the trio of Wiseman, Moses Moody and Jonathan Kuminga.

But think about who the Warriors are at their best. Quick, versatile, shape-shifting. It's a buzzsaw of cuts, relocations, ball-movement and switchability, We've seen how Moody fits into that. We've seen how Kuminga can fit into that, especially when he's able to log minutes at the 4 (or 5).

Have we really seen that from Wiseman? Part of the appeal was that he didn't fit snugly into that; his vertical presence and overall athleticism was a stark difference to what the Warriors had in their frontcourt room. In theory, being able to mix in his dynamic would make the Warriors even more difficult to deal with.

We've seen flashes of that: the Warriors generated 1.03 points per possession (PPP) on trips featuring a Curry-Wiseman ball screen during Wiseman's rookie season, per Second Spectrum. It's easy to see how Wiseman's downhill juice could vibe with the flamethrowing of Curry.

But in order for him to carve out a more consistent role, there had to be growth in the more "Warrior-like" elements. That growth hasn't happened at an ideal rate, mostly because Wiseman hasn't been able to stay healthy.

They rarely use Wiseman as the hub for their patented post-split action, mostly because he has limitations as a passer. That would be okay if he had more juice as an off-ball screener, but he's still trying to master the details of timing and angles. His results are spotty right now.

Defensively, Wiseman is even more of a mixed bag. Because of his size and length, he can act as a true deterrent at the rim. He has legtimately good reps in drop on film. But because of his footwork, drop seems to be the only coverage he's truly comfortable in.

Add in the process of figuring out the gap in drop — how far he should play back, when to step up to ball-handlers, and not giving away easy reads in the process — and you get more messiness than positivity. Pull-up shooters can find pockets to attack; drivers often have space to chew up.

He'll often find himself slightly out of position, which alters the strength of his contests. For a guy with his gifts, it's kinda wild how often you'll see ball-handlers driving through his chest — or drawing fouls.

The numbers aren't great. Opponents are generating over 1.2 PPP on trips featuring a ball screen defended by Wiseman. Among players defending at least three shots at the rim per game, Wiseman's efficiency allowed (70.3% FG) is one of the worst marks in the league. On top of that, he's averaging 6.8 fouls per 36 minutes — a mark higher than his rookie campaign (5.2).

The Warriors would operate better with a veteran 5; it's part of why they brought JaMychal Green into the fray over the offseason. And frankly, I'd like to see Wiseman with a team that can really prioritize his development without championship pressure.

I'd make a call if I were the Oklahoma City Thunder, just by virtue of having 1.5 true centers on the roster. With Chet Holmgren done for the year, you can afford to give Wiseman a bit of a runway. And for the Warriors, there are vets (hello, Mike Muscala and Kenrich Williams) worth inquiring about. Heck, there are also younger players (hello, Jeremiah Robinson-Earl and Aaron Wiggins) who may be better equipped for what they want to do than Wiseman is right now.

There could be similar appeal in San Antonio, who may be willing to take another young flier in the frontcourt in light of the Zach Collins injury news. They've already spun the tires on Charles Bassey; I'd at least see what the interest level would be. There are vets to inquire about (Josh Richardson, Doug McDermott, Gorgui Dieng), though it's worth noting that the Warriors might have to add something minor to the pot to pry Richardson or McDermott out of there.

(This is likely a no-go because of how the draft went, but Wiseman under the tutelage of Steve Clifford in Charlotte would also intrigue me.)

Again: none of Wiseman's issues are impossible to overcome. With continued health, I'd honestly bank on him overcoming most of them. There's a good player in there; even the archetype he's been kinda pigeonholed into thus far — a rim-running dunkaholic who can man the fort in drop — has value on good teams.

Considering the Warriors are getting blitzed in his minutes — a minus-22.4 net rating with opponents converting nearly 59% of their twos — I'm just not sure if the Warriors can give him the time to work through those growing pains while also trying to compete. It would behoove both parties to look for an alternative.