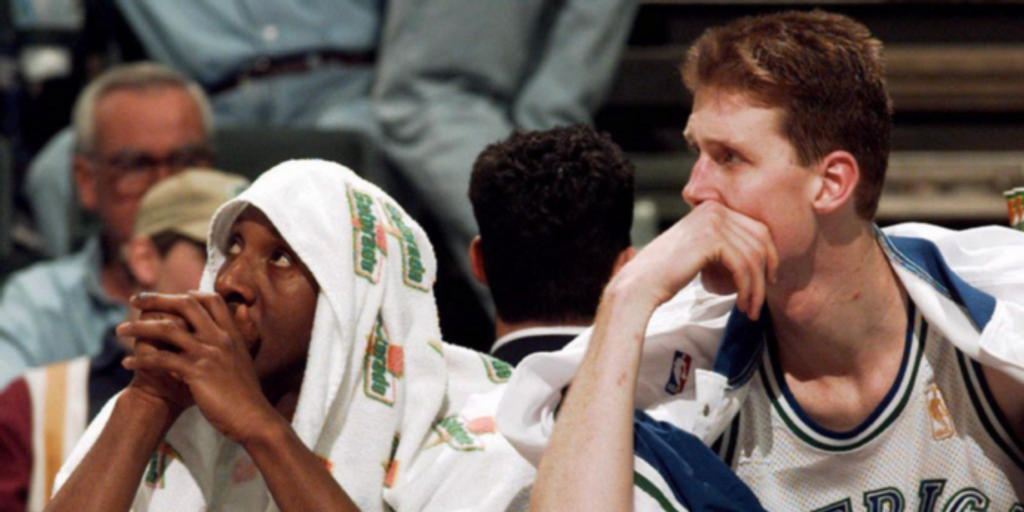 25 years ago, the Mavericks scored just 2 points in an entire quarter

Anyone else love going back and looking at old box scores and falling down afternoon-long rabbit holes, or am I the weirdo?

You might’ve read the headline and either recalled this event actually happening, or are befuddled at how such a thing could take place, even in that NBA.

This article, published on April 6, 2022, marks 25 years since the Del Harris-led Los Angeles Lakers held Jim Cleamons and his Dallas Mavericks to 2 points in the third quarter of a regular-season game.

The contest was held at the LA Forum, where a 50-24 Laker team met a 22-53 Mavs squad with two weeks remaining before the playoffs started. Staples wasn’t that big yet, and Crypto didn’t exist. (Some might say it still doesn’t, but you can fight about that amongst yourselves.)

A large-ass, Biggie verse-having, All-Star center named Shaquille O’Neal had been out with a knee injury suffered that February, which he returned from five days later. Something tells me, if you made it here, you’ve heard of him. Also on the Lakers, quite famously, was a talented rookie named Kobe Bryant, who had been playing regular rotation minutes at 18 years old, but wasn’t yet Kobe.

The Mavericks had traded a controversial-but-talented point guard in Jason Kidd earlier in the season — along with Tony Dumas and Loren Meyer — to the Phoenix Suns for a package highlighted by Michael Finley, Sam Cassell and A.C. Green. They also dealt Jamal Mashburn to the Miami Heat several weeks later for Kurt Thomas, Sasa Danilović and Martin Müürsepp.

And right before the deadline, Dallas rerouted Cassell as part of a five-man package including Jim Jackson, George McCloud (who wound up on the Lakers retroactively), Eric Montross and Chris Gatling for Shawn Bradley, Khalid Reeves, Robert Pack and Ed O’Bannon — famously the Most Outstanding Player of the 1995 Final Four, and killer of EA's NCAA Football and NCAA Basketball video game franchises. This move not only cemented Dallas’ rebuild, but it officially made way for a Toni Braxton-less future in Texas.

The Mavericks, who came in as losers of 10 straight heading into this game — a lengthy skid that never saw the team score more than 92 points — went into Hollywood and started Pack, Finley, Green, Bradley and Derek Harper. Without Shaq, the Lakers began with Derek Fisher, Eddie Jones, Jerome Kersey, Corie Blount and Sean Rooks, who played a game-high 43 minutes (33 over his season average).

The Mavericks led 30-17 after the first quarter and 51-37 at halftime. The teams combined to attempt 12 threes in the first half, which most teams would typically combine to do in a quarter today. The Mavericks shot 21 of 44 from the field and outrebounded the Lakers 24-16 while holding L.A. to 12 of 32 shooting.

Bryant and Robert Horry went a combined 2 of 9 off the bench, and Rooks had logged 10 points and 7 boards to that point. Harper and Finley combined for 25 points on 9 of 15 shooting, while Bradley had 9 points and 9 rebounds.

Okay, now let's get to why you’re here.

Not only did the Mavericks score 2 points in the entire third quarter, but the points came from a pair of Harper free throws with 1:51 left in the quarter. So it took over 10 minutes to even get on the board in this period.

Anyway, the Mavericks shot 0 of 15 from the field for the quarter and missed all 4 of their three-balls. They also had 9 turnovers and only made one substitution over the entire 12 minutes, removing Pack for Saša Danilović about halfway through the third. That meant Green, Harper, Finley and Bradley were each a minus-25 for the quarter, and Pack was a minus-20.

For good measure, the Mavericks third quarter could be summed up like this:

The Lakers outscored the Mavericks 27-2 and still just led 64-53 after three. L.A. shot 10 of 17 in the quarter, made 5 of 7 triples, only needed to pull down 8 rebounds and turned the ball over just twice.

The Mavs outdid their horrific third quarter only 48 seconds into the fourth with two layups. They even cut their deficit to as close as 7 points in garbage time before the Lakers pulled away with a 87-80 win.

Fisher scored 21 points — not even close to a career-high for him — but to that point, his highest point tally had been just 14. In fact, the 21 points would remain a career-best mark for Fisher until he netted 26 points on March 13, 2001 in a win over the Boston Celtics four years later.

Sean “2019 Bam Adebayo” Rooks ended the night with 15 points, 11 rebounds, 5 assists and 3 blocks. Bryant logged about 22 minutes off the bench, netting 13 points on 3 of 9 shooting, also finishing with 3 steals and going a perfect 5 of 5 at the free-throw line.

So, what ended up happening to these two teams? Glad you asked!

The Lakers finished 56-26 and fourth in the Western Conference, sweeping the Kenny Anderson, Isaiah Rider, and Rasheed Wallace-led Portland Trail Blazers in Round 1. Then, in the West semifinals, L.A. fell to the No. 1 seed Utah Jazz, who eventually lost to the Chicago Bulls in the 1997 NBA Finals. The Lakers still had a few more years of Harris before Phil Jackson eventually came to clean things up prior to the 1999-2002 three-peat era.

The Mavericks finished 24-58 and were actually still fourth in the Midwest Division among seven teams, completing 1996-97 with only the sixth-worst record in the league. Unfortunately, they didn’t own their own draft pick, but fortunately, the Celtics — who had it at No. 6 — used it on Ron Mercer, so it wasn’t an egregious miss.

Tracy McGrady did go No. 9 overall, and the Mavs did settle on Kelvin Cato at No. 15, but they landed with a kid named Dirk Nowitzki in the 1998 NBA Draft after another 20-win season.