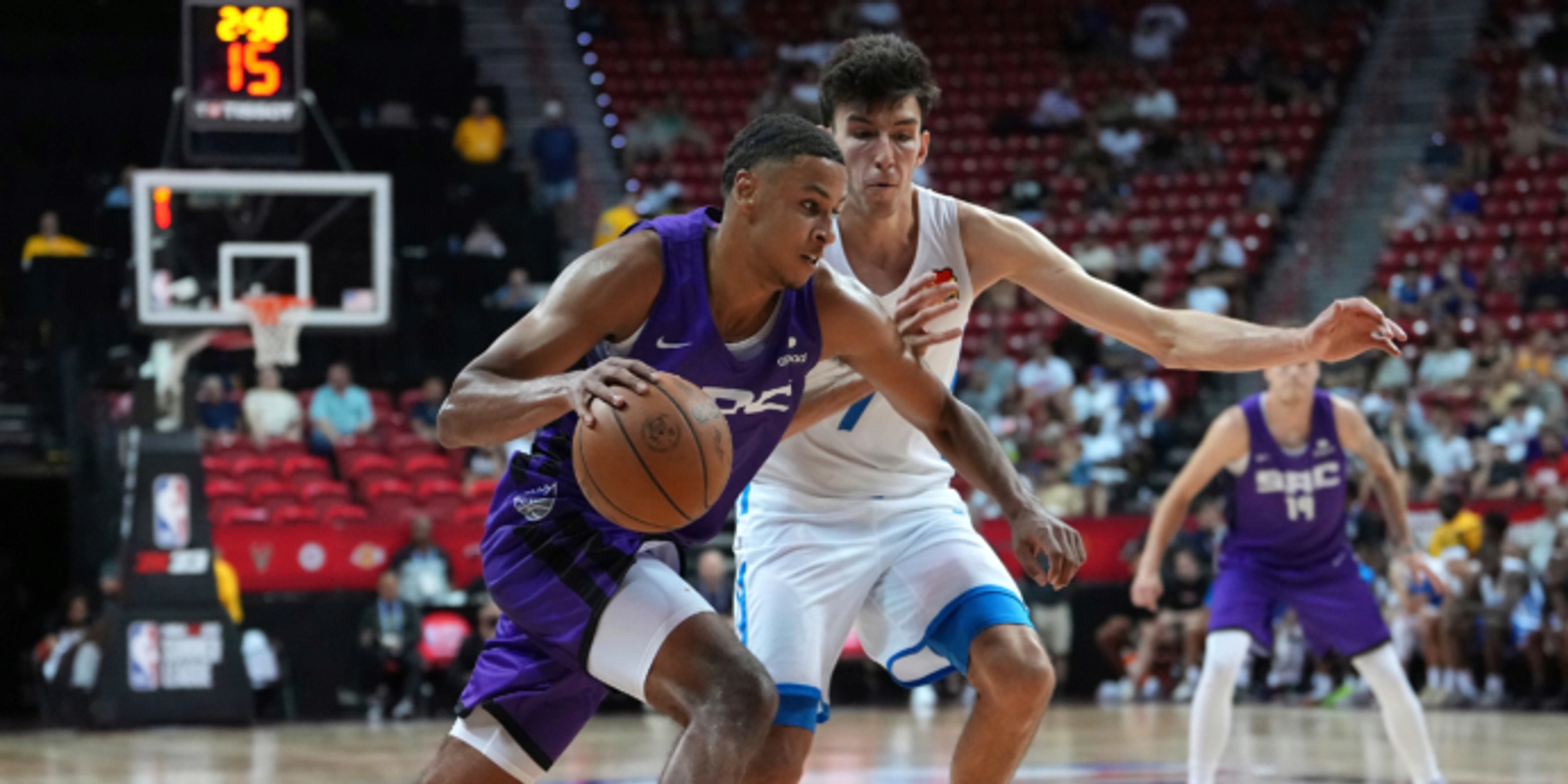 NBA Summer League is well past halfway, and we continue to see new faces stand out every single afternoon.

While Keegan Murray remains perhaps the story of the summer with the Kings, two rookies also went head-to-head in a duel between the Cavaliers and Hornets. Older NBA hopefuls also showed out, including a first-round castoff from five years ago.

As we forge on in the Las Vegas heat, here's who popped on Day 7:

Sandro Mamukelashvili set the tone for the @Bucks in their @NBASummerLeague win!@Mamukelashvili5: 18 PTS, 15 REB, 2 BLK pic.twitter.com/G4jrt5aL6v

Mamukelashvili has been one of the more dominant second-year performers at Summer League. On Wednesday, he outmuscled a smaller Timerwolves team on the glass. He finished off buckets as a pick-and-roll and pick-and-pop player, a testament to how Mamukelashvili can be used as a versatile offensive piece.

The second-round pick also put together nice moments as a passer. He made one impressive drive-and-kick read to a relocating MarJon Beauchamp for a three-pointer and added some more assists simply by connecting to the right shooter. Hopefully the Bucks coaching staff is scheming up ways to get Mamukelashvili involved during the regular season.

He finishes with 5 3PM and 24 PTS pic.twitter.com/c0s9cP8VZC

It's all about ironing out scoring and playmaking consistency with McGowens. But when he's on, as he was Saturday, McGowens is a textbook walking bucket. Four of his five made triples were pull-ups, hinting at serious potential as a long-range scorer.

Though he only had one assist, McGowens flashed promise as a playmaker as well. He hit LJ Figueroa in the opposite corner with a laser in the third quarter, only for Figueroa to miss the shot. McGowens' three turnovers were emblematic of an inaccurate passer playing a bit over his head — but also a driver with impressive court vision who can see reads opening up. Oddly enough, some of the turnovers made me feel better about McGowens' passing upside — he just needs to improve at hitting his teammates.

Ochai Agbaji balled out and had @CJMcCollum impressed today 🤩

Agbaji put together a smooth and confident scoring performance. The No. 14 pick used some double screens to free himelf for pull-up threes, and knocked down one off the catch via a pindown. He also worked his way into mid-range shots off the dribble and rarely felt rushed. On defense, he made two impressive reads as a helper, intercepting passes to a Charlotte roller and weak-side shooter. Cavs fans must be feeling optimistic about Agbaji's fit as a perimeter threat with a stable-enough defensive floor to stick in the rotation.

🇱🇹Deividas Sirvydis ('00) was feeling himself tonight.

Showcasing his shotmaking from range, ability to make OTD shots, attacking downhill off-screen and some tiny defensive flashes as well.

Sirvydis went at No. 37 back in the 2019 NBA Draft as a draft-and-stash selection to the Detroit Pistons. He spent two seasons with the team as a reserve, but now gets another shot with the Pelicans. The lefty broke out on Wednesday, confidently drilling threes in a variety of contexts for New Orleans.

His lone block was also an impressive play; Sirvydis switched onto a speeding Devon Dotson and stayed with him on the drive, finishing with a rejection. Basketball Reference lists Sirvydis as 190 pounds, but he appears much bigger and stronger entering his third NBA season.

Keegan Murray scored 29 against OKC in a loss. The No. 4 overall pick has been HOOPING. pic.twitter.com/tfOH4MhKtW

Murray was mostly matched up against fellow top pick Chet Holmgren, and the fourth overall pick came out the victor. He blew by Holmgren off the dribble and was able to finish, even through Holmgren's well-known vertical wall. But Murray also powered through other imposing defenders like Eugene Omoruyi. His determination to convert at the rim was impressive, and it complemented his gravity from beyond the arc.

Though he wasn't a flawless overall defender, Murray exhibited active hands and awareness away from the ball. His steals came by cheating over on an unsuspecting dribbler and poking the basketball away. I wouldn't be surprised if the Kings opted to pull Murray from the final days of Summer League. He's been one of the top rookies over the last week and doesn't have much more to prove here.

Wilson is one of several older, former first-round picks who are fighting for their NBA spots this summer. Once the No. 17 pick to Milwaukee back in 2017, Wilson also played for Houston before suiting up for just four games with the Raptors in 2021-22. This is pretty close to a make-or-break opportunity for him.

Wilson canned just 24.4% of his three-point attempts in 14 games with the G League's Raptors 905 last season. He's 5-for-10 in his last two Summer League games and appeared comfortable spotting up on Wednesday. Wilson also knocked down a jumper from the free-throw line and faded away on the baseline for another basket.

Analysts billed Todd as an intruguing long-term play for Washington when he was selected at No. 31 in last year's NBA Draft. Todd's physical tools and flashes of three-level scoring keep you interested, but he's still a ways away from NBA rotation minutes. The box score isn't everything, but Todd not picking up a single rebound, assist or steal is fairly telling for his impact beyound getting points. The Wizards tried to work him off screens and cuts, and Todd found quality looks, but didn't convert enough of them on Wednesday.

Brooks is a pure sharpshooter and one of the better microwave perimeter scorers in the entire NBA. But if he's cold, his offensive impact rapidly deteriorates. Brooks simply couldn't get a bucket to fall in Toronto's loss to the Jazz. He did have three assists, but only one really caught my eye: a nice drop-off to David Johnson in transition. Brooks' cold spells kept him from being a rotation mainstay with the Raptors last season. We'll see if he can warm up during training camp.

Miami has created one of the best defenses in NBA Summer League, and the Heat guards made life difficult from Brown. He was forced into a ton of tough runners and contested layup attempts that did not land. That being said, he also missed some open three-pointers he needs to make. Brown did shoot 40.0% from long range on high volume with the Blue Coats, so the rough day might be more a product of Miami's defense throwing him off.

Boston Jr. has made six of his last 27 field goal attempts in two Summer League games. After getting to the line 12 times to salvage his prior performance, the 2021 second-round pick didn't attempt a single free throw. He's still an inconsistent jump shooter, and the Clippers are clearly letting him experiment more as a creator in this setting. Boston added about 10 pounds to his long frame, but still struggled to finish through contact on some plays. I remain very interested in his long-term development, though, and this dud should just be viewed as him working through mistakes.