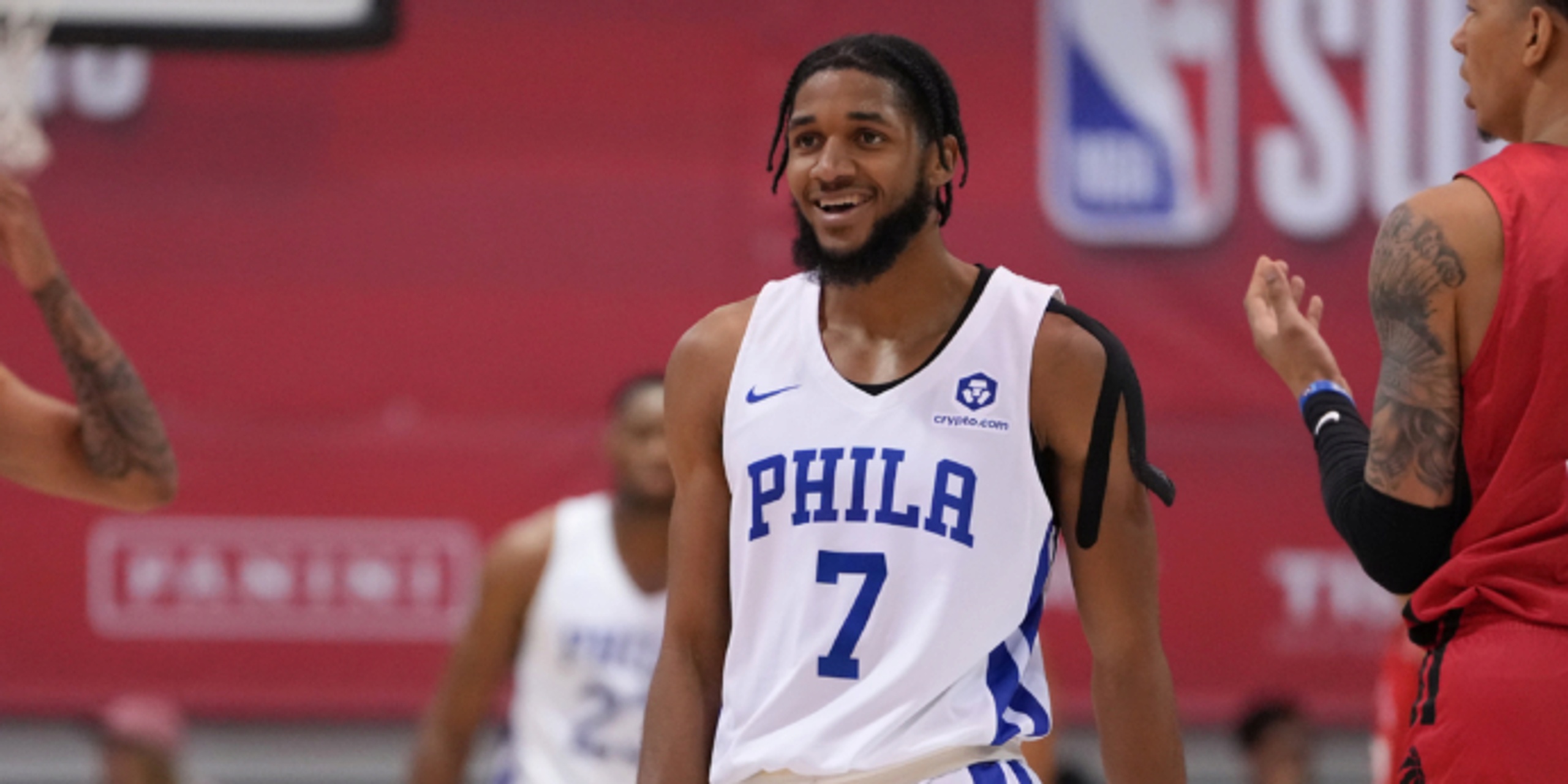 Those who follow NBA Summer League embrace it for two reasons. Number one, it's a chance to revel in the next generation of basketball talent and establish a baseline for players as they develop. Secondly, it's just a wacky event.

We got sudden-death double overtime in Saturday's matchup between the Sacramento Kings and Orlando Magic, complete with a timeout call to run a set, an extended replay review and a chaotic final basket. The Thomas & Mack Center turned into a playoff environment for a result roughly 2% of the attendees will remember a year from now.

But hey, le's enjoy the weird! Here are some of my standout picks from Day 3 action, including three players from the aformentioned Magic-Kings battle.

Joe unleashed an electric shot-making performance. He was constantly moving with and without the ball, flying around screens for three-pointers and slashing to the bucket as a cutter. But Joe also dazzled as a lead playmaker. He took Ron Harper Jr. off the dribble on one play and stopped on a dime for a pull-up from the left elbow.

We knew Joe was a scorer though. He further wowed me with how he defended, even forcing a jump ball when Toronto Raptors rookie center Christian Koloko tried to back him down on the low block. Joe entered the league at 165 pounds, and there's absolutely no way he's close to that now. The 2020 second-round pick looks and plays stronger than he did two years ago, and that might help him crack the 76ers' rotation.

Delano Banton beats the buzzer from 3 🎯

Armoni Brooks led the Raptors in scoring and surged late in the game, but Banton impressed me most Saturday. Banton scored 14 points in the third quarter alone, as Toronto pulled away in a great game against the 76ers. The 6-foot-9 point guard had a couple of impressive takes to the basket and appeared more comfortable shooting beyond the arc after making just 25.5% of his threes in the regular season.

Banton also impressed me with his passing, and consistently applied pressure as the lead guard. On one possession, he drove into the paint, stopped, pivoted and hit Koloko on a wraparound bounce pass for an easy layup. He did have 7 turnovers, but Banton committed a few just because he was a bit too ambitious with his reads, which doesn't have to be a bad thing at Summer League.

The No. 1 overall pick continues to turn heads. Banchero's passes, including the above video, were off the charts against the Kings. He kicked the ball out to the corners, made weak-side reads and threw a no-look dime to a backdoor-cutting Devin Cannady.

Banchero was also notably active defensively for a player with question-marks on that end during the pre-draft process. He picked up two monster help-defense blocks, one of which saved Orlando from a Kings dunk to end sudden-death overtime. It feels like Banchero gives Magic fans an element to get excited about every game.

The No. 39 pick from the 2021 NBA Draft made his case for a full contract after playing on a two-way deal as a rookie. At 7 feet tall and 245 pounds, Queta feasted against the smaller Magic frontcourt. He found success as a roll man and lob threat, and threw in a couple of putbacks. Queta attempted two threes all last season across the NBA and G League, so I understand the surprise when he canned a huge shot as part of Sacramento's miraculous comeback.

Murray is here as a shooter. His perimeter game looks so effortless, and he hit shots from a standstill and off movement over the contests of players like Banchero. Murray can square up to the basket so easily as he turns into a jump shot, and everything about his release is clean and consistent.

His other make came when he attacked a closeout and hit a pull-up from the free-throw line. I'd like to see if Murray can get to the rim more, but the Kings have used him mostly as a movement weapon, so he hasn't received many on-ball opportunities. Hopefully he gets some more reps as Summer League continues. Murray also had a pretty tough individual matchup against a bigger, stronger Banchero.

From defense to offense, Jabari rips the ball from Chet which leads to a Tari Eason dunk 😮‍💨 [F] pic.twitter.com/xZo05Fnpsp

You could pick several Rockets players to highlight, including Josh Christopher and Daishen Nix. I want to spotlight Eason because he's been relentless on the glass, with double-digit boards in his last two games. The two steals and one block also understate how special of a defender he has been so far, both on the ball and in help.

On offense, we saw Eason thrive as a cutter and roller. He also knocked down a three-pointer, which is a major swing skill for his overall offensive impact. If Eason can hit threes at a manageable clip, he'll become an even more dangerous off-ball weapon.

Hauser signed a three-year deal with the Celtics after joining them on a two-way contract as an undrafted free agent last season. This wasn't an inspiring first effort under his new contract, as the second-year forward struggled against a Miami Heat defense that was prepared for his usage. Hauser couldn't consistently generate separation, and battled several strong contests.

I would chalk this up to successful Miami stoppage more than Hauser's own failures, but it's worth monitoring the looks he receives (and how he shoots them) moving forward.

Cooper was a game-time decision for Saturday's contest and only played 18 minutes, so it's possible he was dealing with rust from an ailment. The 2021 second-round pick missed all of his three-point attempts. He showed improvement with a 35.9% clip in the G League last season, but Cooper isn't out of the woods on that shot being a valid concern.

The point guard was also a non-threat at the rim, missing one shot badly and barely getting into the paint against a tough Utah Jazz defense. If there's an positive takeaway, Cooper put together some stronger defensive moments himself. But it was an underwhelming day for a young player with a real shot at claiming backup guard minutes this season.

The No. 10 overall pick made his first shot, a tough fadeaway jumper through contact, and proceeded to miss his next 10. Most of them were just difficult, low-quality looks. Davis wasn't really a threat to pass, and settled for tough fadeaway jumpers, contested pull-ups and far-fetched rim attempts. I admired the physicality, but he just couldn't create anything easy for himself against a Detroit Pistons defense that guarded him tightly.

Memphis summer head coach David McClure had this to say about Aldama's performance on Saturday:

“I think he’s in his head a little bit right now. He’s at his best when he’s just playing basketball. Maybe he’s putting too much pressure on doing one thing or another. When he lets the game come to himself, that’s when he’s at his best.”

Aldama just looks like he's trying to fit too many roles on offense. His perimeter jumper was kind of a mess against the Los Angeles Clippers. Aldama seems best right now when he can cut and work as a connective passer instead of spacing the floor or running actions. It's just very difficult to envision what that role looks like with him, or how he can get those kinds of extended opportunities with Memphis. I'm still a believer in Aldama, but it's been a rocky road for one of the 2021 draft's most polarizing picks.