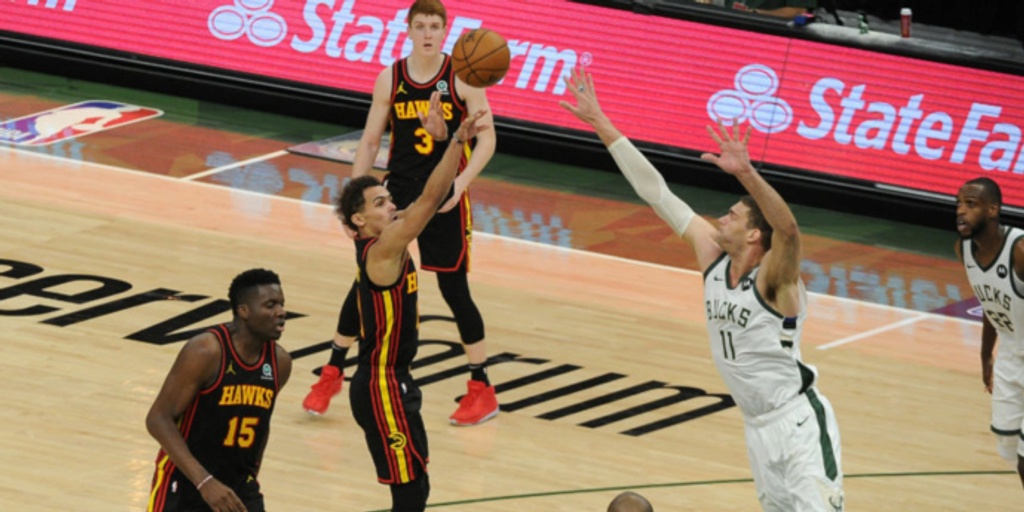 The Atlanta Hawks' path to the Eastern Conference finals provides reason to remain optimistic after a humbling Game 2 loss to the Milwaukee Bucks evened the series at 1-1.

The Bucks also can rely on their postseason history to boost their belief in their championship hopes. This is Milwaukee's second conference finals appearance in three years, following a loss to Toronto in 2019. This talent-rich roster led by Giannis Antetokounmpo was widely expected to contend for a title this season.

Thanks to Friday night's resounding 125-91 win in Game 2, the Bucks take momentum into Sunday night's Game 3 in Atlanta.

“At the end of the day, you know, there’s got to be some urgency, but you still have to enjoy the fact that we’re here, you know, because we worked extremely hard to be in the last four teams standing,” Antetokounmpo said after leading the Bucks with 25 points.

“But you know, now going on the road obviously there is going to be some urgency."

This is only the Hawks' second conference finals appearance in their Atlanta history. They were swept by Cleveland in 2015.

The Hawks, the No. 5 seed, already have surpassed expectations. They finished last in their Southeast Division and missed the playoffs each of the last three years before suddenly learning to win under interim coach Nate McMillan this season.

Atlanta has been an underdog in each playoff round. When facing the New York Knicks in the first round and the top-seeded Philadelphia 76ers in the conference semifinals, the Hawks won their series opener on the road before losing the second game. They have followed the same path against Milwaukee.

The Hawks' staggering Game 2 loss was a reminder they are starting three players — Trae Young, John Collins and Kevin Huerter — who are in their first postseason.

The Bucks never trailed and led by 41 points.

The young Hawks have proved they can win close playoff games. They are 4-0 in games decided by no more than three points and 6-1 when the margin is no more than seven. Now they must demonstrate they are resilient.

“We’ve just got to up our level of competition, of intensity,” Collins said. “I feel like this is part of us growing into the mature players that can handle a championship run, as this is our first. And not to make any excuse, but these are the type of things that happen. It’s on us to improve and make adjustments.”

Young will be challenged to reclaim the swagger he displayed when he scored 48 points in Atlanta's 116-113 Game 1 win on Wednesday night. He had an early highlight in Game 2 when his steal and long jumper cut Milwaukee's lead to 15-12. He celebrated by shaking his shoulders with a shimmy he unveiled in the opening game.

It was a rare highlight on a night of struggles for Young. He had only 15 points and matched his career high with nine turnovers. He accepted responsibility for the loss.

“It was just one of those nights, and sometimes it happens like that,” Young said. “It sucks it happened tonight, but we’ve got to be able to bounce back.”

The 3-point shot is an important part of Milwaukee's attack, but the Bucks proved they thrive when driving to the basket. The Bucks can be expected to try to repeat that winning formula on Sunday night.

Led by Antetokounmpo, the Bucks outscored the Hawks 62-30 in the paint. It was the recipe for the two-time MVP to make 11 of 18 shots from the field while adding a game-high nine rebounds. He was dominant despite missing his three 3-pointers.

“I think he set a tone early,” said Bucks coach Mike Budenholzer. “There were a couple drives and finishes that were kind of just what we expect from Giannis.”

McMillan will be watching to make sure officials continue to monitor Antetokounmpo's time at the free-throw line after the NBA said 10-second violations should have been called late in Game 1. Antetokounmpo made three of four free throws in Game 2 and insisted he did nothing to shorten his routine at the line.

“My mindset going into this game was go through my routine, get as many dribbles as I can, get my breath and just shoot my shot,” he said.

Perhaps the most encouraging sign for the Hawks in the series was the return of Cam Reddish from an Achilles injury. He scored 11 points in 17 minutes in his first appearance since Feb. 21.

“To be honest, that was the only positive thing tonight,” Young said.

“It felt good,” Reddish said. “I was excited to get back out there. Obviously it felt a little bit weird at first, but as the game went on, got better, got more comfortable. I’m looking forward to getting on to the next game.”