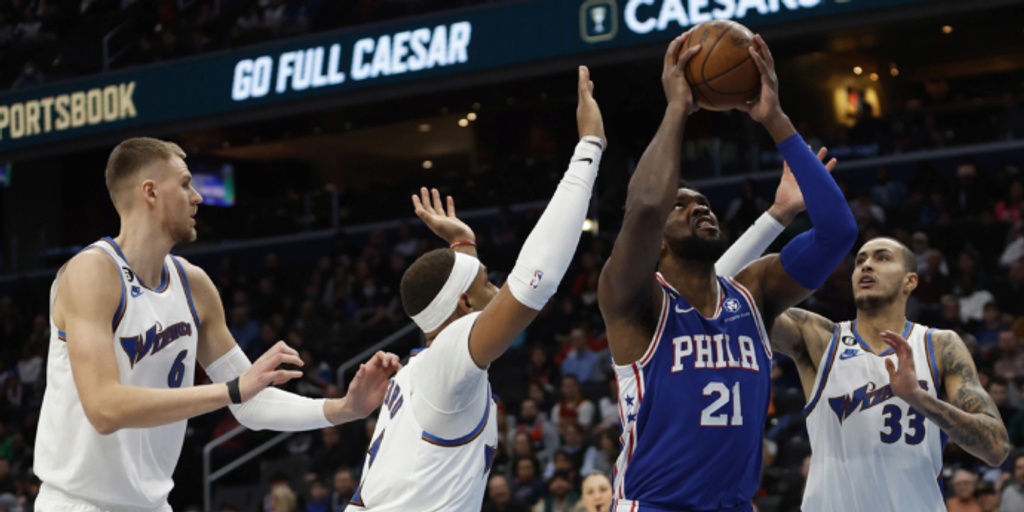 The Wizards withstood a 48-point effort by Joel Embiid and a 26-point, 13-assist performance by James Harden. The 76ers cut a 16-point deficit to one late in the game but couldn't overtake Washington, which played the final 4:17 without Beal.

Beal appeared to injure himself when he collided with Embiid and left the game immediately. It wasn't clear what was wrong, but he seemed frustrated as he walked toward the tunnel.

There were some ugly shot attempts by the Wizards without their star guard on the floor, but they made enough plays defensively to hold on.

Embiid cut the lead to one when he threw down an alley-oop dunk from Harden, but Porzingis made a 3-pointer to make it 111-107. With 2:05 remaining, Embiid missed the first of two free throws — his only miss in 14 attempts from the line.

With the score 111-108, Embiid fell while driving and lost the ball out of bounds with 1:29 to play. About a minute later he again had the ball down three, and this time Washington's Deni Avdija reached in and knocked it away.

The Wizards entered the game as healthy as they'd been all season, although Beal's exit now puts that in question. Washington has rebounded from a 10-game losing streak by winning three of its last four, with victories over Phoenix, Sacramento and Philadelphia.

The Wizards turned the ball over nine times in the first quarter and still led 32-30 despite 16 points by Embiid. Beal had 11 in the period.

Washington took better care of the ball in the second, and the Wizards took their biggest lead of the game at 74-58 when Porzingis got a friendly bounce on a 3-pointer early in the third.

76ers: Philadelphia was without Tyrese Maxey, who has been recovering from a broken left foot and hasn't played in over a month.