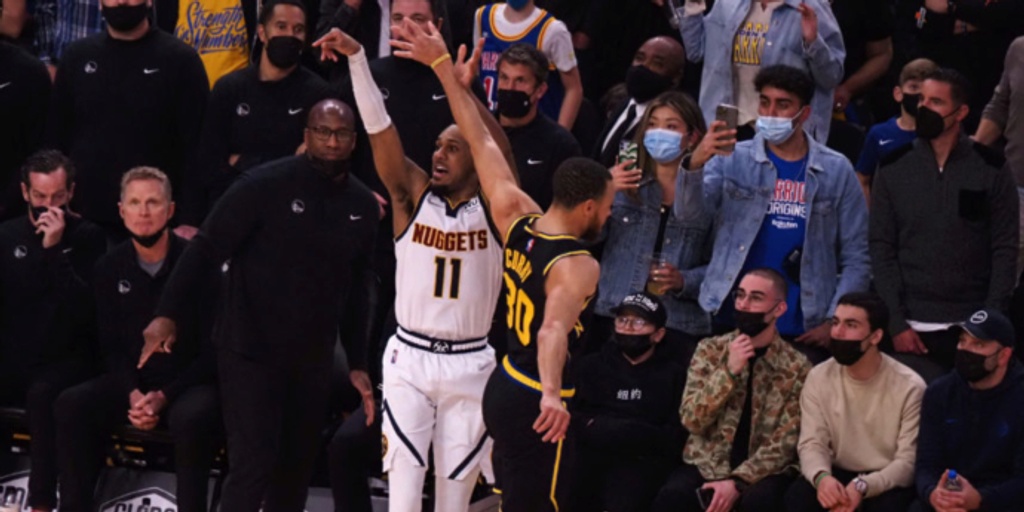 SAN FRANCISCO (AP) — The Golden State Warriors wanted to go into the All-Star break on a winning note after a tough stretch.

Still, the improved defense against Denver had coach Steve Kerr happy with the strides — even if it turned out Nikola Jokic and Monte Morris were too much of a load to stop down the stretch.

Morris hit a 3-pointer over Stephen Curry from the right wing as the final buzzer sounded and the basket held up on replay review, sending the Denver Nuggets past the Golden State Warriors 117-116 in a frenzied final minute Wednesday night.

“Monte made a clutch bucket,” Curry said. “The last thing you can do in that situation is give up a 3.”

Curry hit an off-balanced 20-foot jumper with Morris on him moments before and converted the three-point play with 5.9 seconds left to finish with 25 points. Curry had just missed a step-back 3 with 21.2 seconds remaining, when Morris secured the rebound and drove for a go-ahead layup to put Denver up 114-113 with 14.9 seconds left.

Splash Brother Klay Thompson scored 16 points and Jordan Poole added 15 off the bench as Golden State settled for a 42-17 record going into the All-Star break. And speaking of All-Stars, Curry, Draymond Green and first-timer Andrew Wiggins were honored before the game alongside their children in an especially sweet moment.

“I told the guys if we continue to play with that kind of fight and connection then we’re going to be in good shape after the break,” Kerr said.

Jokic had 35 points and 17 rebounds — 11 and 8 after the first quarter — for Denver, which won its third straight and fifth of six. His 3 with 6:26 remaining got the Nuggets within 98-94 before a 3-pointer by Thompson moments later. Jokic's big night on the boards helped Denver to a 48-38 rebounding advantage.

He planned to take the final shot.

“I just wanted to go in the middle of the paint and shoot a hook shot,” he said. “I just saw Steph and he was helping a little bit and Monte was wide open so I just passed the ball.”

Denver got the ball back with 45.4 seconds left down 113-110 and Jokic made a layup to help spark the comeback.

“He’s the reigning MVP. He was down there scoring at will in the fourth quarter at the rim,” Kerr said. “... Our defense was much, much better, Jokic just took over the game.”

Bryn Forbes scored 22 points and Morris returned from a three-game absence in the concussion protocol to finish with 13 points and six assists for a Nuggets team that also won 89-86 on the Warriors' home floor Dec. 28.

Gary Payton II had 12 points on 5-for-8 shooting for Golden State on the heels of a lackluster 119-104 road loss to the Clippers on Monday night.

Kerr started Payton to have his stingy defensive presence and the crafty guard made six steals.

While Kerr said he's “thrilled with where we are, thrilled with our team's record and overall performance" so far, he had been “disappointed” with some of the recent struggles the past couple of weeks despite the normal ups and downs of an 82-game season.

He said this loss stung and would keep him up and “I'm going to kick myself over some things tonight."

“It’s a tough way to go into the break but I like the way we all played,” Curry said.

Draymond Green has resumed on-court basketball work as he rehabs disc injury in his back that caused him calf trouble. The Warriors announced he is progressing well and is on target to return sometime after the All-Star break, and it is hoped he will soon be able to practice fully again.

“This was kind of the message that I heard from day one, that everyone felt really positive that given time and rehab that there would be a good result,” Kerr said. "That seems to be where we are heading.”

Rookie Jonathan Kuminga, who scored 12 points, was named a replacement for the Rising Stars event at All-Star Weekend.

“I was disappointed he wasn't selected in the first place,” Kerr said of the seventh overall draft pick. “He's clearly one of the best rookies out there.”

Nuggets: F Zeke Nnaji (right hamstring tightness) missed his third straight game. “We hope to get him back coming out the of the All-Star break,” coach Michael Malone said. ... Denver's 12 first-half turnovers led to 18 Warriors points. ... Denver improved to 10-12 on the road vs. the Western Conference.

Warriors: C James Wiseman, recovering from right knee surgery, has put together a few solid weeks of on-court work and the plan is to continue to push him to see when he might be closer to a return. “It's great news,” Kerr said. ... The Warriors committed just three first-half turnovers but 11 total.

Nuggets: Denver will return to Northern California to start the second half, visiting Sacramento next Thursday before hosting the Kings two days later.

Warriors: At Portland next Thursday following the All-Star break. Golden State has lost its last four on the road to the Trail Blazers since a 115-105 victory at Moda Center on Dec. 29, 2018.