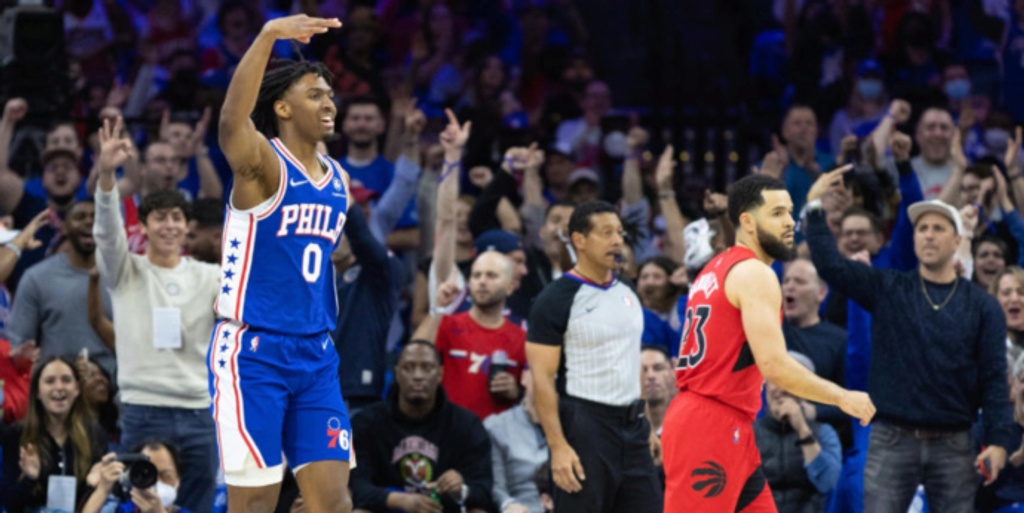 Maxey breaks out for 38 points, 76ers beat Raptors in Game 1

Tyrese Maxey had the breakout game of his young career, scoring 21 of his playoff career-high 38 points in the third quarter to lead the Philadelphia 76ers to a 131-111 victory over the Toronto Raptors in Game 1 on Saturday night.

James Harden had 22 points and 14 assists in his first Eastern Conference playoff game as a Sixer. Joel Embiid, the NBA scoring champion, had 19 points and 15 rebounds. They combined to only make 11 of 32 shots from the floor.

Tobias Harris scored 26 points for the Sixers, trying to get past the second round for the first time since 2001. They host Game 2 on Monday.

The opener belonged to Maxey. The 21-year-old Maxey is the youngest Sixer ever to score at least 30 points in a playoff game.

Sixers fans roared for “Maxey! Maxey! Maxey!" after each electrifying play -- and he crammed a season's worth into the third as he dismantled the Raptors.

He swished a 32-footer late in the period for a 20-point lead and sent his teammates on the bench into a frenzy. The Raptors were stunned and had no answer for him: Maxey made 7 of 8 shots overall, both 3s and all five free throws in 12 minutes.

Pascal Siakam scored 24 points for the Raptors, who lost rookie Scottie Barnes to an ankle injury to worsen what was already a miserable night. OG Anunoby scored 20 and Fred VanVleet added 18.

The Sixers took control in the first 24 minutes and Maxey stepped on the gas in the third against a team that won the season series 3-1 (with Embiid and Harden in the lineup for the last two).

Maxey, the 6-foot-2 bundle of energy out of Kentucky, led the fast start early with a pair of 3s and 10 quick points that had the Sixers rolling with a double-digit lead.

The Sixers are Embiid and Harden’s team, and as they go, so go the Sixers. But Maxey gives the 76ers a Big 2 3/4 and was more than just an able replacement for the traded Ben Simmons.

Maxey emerged as a reliable scoring option -- 18.7 points and 48% on 3s after the All-Star break -- and was on target from tipoff against Toronto. He made 6 of 10 shots and his 15 points in the first half were one shy of matching his playoff high set last season in Game 6 against Atlanta.

Ah, yes. Atlanta. The Hawks series still had Philly on edge this week, as the stench of three home losses and a second-round exit as the No. 1 seed wafted into this season.

The Raptors inched within 11 in the third but Harden -- the bold trade deadline acquisition made for these moments -- buried a 3 and a layup.

Harden then heaved a two-handed bounce pass from midcourt that Maxey caught in stride for a high-flying, reverse layup. The Sixers led by 18, Toronto called a timeout and the Philly crowd went wild. Maxey hit another 3 and it was 91-76.

The Raptors only seriously challenged late in the first half. Embiid was hit with a flagrant after he clobbered Barnes on a drive. Barnes made 1 of 2 free throws and the Raptors scored off his miss to pull to 48-42.

Embiid, though, made the Raptors pay moments later. He sneered on a bucket and forced VanVleet (who fouled out in the fourth) to his third foul. Embiid converted the three-point play for a 57-42 lead.

Maxey took it from there.

Barnes grabbed his left foot and was in apparent pain after Embiid stepped on his foot in the fourth. He needed help to the locker room. Barnes, a top contender for Rookie of the Year, averaged 15.3 points in 74 games. ... F Thaddeus Young left with a sprained left thumb

Raptors: Had just two offensive rebounds in the first half. ... Chris Boucher also fouled out.

76ers: Rapper Meek Mill and boxer Floyd Mayweather Jr. sat courtside. ... Turned the ball over on the first possession of the second half. ... Matisse Thybulle had three points in 19 minutes. He won’t be available for Games 3 and 4 in Toronto because he’s not fully vaccinated.