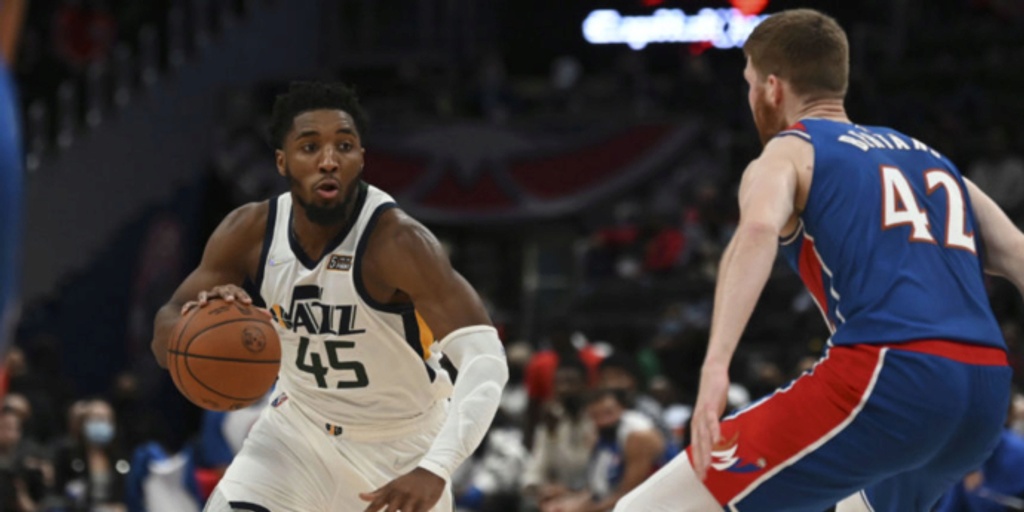 Donovan Mitchell scored 28 points, Rudy Gobert had 20 points and 11 rebounds and the Utah Jazz extended their winning streak to seven games with a 123-98 victory over the Washington Wizards on Saturday night.

Hassan Whiteside added 18 points and 14 rebounds off the bench as the Jazz completed a perfect four-game East Coast trip.

“I think we're a better team now than when we left,” Jazz coach Quin Snyder said. “That's hopefully what competition does for you.”

Mitchell shot 4 for 9 from long distance, while Gobert and Whiteside combined to go 17 of 19 from the floor as Utah took control in the third quarter after trailing by a point at halftime.

“I think tonight, the way we played on both ends and the mindset that we had was really like a contender mindset,” Gobert said. “Every quarter we got better.”

Bradley Beal scored 21 points for the Wizards, who lost for the fourth time in five games and for the ninth time in 14 after a fast start to the season. Daniel Gafford added 14 points and 11 rebounds for Washington.

Washington led 51-50 at the break after a first half that included six ties and 11 lead changes. The Wizards were within three before the Jazz closed the third quarter on a 13-4 run.

“It just kind of fell apart from there,” Gafford said. “It was something that we could've easily fixed, but at the time there was a lot of frustration out there. Guys weren't hitting shots. It happens.”

Mitchell hit a driving layup, fed Whiteside for an alley-oop, then dunked during the stretch that gave Utah its first double-digit lead, 77-67.

Mike Conley put the Jazz up by double figures for good on a possession later, before feeding Gobert for a layup that made it 81-69 at the end of the quarter.

‘A REALITY FOR A WHILE’

With Kuzma presumably dealing with a potential exposure to COVID-19, Gobert weighed in on dealing with the continued threat of the pandemic.

“We see what's going on and we keep moving, we keep respecting the protocols, and at the same time, we keep doing what we do as a team," Gobert said. “It's unfortunate when someone tests positive, but it's going to be a reality for a while, so we've got to just live with it."

Gobert tested positive for COVID-19 in March 2020, a turning point in the early pandemic which set in motion widespread cancellations in the sports world and beyond.

Utah's perfect four-game trip is its longest continuous stretch on the road without defeat since it also won all four games of a trip East from March 2-7, 2020.

Before the trip, the Jazz were 1-2 visiting Eastern Conference foes.

Jazz: Converted nine alley-oop dunks ... Their halftime deficit was their first during the win streak. ... Gobert’s double-double was his 20th of the season, while Whiteside had his fourth. Whiteside’s 14 rebounds were a season-high.

Wizards: Gafford’s double-double was his fourth of the season and the first since he had three in a row from Nov. 27-Dec. 1. ... F Kyle Kuzma was placed into the NBA’s health and safety protocols before the game.