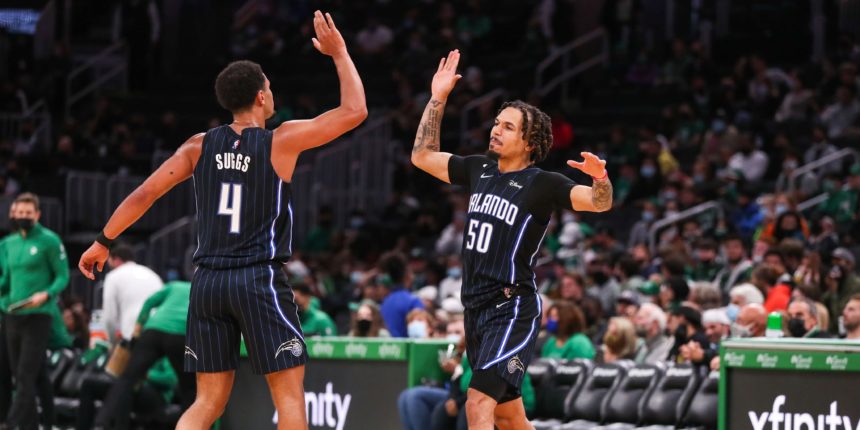 Jamahl Mosley waited a long time for this chance. He’s not about to let very low expectations douse his enthusiasm.

The new coach of the Orlando Magic understands that this season, his first as an NBA head coach, is part of a massive rebuild that started last spring when the team traded away its best players — Nikola Vucevic, Evan Fournier and Aaron Gordon.

Here’s what he has now: a roster of players with a combined zero NBA championships, zero All-Star appearances, and somewhere around zero expectations.

“The great part of this group is this is one of the most tied-together, push-the-next-man teams I've ever been around," Mosley said. “So whatever the noise about us is, I don't think they listen. I think they block it out. We just have to get better every day. We have to improve mentally, physically, just making sure we're healthy. ... Do that, the results always take care of themselves."

He also wants them to ring the bell.

Along one of the sidelines on the Magic practice court is a bell, which gets put into use when a player makes a winning or selfless play of some sort — diving for a loose ball, that sort of thing — or shoots exceptionally well in a drill.

The more times the bell gets heard a day, the closer the Magic will be to getting where Mosley wants.

“When we’re making those hustle, winning plays, that’s what’s going to get us over the top," Mosley said.

There is a ton of potential in the backcourt, with the development of rookie shooting guard Jalen Suggs and second-year point guard Cole Anthony major keys for Orlando to start the season. Former No. 1 pick Markelle Fultz remains sidelined indefinitely after tearing an ACL eight games into last season.

Mosley toiled through 15 years as an assistant — four in Denver, four in Cleveland and the last seven in Dallas — to get this chance.

“I’ve worked with some obviously great coaches and I don’t have the same style that they have,” Mosley said. “But what I’ve known is what’s worked for me and how I came into this league as understanding that players want to have their voices heard. Now, obviously there’s a standard that needs to be set for how we’re going to play and what we’re going to do and that’s going to come down to my decision-making."

The Magic return only 45% of their scoring from last season, when they needed 28 players and had a franchise-record 32 starting lineups in 72 games — after using 26 different lineups in the previous two seasons combined.

About half of the players on the roster will be 24 or younger when the season starts, with four players — Cole Anthony, R.J. Hampton, Jalen Suggs and Franz Wagner — all either 20 or 21. Combined, everyone on the Magic training camp roster had scored a total of 35,909 points in their NBA careers. That’s only 542 points more than LeBron James has scored in his career.

No team in the NBA has a worse combined record over the last 10 seasons than Orlando, which has posted a .369 winning percentage in that span. Sacramento (.383) is next on that list, followed by Minnesota (.384). But in perhaps a sign of hope, the next two worst records over the last decade belong to Phoenix (.404) and New York (.405); the Suns went to the NBA Finals last season and the Knicks made the playoffs.

Mosley is one of five coaches who has never been the boss at the NBA level before, joining Boston’s Ime Udoka, New Orleans’ Willie Green, Portland’s Chauncey Billups and Washington’s Wes Unseld Jr. Of those five, he and Unseld are the only two who also never played in the NBA.

A five-week stretch from Nov. 15 through Dec. 22 looks arduous for Orlando, with 15 out of 20 games on the road and the first five of those all against playoff teams from last season — including two in a row at NBA champion Milwaukee. The Magic visit the Bucks Nov. 20 and 22, then play host to the champs Dec. 28 and 30. The last stretch of the season is favorable, with 11 of Orlando’s final 15 games scheduled to be at home.