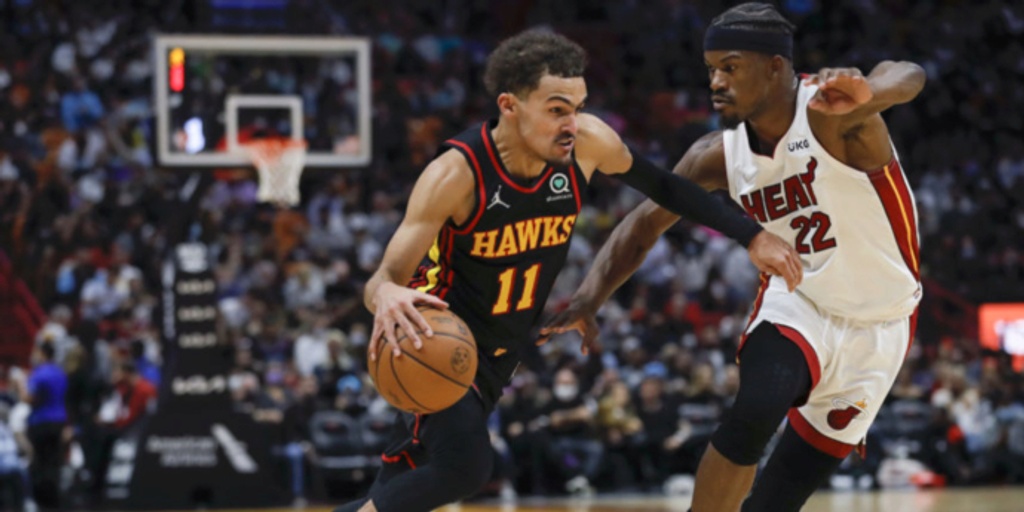 Heat open their quest for a title Sunday, with Hawks in way

The 2021 NBA Finals had been over for approximately three minutes, and newly crowned champion P.J. Tucker was already overcome by one very distinct emotion.

“I've got to feel this again," Tucker said.

That's why he left Milwaukee for Miami last summer. It's why Kyle Lowry, a 2019 champion with Toronto, also joined the Heat this past offseason. It's why Markieff Morris, a 2020 champion with the Los Angeles Lakers, is with the Heat now. It's why Udonis Haslem, who turns 42 in a couple of months, is still with Miami and seeking a fourth ring.

Regular-season successes were nice, but meant little to the Heat in the grand scheme of things. What matters is the postseason and the pursuit of a championship, which truly starts Sunday when the top-seeded Heat begin an Eastern Conference first-round series against Trae Young and the eighth-seeded Atlanta Hawks.

Miami had two things for practice Saturday that it didn't have on Friday — an opponent, and a starting center. The Hawks earned their playoff spot by beating Cleveland in a play-in game Friday night, and on Saturday morning Bam Adebayo was back at practice for the first time all week after clearing the NBA's health and safety protocols.

With Adebayo, Miami has its big man.

Starting center Clint Capela has been ruled out for Game 1, and may wind up missing much if not all of the series, after injuring his right knee on Friday. Tests on Saturday ruled out major damage, but Capela's status for the short-term remains a mystery.

But the Hawks may get forward John Collins — who missed the final 16 regular-season games and both play-in contests — back on Sunday, listing him as questionable with a strained right foot and a sprained right ring finger.

That said, the Hawks still have Young, one of the most dynamic scorers in the game. He had six points at halftime of the win-or-go-home game against Cleveland on Friday, then had 32 more points on 10-of-14 shooting in the final two quarters.

The Hawks went 1-3 against the Heat this season, though neither side expects that to mean much come Sunday.

“It’s exciting,” Young said of the matchup. “We get another opportunity. They’ve been clicking on all cylinders, especially here recently. They’ve gotten a little bit more rest than we have, so we’ve got to be ready to bring it. We know the crowd’s going to be crazy, the environment’s going to be fun, so we’ve got to be ready to be locked in and take care of business.”

Miami went to the finals in Jimmy Butler's first season with the Heat, the year that was interrupted by the start of the pandemic and then resumed in the bubble at Walt Disney World. Last season led to another playoff berth, but Miami was overwhelmed and swept in the first round by Tucker and the Bucks.

“We all want to win a championship," Butler said. “That’s our goal. ... Kyle has been telling us how to make it happen along with Keiff, along with Tuck, along with UD — the champions that we do have. We've got great leadership and we got to find a way to get 16 of them.”

Atlanta is 2-0 in previous series against the Heat, both first-round matchups that went the distance. The Hawks won 3-2 in 1994, then 4-3 in 2009 in Erik Spoelstra’s first season with the Heat. It’s the second time Spoelstra and McMillan have faced off in the playoffs; Miami swept Indiana in 2020, and the Pacers fired McMillan later that offseason.

Miami went 3-1 against Atlanta; the team that shot better from the field and shot better from 3-point range won all four games, which isn’t exactly rocket science. Young averaged 25.5 points in the four games. Tyler Herro averaged 20.0 for Miami and the Heat went 3-0 in the three games in which he played. He didn’t play in the lone Atlanta win, nor did Lowry. The Hawks had double-digit leads in three of the four games against Miami, but the Heat rallied to win two of those contests.

Nearly six years have passed since Miami won a playoff game in its own building. It was Game 6 of a second-round series against Toronto on May 13, 2016. The Heat are 0-4 in playoff games in Miami since; the run to the 2020 NBA Finals was in the restart bubble near Orlando, Florida.

Counting Friday’s win at Cleveland in the play-in tournament, Atlanta is 7-4 in road playoffs (or playoff-type) games since the start of last season. The Hawks went 2-1 at New York in Round 1 last season and got a series closeout win at Madison Square Garden, 3-1 at Philadelphia in the East semifinals (winning Game 7 on the road) and 1-2 at Milwaukee in the East finals.

FanDuel Sportsbook has the Heat as the second-biggest favorite in the East in Round 1, behind only Milwaukee — an overwhelming favorite to beat Chicago in their first-round series.