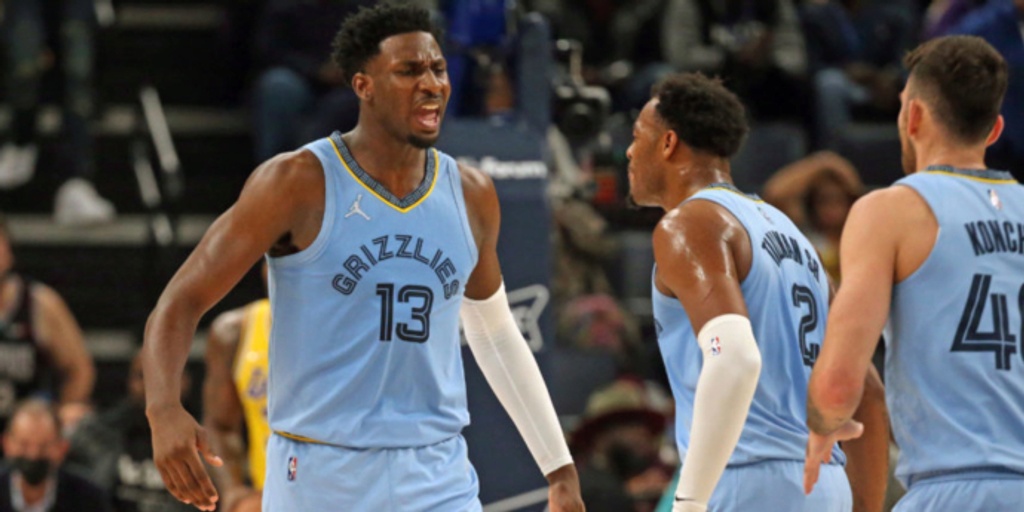 MEMPHIS, Tenn. (AP) — Jaren Jackson Jr. scored 25 points, Desmond Bane added 23 and the Memphis Grizzlies pulled away in the fourth quarter for a 108-95 victory over the Los Angeles Lakers on Thursday night.

Tyus Jones and De’Anthony Melton added 12 points apiece for Memphis, which won for the sixth time in seven games.

LeBron James had a triple-double with 20 points, 11 assists and 10 rebounds, and Anthony Davis led the Lakers with 22 points. Talen Horton-Tucker and Avery Bradley each added 10 points.

Memphis opened the fourth quarter on a 9-2 run, pushing the lead to double-digits for the first time for either team. With that spurt, Memphis extended its lead to 94-80. Los Angeles never got its deficit to single digits.

The Grizzlies were without leading scorer Ja Morant and their top defender, Dillon Brooks, who are in health and protocol protection. That put Memphis at a personnel disadvantage.

Memphis, which leads the league in points in the paint, was forced into long-range shots early by the Lakers defense, and the shooting percentage reflected the situation.

But in the second quarter, Memphis was able to run more. The transition baskets contributed to the Grizzlies building a 59-53 lead at the half.

The Lakers were having trouble holding onto the ball, and by the end of the third quarter had committed 19 turnovers that lead to 22 Memphis points. That helped the Grizzlies carry an 85-78 lead into the fourth.

Lakers: James and Davis were listed on the team’s injury report as probable — James with rectus abdominis strain; Davis with a left thumb sprain — but both played. … The Lakers saw their four-game winning streak in the series end. … James’ steal in the first quarter was the 2,086th of his career, moving him past Karl Malone for 11th on the all-time list.

Grizzlies: F Kyle Anderson returned to action after missing four games with back soreness. … Had 13 steals in the first half, nine in the second quarter, setting a franchise record for steals in a quarter.

Lakers: At Oklahoma City on Friday.