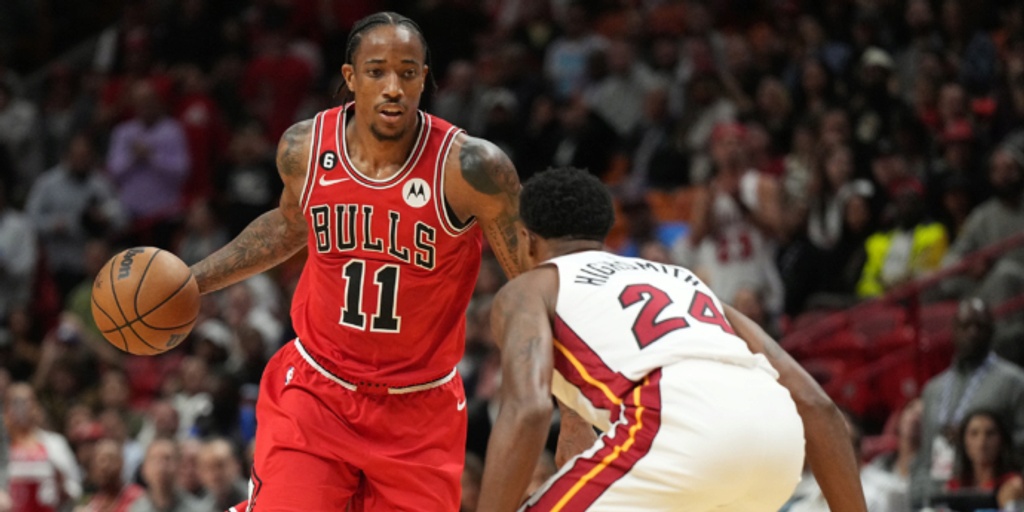 MIAMI (AP) — DeMar DeRozan scored 28 of his 37 points in the second half, Ayo Dosunmu added 17 and the short-handed Chicago Bulls beat the Miami Heat 116-108 in the season-opener for both teams Wednesday night.

Nikola Vucevic had 15 points and 17 rebounds for the Bulls, and Goran Dragic added 12 off the Chicago bench.

Jimmy Butler scored 24 points and Tyler Herro added 23 for Miami, which got 22 from Max Strus and 12 from Bam Adebayo.

The Bulls played without All-Star guard Zach LaVine, citing left knee injury management. That knee had him in and out of the lineup last season and required surgery in May. LaVine played in three of Chicago’s preseason games and experienced discomfort in recent days — which Bulls coach Billy Donovan said is to be expected, given that LaVine was limited for much of the summer.

“We’re just going to have to get our hands around this,” Donovan said. “But like the medical guys said, he has to ramp up. There’s no way of getting around it. You just can’t tiptoe around it and let him kind of ease his way into the season.”

The Bulls did just fine without LaVine — who signed a $215 million deal over the summer.

Chicago started the second half on a 34-19 run, breaking open what was a 59-59 halftime tie and turning it into a 93-78 lead. The margin was down to 10 going into the fourth, and the Heat kept chipping away.

Bulls: Dragic was 4 for 4 from 3-point range in the first half. The last time he was at least 4-for-4 from beyond the arc in a first half was Jan. 9, 2021, in Washington, when he played for Miami. ... Chicago turned 19 Miami turnovers into 17 points. ... DeRozan also had nine assists and six rebounds.

Heat: Team captain Udonis Haslem, in his 20th and — he says — final season-opener, addressed the crowd pregame and offered remarks in support of Brittney Griner, the WNBA star who remains incarcerated in Russia. ... Caleb Martin became the 76th player in Heat history to get an opening-night start. ... Victor Oladipo (left knee) was inactive. ... Kyle Lowry had two points on 1 for 7 shooting.