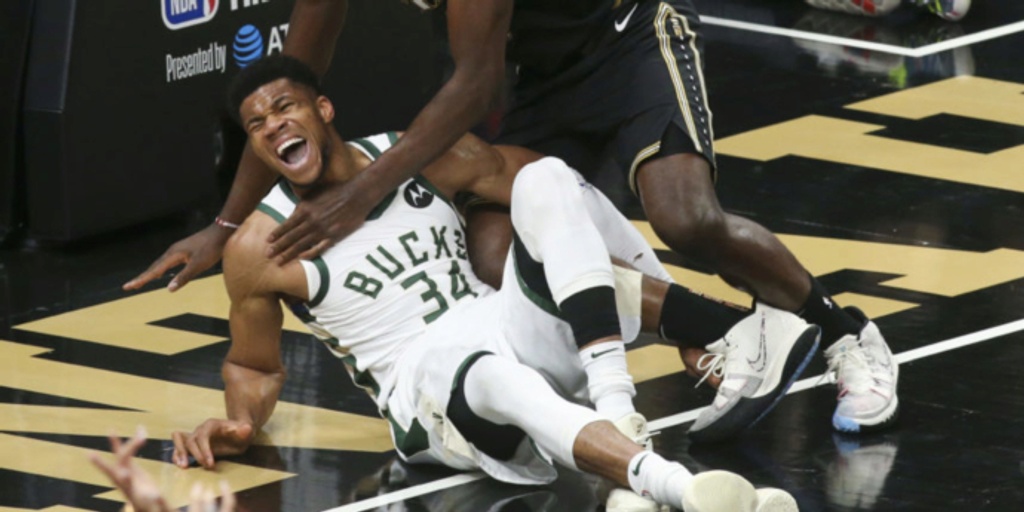 ATLANTA (AP) — The Milwaukee Bucks suddenly are facing the daunting challenge of possibly having to move forward in their Eastern Conference Finals without their two-time MVP.

Giannis Antetokounmpo sustained a hyperextension of his left knee and and was forced out of the Bucks' Eastern Conference Finals game against the Atlanta Hawks on Tuesday night.

“It’s not good,” Bucks forward P.J. Tucker said. “It’s not good losing anybody on your team, and losing your best player stinks.”

The Hawks won 110-88, evening the best-of-seven series at 2-2. Antetokounmpo’s status for Game 5 at Milwaukee on Thursday night is not known.

Antetokounmpo was defending a jam by Hawks center Clint Capela with 7:14 remaining in the third quarter when his left knee appeared to buckle. He fell to the floor in obvious pain, grimacing and clutching his knee.

“We’ll take everything as it comes," Budenholzer said. "We’ll evaluate it. We’ve got a heck of a team, a heck of a roster. ... The guys will prepare. They’ll be ready.”

Antetokounmpo remained down for several minutes before rising and slowly walking to the locker room. He was supported by his brother, Thanasis Antetokounmpo, and a staff member, as he left the court.

It was a scary sight — and sound — for the Bucks.

Added Jrue Holiday: “I think just based on how he was grabbing his leg, it seemed like it was pretty bad.”

Antetokounmpo returned to the bench briefly before again heading to the locker room after the Hawks blew open the game by extending their lead to 20 points. Soon after, the Bucks announced he would not return.

“I don’t want to speak for him,” Budenholzer said when asked what Antetokounmpo told his teammates when he briefly returned to the bench. “I know historically, it’s impossible to keep him off the court, keep him away from his teammates. My guess is he wants to play and, if not, let his teammates know that he’s there for them.”

Following a slow start to the game, Antetokounmpo had scored eight of his 14 points in the opening minutes of the second half. Following the jam by Capela, the Hawks led 62-52 when the Bucks' star left the game.

The loss of Antetokounmpo appeared to derail the momentum of the Bucks' comeback.

“No. We’ve been around the game long enough to know guys are going to get hurt,” Holiday said. “You pray it’s not serious.”

Budenholzer said Antetokounmpo is "a big part of our soul and our fiber. I’m sure the human element and the concern is real. They’re trying to find a way to be there for him when he’s not on the court.”

The Hawks were without their leading scorer, Trae Young, who was held out with a bone bruise in his right ankle.

“There’s no excuses,” Tucker said. “Everybody is hurt. Everybody is battling injuries. You’ve got to fight through.”

Tucker said the Hawks' play without Young should serve as an example for the Bucks, especially if Antetokounmpo can't play in Game 5.

“Every play, lay it on the line and go out there and take it because tonight that’s what Atlanta did,” Tucker said. “They went out there and took it.”