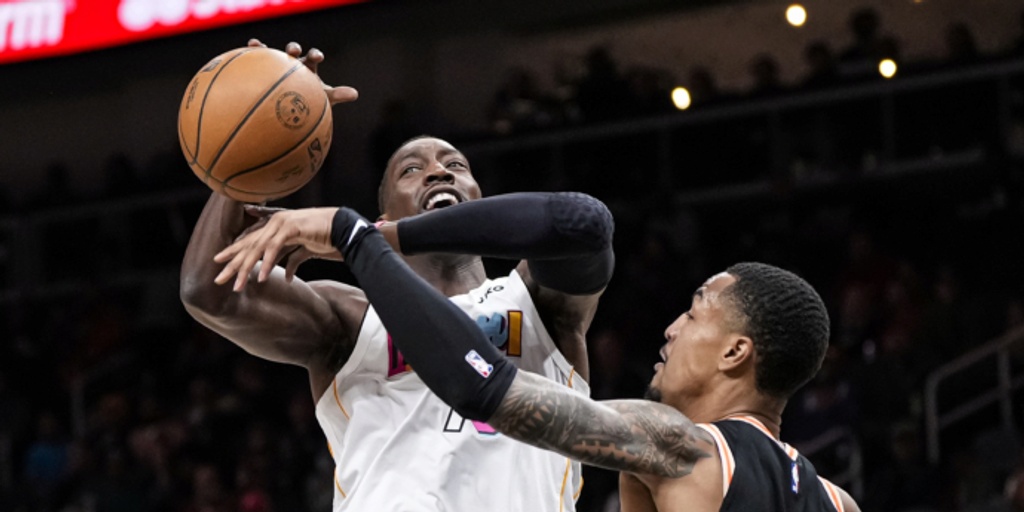 ATLANTA (AP) — Bam Adebayo scored 16 of his 32 points in the third quarter, Caleb Martin added 20 points and the Miami Heat snapped a seven-game road losing streak with a 106-98 victory over the Atlanta Hawks on Sunday night.

Adebayo, coming off a 38-point performance in a win over Washington on Friday, went 13 for 20 from the field as Miami, which improved to 2-7 on the road, won its third straight.

Miami listed 11 of its 16 players on the injury report before the game but overcame the potential setbacks by clogging Atlanta’s passing lanes and outscoring the Hawks 58-34 in the paint.

De’Andre Hunter’s left corner 3 for Atlanta gave made it 25-15 for the game’s first double-digit lead. Hunter scored 14 in the first half, Young had 13 and John Collins 11 as the Hawks led 60-51 at intermission. Strus and Adebayo each scored 14 for Miami.

Heat: F Jimmy Butler stayed behind in Miami to rehab his sore knee. Coach Erik Spoelstra did not rule out the possibility of Butler being back when the team visits Boston on Wednesday. ... Adebayo surpassed 5,000 career points. ... Strus (right shoulder impingement) started after missing the last two games. ... F Nikola Jovic (foot) did not play. ... Herro (left ankle sprain) played 40 minutes in getting the triple-double . ... C Dewayne Dedmon (left plantar fasciitis) had 13 points on 6 for 7 shooting. ... F Duncan Robinson (left ankle sprain) was ruled out.

Hawks: C Clint Capela, the league’s third-leading rebounder, missed the game with dental pain. He ranks seventh in field-goal percentage and ninth in blocked shots. ... Dating back to March 3, 2022, Atlanta had scored at least 100 points in 40 straight games, the third-longest streak in franchise history and the longest active streak in the NBA.