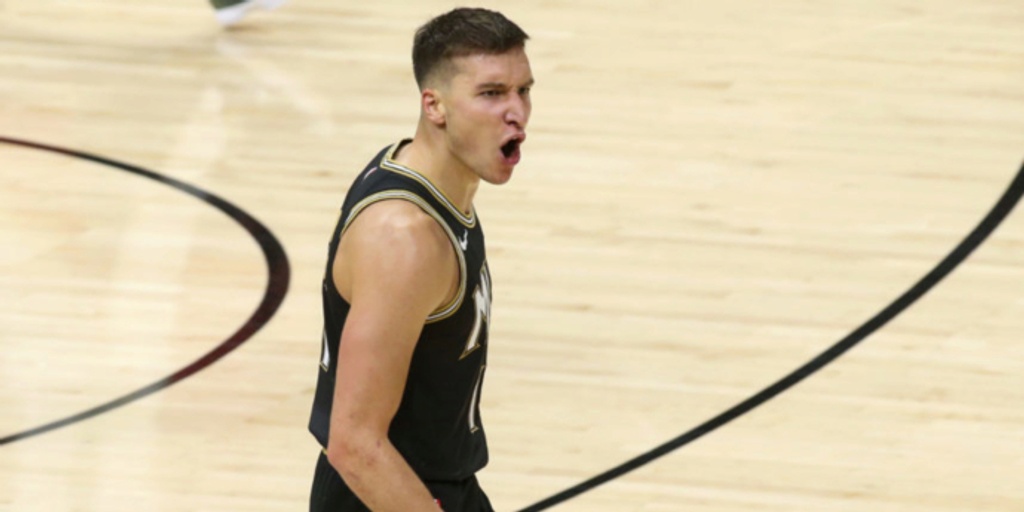 The Atlanta Hawks proved they are more than a one-man team, shaking off Trae Young's absence with a freak injury to even the Eastern Conference finals with a 110-88 rout of the Milwaukee Bucks in Game 4 on Tuesday night.

🗣️ @TeamLou23 after dropping 21 PTS on 7-9 shooting to go with 8 assists during his first-ever #NBAPlayoffs start! #ThatsGame @ATLHawks seek 3-2 lead in Game 5 Thursday at 8:30 PM ET on TNT pic.twitter.com/qjg3OVCqbV

And in another stunning twist to a series no one saw coming, two-time MVP Giannis Antetokounmpo hobbled off the court with an injured left knee, depriving the Bucks of their best player.

Lou Williams did a stellar job filling in for Young with 21 points, Bogdan Bogdanovic broke a series-long slump with 20, and the Hawks pulled away in the third quarter to tie the series at two wins apiece.

PERFECT 1st half for Lou Will 💯

The crowd after this Bogdanovic (36.1 FPTS) three 😳

Hawks up big on TNT! pic.twitter.com/HEsNWBk6Rb

Game 4 is Thursday night in Milwaukee.

Young was declared out about 45 minutes before tipoff, having sustained a bone bruise when he twisted his right ankle stepping on an official's foot along the sideline in Game 3. He watched from the bench in a black warmup suit, barely noticeable with a hood over his head and a mask across his face.

Turns out, he wasn't needed.

After a dismal first half for Antetokounmpo, who was held to six points and chunked up a pair of airballs from the free-throw line, the Greek Freak came out firing in the third quarter.

He scored eight points in the first 4 1/2 minutes — more than he managed in the entire first half — and sliced Atlanta's lead to 62-54 with a step-back jumper.

But, the next time down the court, Williams worked a pick-and-roll with Clint Capela, who went up for a dunk that Antetokounmpo tried to contest. The Bucks star landed awkwardly and went down in a heap, grasping at his left knee while a hush fell over the arena.

The entire Milwaukee bench came out to check on Antetokounmpo, who had to be helped to the locker room with what was diagnosed as a hyperextended knee. He returned briefly to the bench but never made it back to the court, heading to the locker room for good when the Hawks blew the game open.

Atlanta outscored the Bucks 25-8 the rest of the quarter to seize a commanding 87-62 lead.

The Hawks led 51-38 at halftime, holding the Bucks’ to their lowest-scoring half of the postseason.

Milwaukee made only 14 of 41 shots from the field — including 5 of 23 beyond the arc — to go along with nine turnovers.

Two nights after tying his career playoff high with 38 points in a Game 3 victory, Milwaukee's Khris Middleton was held to 16 points on 6-of-17 shooting.

He missed all seven of his 3-point attempts.

Young was at the team's closed morning walkthrough and supposedly appeared well enough to play, according to teammate Onyeka Okongwu.

It was all just a ruse, likely designed to throw a little uncertainty into the Bucks' planning.

With Young out, the Hawks needed some little-used players to step up.

No one was bigger than Cam Reddish.

In just his second appearance since February, Reddish scored 12 points, pulled down five rebounds and came up with two steals.

Reddish missed the final 42 games of the regular season with an Achilles injury and the first two rounds of the playoffs. His first appearance since Feb. 21 came during garbage time of Milwaukee’s blowout win in Game 2.

Reddish had to play a much bigger role in Game 4, coming on less than seven minutes into the game in the first wave of substitutions. He was joined by another seldom used Atlanta player, Kris Dunn.

With the crowd mocking him mercilessly, counting off the number of seconds he took to shoot, Antetokounmpo missed all three of his free throws in the first half.

In fact, he only hit the rim on one of them, which had the Atlanta fans jeering him even louder.

Bucks: Milwaukee's lowest-scoring first half of the regular season was a 31-point effort at Philadelphia on March 17. They wound up winning that game 109-105 in overtime. The Bucks had not scored fewer than 41 points in a half during the playoffs. ... Jrue Holiday was his team's top scorer with 19 points.

Hawks: Dunn made his first appearance of the playoffs. In fact, it was only the fifth game he's played all season. .... Milwaukee's 38-point half was the lowest allowed by Atlanta in a playoff game since holding Boston to 33 in 2016. ... The Hawks came out spreading the ball around. Four players were in on first 10 points. ... Capela was helped to the locker room with a towel over his face after taking an elbow in the closing minutes.